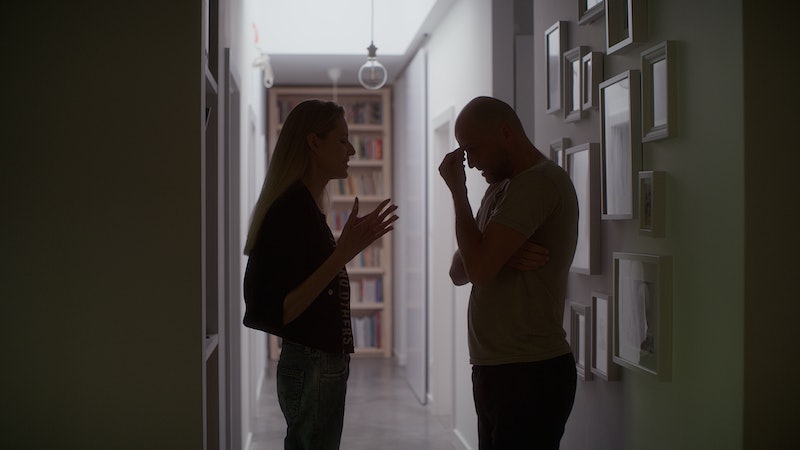 Sometimes you're a giant jerk. We all are. Were human. But sometimes you're just minding your own business, doing you, and it turns out you're doing things you didn't even know were totally inconsiderate to your SO. It happens. But, like other times when we learn our behavior or interests are problematic, the first step in handling our scandal is owning it.

When I worked as a Domestic Violence Victim Advocate and Planned Parenthood Certified Responsible Sexuality Educator, I spoke with a lot of people who felt so much pent up anger and resentment about a life full of tiny annoyances. They didn't deal with them at the time, and it became kind of like death by a thousand paper cuts. Bringing up the ways you feel your partner is being inconsiderate doesn't have to be a huge fight that positions you as the bad guy. It can be as simple as saying "can you please not do that?"

And if you suspect you're the offender, but aren't quite sure what you're doing wrong, I'm here to offer a couple ideas that might help you pin down your obnoxious behavior. Because being in a relationship is about compromise, and sometimes that compromise means putting your dirty socks in the dang hamper when you take them off.

1. You Text All The Time

I know it's almost impossible to ignore the pull of the flashing blue light on your phone. I get it. But if your face is always in your phone when your partner is around, that's a recipe for making them feel ignored and unimportant. And while you're laughing at the funny picture your friend posted to your wall, your partner is feeling neglected. Sometimes, especially during dates and important conversations, you have to forget about your phone and focus on your partner. And even when you're just on the couch chilling, you still have to make an effort to be present.

Do you assume too much? For example, do you walk into the living room and turn on the TV without asking your partner what they want to watch? That's pretty inconsiderate, even if your partner seems pretty chill about it. Do you always chose the movie or the restaurant? Do you make plans that involve both of you without checking in first? That stuff is fine once in awhile, but even if your partner truly doesn't mind, it's still better, and nicer, to take their opinion into consideration once in awhile. Or always.

3. You Waste Their Time

Do you always show up late to things, or always make you both late because it took you too long to get ready? Do you mess around on the computer or the phone instead of getting ready? This is a move that's actually unhealthy passive aggressive behavior. It's a way of not admitting that you don't want to go somewhere or do something. It's also an inconsiderate waste of your partner's time. Don't make them wait!

What's more inconsiderate then half-assing something so your partner has to pick up your slack? Really? Don't do this. If you're responsible for a chore or task, and you know that as long as you show an effort, your partner will swoop in, it's just as bad as not doing it in the first place. Maybe worse. It's also an example of passive aggressive behavior.

5. You Let The Little Things Slide

You might be saying to yourself, "What's the big deal if I occasionally forget to put the toilet seat up or leave my clothes on the floor?" And you'd be right. It's not the end of the world. But your partner might be thinking "Why would you keep doing this when we've talked about how it bothers me?" If you do it enough, it's less about what you're doing and more about the fact that you're not being considerate of your partner's feelings.

6. You Disrespect Their Stuff

When you're done playing your partner's video games, do you leave the discs face down on the shelf or do you put them back in the case? When you borrow clothing, do you ruin it? Do you go in the refrigerator and eat food that says "I'm saving this, do not eat it or I will divorce you" on it? If so, that's totally inconsiderate. You might not think it's a big deal at the time, but what you're really saying is that you don't have any respect for your partner's belongings, which often translates to not having respect for their interest and feelings, too.

If your partner is always giving you compliments, doing little things to make you feel loved, and thinking about you in many of the things they do (ie: buying you chocolate milk every time they're at the grocery store) and you never do the same, that could be the inconsiderate thing that is upsetting your partner. We all need to feel loved and valued. We also need to feel like our efforts are recognized. Plus it never hurts to feel special sometimes, too.

If you're a signal or multiple offender of things on this list, there's good news. These are all easy habits to change. Do it for love.