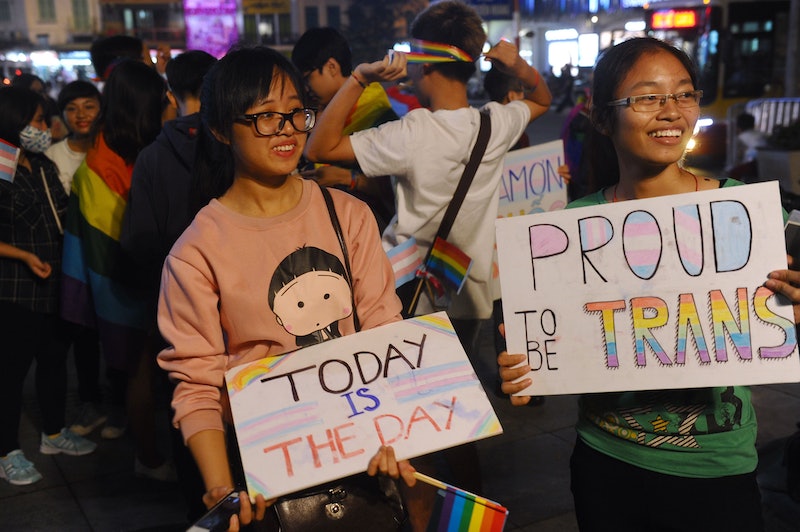 Day by day, we're coming to live in a world where more progressive laws and protections exist to protect LGBTQ people. Each step is an accomplishment and a celebration. That said, we often talk about what issues the LGBTQ community faces as a lump sum, and forget some of the factors which make life harder (sometimes, much harder) for certain identities. For the transgender community, there are significantly fewer rights and protections available than for people who identify as gay, lesbian, or bisexual. This is true pretty much across the board, and it's been a problem for a long time.

We can consider this harsh reality through a number of lenses: Perhaps it's because the transgender community is often the least visible, often portrayed as villains in the media, or because they face constant vilification from some media outlets, but the transgender community faces a lot of additional barriers in their attempts to access basic human rights and needs.

Regardless to what factors contributed to the transgender population facing additional barriers to equal rights, the reality is, the transgender community needs our help and support. These four issues are by no means the be-all and end-all, but fighting for them will go a long way.

This is a big one: Although it's true that some providers and communities are working towards better education as a way to make interactions with medical professionals and staff more inclusive, the medical community routinely fails transgender patients. Luckily, there is progress being made in finding professionals to begin with: Options like myTransHealth exist to help connect transgender individuals to health care providers. Before all of this, though, is the reality that many transgender people are denied insurance coverage because of their gender identity.

Finding a place to live is stressful for pretty much anyone, between the rising costs of rent and the qualifications you need to get a mortgage. If you identify as transgender, however, your likelihood of finding a place to live — and not being evicted from it because of your gender identity — is scarily low. One out of five transgender people in the United States have been discriminated against when trying to find housing, according to the National Center for Transgender Equality; additionally, one out of 10 have been evicted from their homes because of their gender identity. Only 17 states, plus the District of Columbia, have legal protections against discrimination for transgender people searching for housing.

Furthermore, for the many transgender individuals who experience homelessness, data presented from the National Transgender Discrimination Survey presents some pretty horrifying responses: 55 percent of transgender people who stayed in homeless shelters said they were sexually harassed while there, while 22 percent said they were sexually assaulted while there. Additionally, 25 percent said they were victims of physical assault. Thankfully, slowly but surely, there are safe havens for transgender youth popping up, as well as progress being made for adults — but we still have a long way to go.

Even outside of this study, which has some pretty sobering results, much medical research suggests that the transgender community is prone to anxiety and depression. This prompts the question: If a community is prone to serious mental illness, and don't have access to medical care, what are they to do? The situation is painfully unfair and life-threatening.

The suicide rates for the transgender community are staggeringly high. Research estimates that 40 percent of transgender individuals will attempt suicide in their lifetime. This number is horrifying as it is, but compared to the national average of 4.6 percent, it feels additionally frightening. In terms of youth, the numbers are also frightfully high: Studies estimate that before the age of 20, many transgender youth will attempt suicide at least once. Considering that 75 percent of transgender youth report feeling unsafe at school and over 60 percent experience bullying online, it is no surprise that transgender youth may feel especially isolated. Family acceptance seems to be the key factor: When families accept their transgender children and teenagers, their likelihood of developing depression and risk for suicidal tendencies drops significantly.

But we can all help change that.