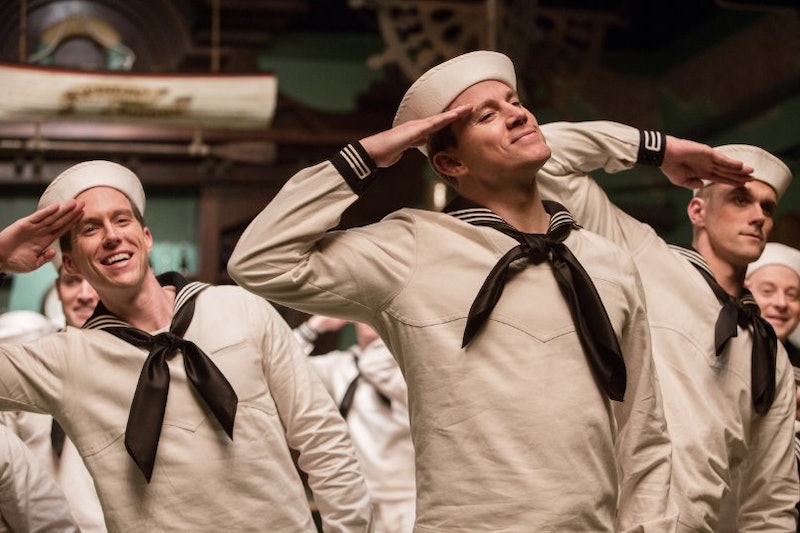 For three years — since 2013's Inside Llewyn Davis made a star of Oscar Isaac — we've been waiting for a Coen Brothers follow-up, and it's finally approaching in the form of Hail, Caesar! Brothers Joel and Ethan have been responsible for a stunning number of the major cinematic moments over the past two decades, from dark, neo-western thrillers like No Country for Old Men to screwball comedies like Burn After Reading. Rumors started swirling about their newest effort, Hail, Caesar!, when composer Carter Burwell, speaking on a panel at the Tribeca Film Festival in April 2015, revealed that the movie would feature a few song-and-dance numbers but would also be far more somber than movie-musicals set in Golden Age Hollywood might be expected to be. (Burwell wrote the score for Hail, Caesar!, as well as the songs featured in its musical numbers.) Still, early looks reveal jazz hands and choreography from Scarlett Johansson and Channing Tatum — so is Hail, Caesar! a musical?

As with all things Coen Brothers, it's not quite so straightforward. The brothers have made a name for themselves in filmmaking through their slightly irreverent approaches to classic genres — think of their True Grit as compared to the original, or Fargo as compared to a neo-noir mystery. The filmmakers wrap even their lightest material in a dour atmosphere; this fine line between humor and darkness is what sets Inside Llewyn Davis apart from straightforward, sad singer-songwriter movies like Once. So calling Hail, Caesar! a musical would be a reductive, if occasionally apt, categorization. Musicals have traditionally been relegated to the realm of comedies, especially come awards-show season — think of the Golden Globe for Best Motion Picture, Musical or Comedy. (Though this boundary, too, has become increasingly porous as evidenced in the decidedly non-musical-non-comedy The Martian's win at this year's Golden Globes.)

Though Burwell originally billed the movie as a musical comedy, he backtracked from his initial impressions while speaking on the Tribeca panel. "I wouldn't actually call it a 'musical comedy,'" he explained, according to the A.V. Club. "There are movies within the movie, and those movies might have comedic music, but the movie we're making is actually not comical. ... It's not about the music." So while Hail, Caesar! the Coen Brothers movie might be quite dark and serious, the movies it contains — various productions on a Hollywood backlot — could be anything from silly slapstick pictures to dramas-with-a-capital-D and, more likely than not, everything in between. Hail, Caesar! the Coen Brothers movie is not necessarily a musical, but it contains multitudes, after all.

Despite this disclaimer, the A.V. Club also reported that there will definitely be a tap-dance number in the water. The trailer alludes to further musical numbers: It depicts Johansson twirling and diving in a synchronized swimming routine, while Tatum gives his best On the Town effort in a sailor suit and a kick-line. The version of the preview released in October 2015 is also set to its own music — Jamie N Commons' "Rumble and Sway," according to Wired's research. The trailer's music underlines the layers of storytelling in the film, lending a darker, hustler vibe to even the humorous musical moments. Removed from their own musical context, Tatum and Johansson's musical numbers look outlandish and satirical — likely just as they're intended to.

The themes surrounding Hail, Caesar! aren't limited to this Coen Brothers film alone, which is why their movies have often defied genre. Barton Fink, one of the pair's earliest efforts, is, like Hail, Caesar!, set in Golden Age Hollywood. And, as Vox reported, "musical comedy, but not really" could also be ascribed to Inside Llewyn Davis. It's funny at moments, but it would be difficult to argue that it's a comedy in the most straightforward sense. The Coen Brothers are known for their black comedies and movies that alternate riotously funny moments with scenes of grotesque violence, often resisting categorization in the process. And categories are hairy things (just ask Ridley Scott) so while it's technically accurate that Hail, Caesar! is a musical, in that it contains musical numbers, the movie might not be so straightforward.