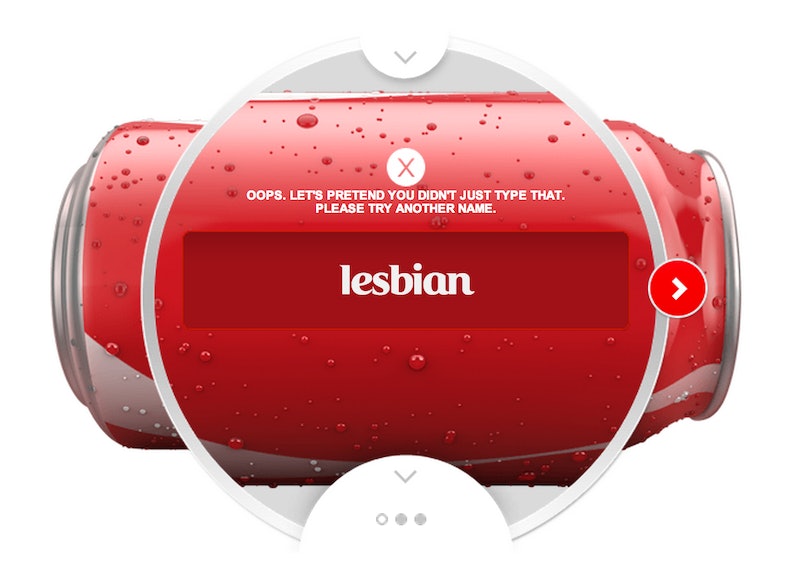 In their newest marketing ploy, Coca Cola is encouraging soda fans to "Share a Coke," by swapping out the name of their label with a personal name. However, as one Gawker reporter discovered, this silly Internet gizmo doesn't let users input the word "gay" to display on a theoretical can of Coke. Typing in the term results in "Oops, let's pretend you didn't just say that," as if gay is an "oops" word not to be uttered in polite company.

Upon further investigation, we noticed that the website doesn't allow the word lesbian either, along with some expletives we tried out — but words like hetero and straight are A-OK. Because a can of Coke that says "straight" on it would be awesome for, say, refreshments at the next meeting of the Westboro Baptist Church.

So Coca Cola, one of the world's biggest and most recognized brands, is insinuating that gay is a bad word. Covert sponsors of the 2014 Olympics in Sochi, Coke has already begun to undergo scrutiny for its underwriting of an event hosted by a country that is terribly anti-gay. Perhaps this advertising scheme is to appease Putin and other anti-gay Coke consumers? I could certainly see Putin sipping proudly from a can of "hetero" Coke.

When a company this influential is making hugely political statements, even in something as small as a frivolous social-share app on international editions of their website, it's time to question the company's values. Gay is not — I repeat NOT — a dirty word.