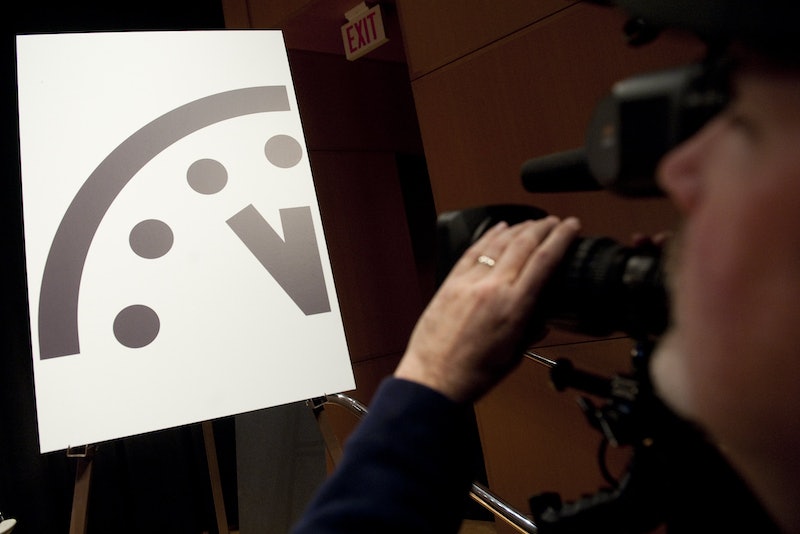 Scientists behind the infamous "doomsday clock" will reveal their perspective on the amount of time left until the apocalypse during a press conference in Washington, D.C. on Tuesday. The time currently stands at three minutes until midnight — midnight being the symbolic time of a cataclysmic event that could destroy the human race. The clock causes a stir every year when the new time is unveiled, but the group of scientists who invented the doomsday clock have been around for a long time. Update: The Doomsday Clock time was announced to be staying at three minutes to midnight.

The Doomsday Clock first debuted in 1947 on the cover of the magazine called the Bulletin of the Atomic Scientists. The publication was produced by a cohort of scientists at the University of Chicago that worked on the Manhattan Project. Many of those scientists famously had reservations about the destructive power of nuclear weapons, and the clock was an attempt to convey these concerns to the government and the public. The doomsday clock has continued since then, and is now managed by the Atomic Scientists Science and Security Board, which includes 17 Nobel laureates.

To be clear, the clock is not an actual predictor of when the apocalypse is coming. In 1947, when it was first introduced, the Bulletin of the Atomic Scientists set the clock at seven minutes to midnight, and the "time" has fluctuated up and down since then. The furthest away the prediction has ever been was 17 minutes in 1991, when the Cold War had officially ended and the Strategic Arms Reduction Treaty promised to drastically reduce the nuclear weapons arsenals of both the United States and Russia. But the countdown has been getting closer and closer to the proverbial midnight since then, rising only once, and only by one minute, in 2010.

The scientists' biggest concern has learned towards nuclear threats, which isn't especially surprising considering the group's name. North Korea's latest nuclear test could bring the countdown even closer to midnight, as well as the increasingly tense relationship between the United States and Russia. The group has also cited climate change in explanations of past time fluctuations, and the COP21 summit on climate change could have a positive influence on the Bulletin's decision. The Bulletin's website displays in-depth infographics on all the factors measured in deciding the time on the clock.

Although the doomsday clock is metaphorical, it does represent the real, self-inflicted danger to the human race and the world. The scientists' conclusion should not be taken likely, and the closer to zero the clock gets, the more international efforts should intensify to alleviate the pressing issues that the scientific community urges the world to solve.

More like this
6 Anti-Police Brutality Organizations You Can Support Right Now
By Syeda Khaula Saad and JR Thorpe
Watch Jacinda Arden’s Devastatingly Honest Resignation Speech
By Sam Ramsden
Winter Sucks, But These 42 Cozy Things on Amazon Will Make It SO Much Better
By Erica Gerald Mason
5 Striking Parallels Between Princess Diana & Prince Harry’s TV Interviews
By Catharina Cheung
Get Even More From Bustle — Sign Up For The Newsletter
From hair trends to relationship advice, our daily newsletter has everything you need to sound like a person who’s on TikTok, even if you aren’t.