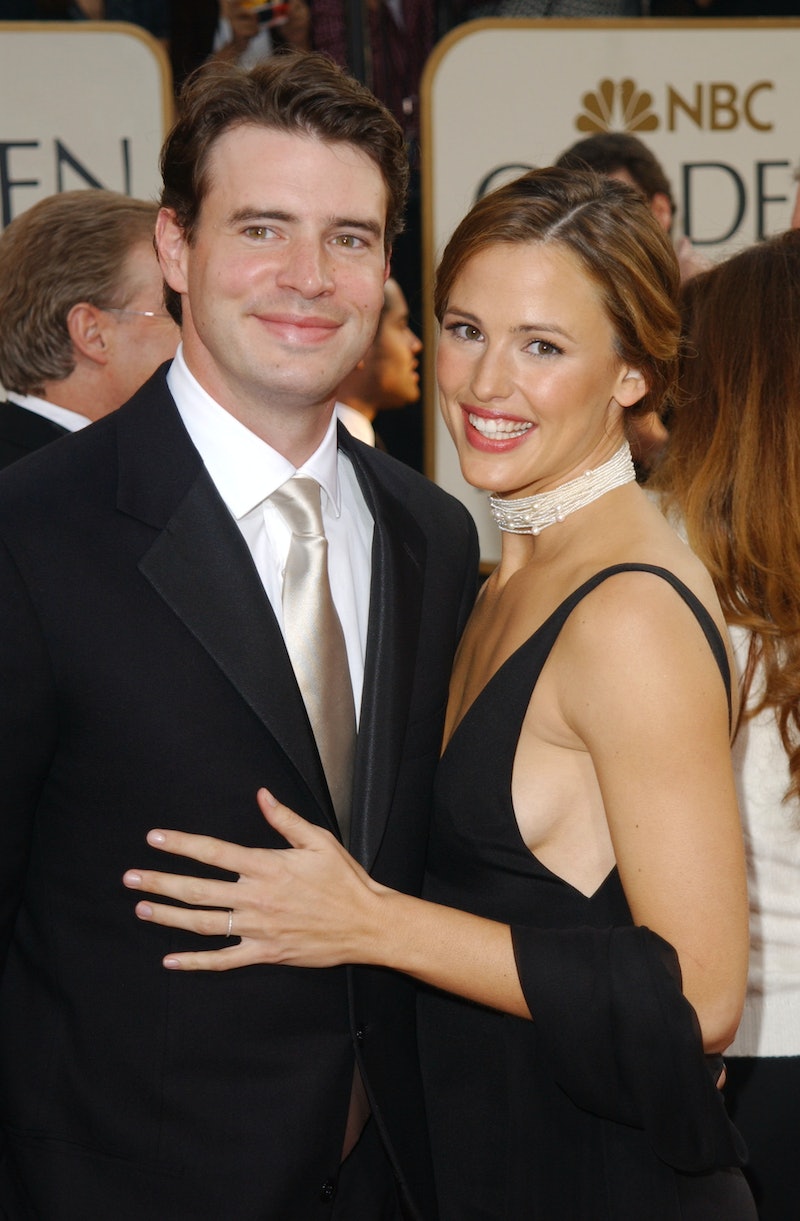 In a time where it feels like we know everything we need to know about our favorite celebrities, some of them manage to keep certain major life events (like a marriage!) hidden so far under the radar, we completely forgot they even happened. It sounds crazy, I know, but plenty of celebrities got married so early in their respective careers that the general public didn't take much notice — that is, until one or both become crazy huge stars after the marriage is over. Or perhaps both were already super famous when they tied the knot, but the marriage was over so quickly, you forgot the celebs ever even married.

Some of these pairings seem completely random, while others actually make a ton of sense, but either way, it wasn't meant to be, since all have since divorced and moved on... sometimes with other celebrities (hey, Angelina Jolie!). Mostly it's not too shocking to see famous people getting hitched to other famous people, since they naturally end up in the same circles in Hollywood through work or other projects. The shocking part really is that these marriages have somehow become so far forgotten. Here are 32 celebrities you had no idea were ever married.

The tennis star and the child actor were something of a '90s power couple, but ultimately divorced after a two-year marriage. Shields recently revealed in an interview to People that she tried to be supportive when Agassi opened up about a meth addiction, but they could not make it work. Still, she only had lovely things to say about her first husband, saying, "He is a devoted person, sweet and good but he had this demon, this affliction. But the other side, and what makes this so hard, is the way he welcomed me and my mother and anybody I loved. He is a really good human being."

The Jurassic Park star and her musician husband quietly wed in 2005 and even had two children together prior to their nuptials. They officially filed for divorce in 2010, but remained legally married until the divorce was finalized in 2013, and reportedly attempted to reconcile during that time.

He's now one of the biggest movie stars on the planet, but most fans likely never even knew Cooper was married for four months back in 2006 to fellow actor Esposito when his career was still burgeoning. Their marriage and divorce may have been swift, but the Blue Bloods star had some less-than-flattering things to say about her ex in her 2014 memoir Jennifer's Way. She said,

I should have noticed the red flags from the beginning — actually, they were more like an entire marching band squad of red flags — but I ignored them because, honestly, I didn't think the relationship was really going to go anywhere. He was funny, smart, cocky, arrogant, and a master manipulator ... We had fun, but he also had a mean, cold side. His personality could flip on a dime, but that kind of behavior was familiar to me. I'd spent plenty of time walking on eggshells in my childhood home as well as on certain sets, so I quickly learned my role in the relationship and went forward accordingly. But the relationship was about him and what he needed, and nothing else ... It wasn't all bad all the time, so I figured this was just my lot, and I took the good with the bad, even though the bad was extremely bad. Within days, my relationship hit an all-time low, and within a week, it was over. Abruptly, rudely, and with the exact callousness that I'd come to expect from him, but this time, I did nothing but agree to end it.

Clooney and Balsam were married from 1989 to 1993, and in the years after, he frequently (and famously) said marriage wasn't for him. When speaking with Barbara Walters in 1995, he had this to say: "I won't get married again because I wasn't very good at it." Turns out, even the most famous bachelors can change their tune, as Clooney went on to marry Amal Alamuddin in 2014, and the rest is history.

Oldman and Thurman were married after meeting in 1990 on the set of the film State of Grace, but the marriage was short-lived as they split after just two years together. Oldman went on to marry three more times, and she went on to marry fellow actor Ethan Hawke before they divorced seven years later.

Many back in the '80s shook their heads at this pairing. Locklear and Lee wed when they were very young (24 and 23, respectively) and many thought they were an odd match due to his hard rock ways and her sunny blonde persona. As for what she saw in him, Locklear reportedly once answered: "Tommy doesn’t worship the devil; he worships me." They split seven years later, but clearly both have a type: Lee went on to famously wed blonde actor Pamela Anderson, and Locklear later wed rock star Richie Sambora. So maybe they weren't such an odd couple after all.

Though both are huge stars in their own right now, in the late '90s, Foley and Garner were burgeoning TV actors who met on the set of the teen staple Felicity. The couple married in 2000 but were divorced by 2003, and Foley blamed Garner's rising career on the dissolution of their union, telling TV Guide, "Jennifer became a huge celebrity. She became a huge star, and she deserved everything she got. There was no other relationship, there was no infidelity, nothing. People get divorced, you know? Through no one's fault and everyone's fault." He has since married and had children with Marika Domińczyk, and she famously went on to do the same with Ben Affleck — before the two announced their divorce in the summer of 2015.

Marcil may not be a household name, but she's had her fair share of roles on big TV shows like General Hospital, NYPD Blue, Beverly Hills, 90210, and Hawaii Five-0. She was briefly married during the '80s to child star Feldman, and later went on to have a long-term relationship and a son with her 90210 costar Brian Austin Green, who later married and divorced Megan Fox. Hollywood is a very, very small world indeed.

Before she was known for being on the panel of American Idol judges alongside Randy Jackson and Simon Cowell, she was a huge pop star in her own right, so it makes sense that she'd hook up with one of the biggest '80s stars (and Brat Pack member). The couple wed in 1992 but were divorced by the end of 1994, reportedly because Abdul wanted to start a family and Estevez, who already had two children, did not.

It should come as no surprise that these two were named People 's Sexiest Couple Alive in 1993, but their romance was a whirlwind one, for sure. They were married in a quickie Vegas ceremony back in 1991 and separated in 1995. Years after their marriage ended in 2013, Crawford told Vogue UK it was simply a matter of their age difference:

I think a lot of what happened with Richard and I was that I was still 22 and at 22 — as a young woman — I was kind of still figuring out who I was and what I wanted to be and he was already 37, so in some ways, he knew that I was still growing and changing. I just didn't want to hear it from him because at 22 you think you know everything. You think you're already formed. And then you realize, 10 years later, that they were totally right.

The low-key actors were only married 17 months (and reportedly estranged for six of them) but they managed to have a pretty quiet, drama-free marriage and divorce, which is an obvious rarity in Hollywood.

This was definitely a short-lived romance for the Saved by the Bell star, as their marriage was annulled upon the return from their honeymoon back in 2004. Lopez later admitted that he not only cheated on her days before their wedding during his bachelor party (yikes!) but that he "never really loved her." Ouch.

In 2001, Barrymore was a reformed child star turned big screen darling, and Green was a zany MTV star. Their goofy, playful personalities led them to a whirlwind 9-month marriage that received plenty of media attention. Green only has wonderful things to say about his ex-wife, who has since married and had children with Will Kopelman, telling Oprah Winfrey in 2014, "I haven't talked to her in many, many years. I'm glad she's doing great. I'm really happy that she's doing good."

She's now famous for her star-turning role on Mad Men, and he for his time on Saturday Night Live and as the co-creator of Portlandia, but the two were engaged three months after meeting in 2009, and separated less than a year later. Unfortunately, Moss doesn't have kind things to say about her ex-husband. She told New York Magazine in 2014, "Looking back, I feel like I was really young, and at the time I didn't think that I was that young. It was extremely traumatic and awful and horrible."

It's honestly weird to imagine a world where she wasn't one half of Brangelina, but long before she was Brad Pitt's wife, Jolie married her costar from the oft-forgotten 1995 computer hacker thriller aptly titled Hackers in a Vegas ceremony in March of 1996. Though they were only married for three years, to this day, the two remain close friends, and in 2014 she told BuzzFeed that the movie reminds her of "Well, oddly, love. That’s where I met Jonny, who is still a great friend." Sweet!

In Hollywood, there are so many quick marriages that it's honestly so hard to keep up, which is why so many of these crazy couplings have been forgotten over time. But it sure is fun to look back and what once was, and think about what could have been!