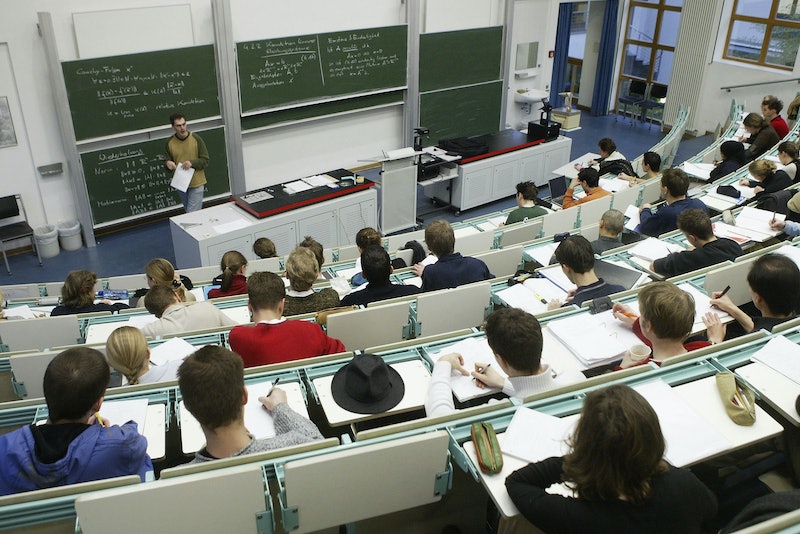 At the end of every college course you take, you'll inevitable be prompted either by your school's student management systems or by your professors themselves to fill out an evaluation of your teachers' performance in the course. You probably haven't ever thought explicitly about whether your professor's gender shapes how you evaluate them, but according to a new report, teacher evaluations are biased against women — and worse yet, those evaluations aren't actually an accurate measure of teacher compentency as a result. Uh... yikes.

The research was conducted by economist Anne Boring and published in ScienceOpen Research. For the study, the researchers ran a few statistical tests with two sets of data: One set included evaluations of 379 professors being rated by 4,423 students at a French university who were taking one of six mandatory freshman level classes over a period of five years, while the other included a much smaller set of 43 evaluations for four sections of a course taught online at a university in the United States. The United States data set was the result of a randomized, controlled, blind experiment that was originally published in 2014; in it, the male professors used women's names, and the female professors used men's names. (That's the blind part.)

Here's what I mean about the types of students: In France, the group that consistently rated the male teachers higher were the male students. In the United States, however, the students showing the stronger bias in favor of male teachers were the female ones. The U.S. data set, however, revealed something that the French one did not. Remember the blind part of the experiment? It revealed that the U.S. gender bias was apparent when the students percieved the teacher to be male — not when the teacher actually was male.

This study is definitely not the first to point out the unconscious gender biases we hold in school settings. A 2015 study of math grades, for example, found that although girls are actually more likely to score higher on math tests, teachers give higher grades to identical tests that had a boy's name on the top of the paper. Another study found that the unconscious gender biases of teachers in the early years of school can end up influencing girls' educational and career choices later in life. Teachers have also been shown to give more attention to boy students and are more likely to excuse their disruptive classroom behavior, such as interrupting or talking out of turn.

What can all of this teach us? That we need to do better. The first step to ending gender biases in education are the acknowledge that they exist in the first place, rather than making excuses for them. "Because girls are typically socialized to be quiet and passive, teachers may need to actively encourage their participation in class in order to avoid boy-dominated discussion, or a situation in which boys receive more feedback from and interaction with teachers because they more actively participate in class," notes educational resource Boundless.com. Starting to intentionally acknowledge our own gender biases is the only way we can work to end them completely, or our unconscious viewpoints will never have a chance of changing.

More like this
Iran Has Issued A Death Sentence Over Mahsa Amini Protests
By Catharina Cheung, Darshita Goyal and Maxine Harrison
Amanda Gorman Shared A Powerful Message On Meghan Markle’s Penultimate Podcast
By Darshita Goyal
Wimbledon Alters All-White Kit Rule Amid Candid Period Discussions
By Catharina Cheung and Rachel Mantock
Buckingham Palace Aide Resigns Over “Unacceptable” Comments To A Black Guest
By Shahed Ezaydi
Get Even More From Bustle — Sign Up For The Newsletter