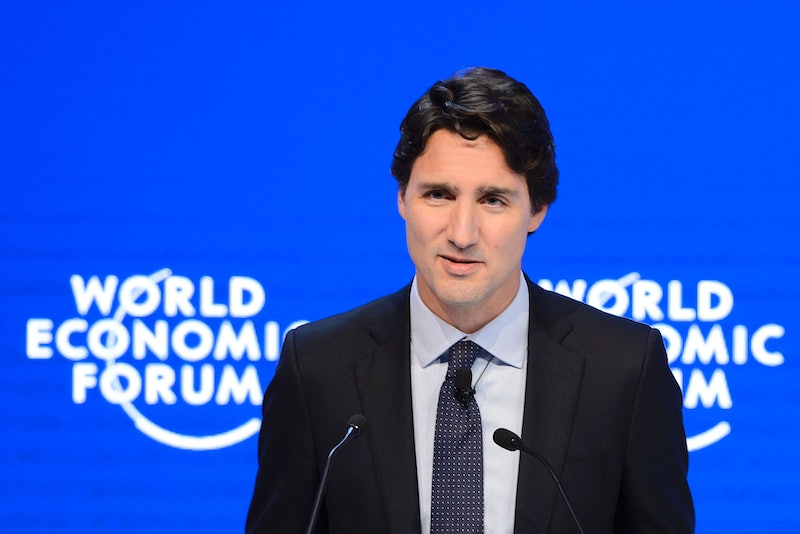 Once again, newly elected Canadian Prime Minister Justin Trudeau made headlines for his outspoken feminism this week, after reaffirming his commitment to gender equality during a speech at the World Economic Forum in Davos, Switzerland. In a speech, Trudeau noted:

I'm incredibly proud to have a partner in my wife Sophie, who is extremely committed to women and girls' issues. But she took me aside a few months ago and said "Okay, it's great that you're engaged and modeling to your daughter that you want her empowered and everything, but you need to take as much effort to talk to your sons" — my 8-year-old boy and my 2-year-old — "about how he treats women and how he's going to grow up to be a feminist just like Dad." And by the way, we shouldn't be afraid of the word "feminist." Men and women should use it to describe themselves any time they want.

Of course, this isn't Trudeau's first foray into feminist rhetoric — he's built a reputation as an ardent feminist throughout his relatively short political career. Even better, the "Trudeaumania" ignited by his good looks has brought even more international attention to his administration's work for gender equality in Canada. It's an amazing example of someone in a position of privilege and power utilizing resources to fight for underrepresented and oppressed demographics.

Trudeau's actions during his term to date have been equally as impressive as his words, and his words have been pretty great. Here are seven awesome feminist quotes from Canadian Prime Minister Justin Trudeau:

"I Am A Feminist"

This short and simple tweet says it all, and it laid the foundation for Trudeau's feminist government even before he was elected.

Trudeau was actually born while his father, Pierre, was serving as prime minister between 1968 and 1979. He credited his parents with influencing his feminism during a debate in September. "My mom raised me to be a feminist. My father raised me, he was a different generation but he raised me to respect and defend everyone's rights, and I deeply grounded my own identity in that, and I am proud to say that I am a feminist."

When asked at a press conference why he was passionate about a gender-balanced cabinet, Trudeau responded with the now-legendary line "because it's 2015." Again, short and simple, but painfully obvious to everyone who understands what feminism is really about.

Trudeau made a major announcement during a meeting with First Nations leaders back in December, promising a new investigation into the epidemic of violence against indigenous women:

Among [Minister of Indigenous and Northern Affairs Carolyn Bennett's] top priorities will be the creation of a national public inquiry into missing and murdered indigenous women and girls in Canada. ... We have made this inquiry a priority for our government because those touched by this national tragedy have waited long enough.The victims deserve justice, their families an opportunity to be heard and to heal.

In an interview with Flare Magazine before his election, Trudeau recognized the need for equal pay, on both a practical and a feminist basis:

As a father, I want to know my daughter will have the same opportunities as my sons. The Liberal Party of Canada recognizes that women's lost income potential because of the wage gap hurts Canadian families and hurts our economy. A Liberal government is committed to working with the provinces and territories to ensure that women receive equal pay for equal work.

Trudeau, who is a father of three himself, spearheaded the campaign for longer parental leave opportunities as leader of the Liberal Party. "The workplace is changed, the families have changed, and it's up to the Canadian government to catch up," said Trudeau during his campaign in August.

Prime Minister Trudeau has been outspoken about abortion rights throughout his career, and he addressed one of the biggest misconceptions about pro-choice activists in a press conference in June, saying:

Prime Minister Justin Trudeau is setting the bar pretty high for world leaders to embrace and perpetuate feminism throughout their countries, and hopefully the rest of the world can match Canada's renewed commitment to gender equality. Perhaps the sweeping feminist changes resulting from "Trudeaumania" will sweep through some other countries as well.