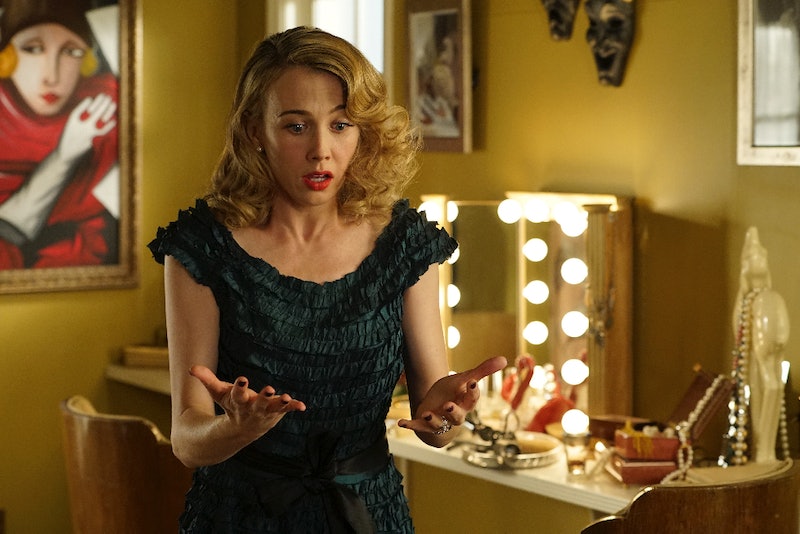 Agent Carter is no fan of sexism, so it shouldn't be too surprising that a misogynistic director got sucked up by Dark Matter when he tried to feel up Whitney Frost. Still, that doesn't make it any less horrifying. What's happening to Whitney Frost on Agent Carter ? The Isodyne Labs explosion has given her a deadly new ability.

We've seen the strain that Hollywood has had on Miss Frost before. The director makes disparaging comments about her age and looks. Plus, she's a genius inventor (like real life star and scientist Hedy Lamarr) who doesn't seem to want to be there in the first place. It looked like the Dark Matter had just given her a creepy scar on her head, but when her director discovered it — after framing the news that the studio wanted her replaced by a younger actress in a way that made him look like a hero and then trying to grope her — the situation got tense and Dark Matter leaked out of Whitney and sucked the director up.

Let me repeat that, because it was pretty bananas: Whitney Frost absorbed her piggish director with Dark Matter that just sprung out of her hand. Presumably, this is part of Whitney's transformation into Madam Masque, the Marvel comics character she is based on. In the comics, the mask is to hide a disfigurement, but I'm thinking on Agent Carter it could be used as a safety measure. Maybe some gloves too, while we're at it? She is also skilled at magic, which I presume will figure into the ABC series as Whitney gains control of her abilities. There's nothing specific about her being able to black hole people (that's a verb now), so I'm guessing that this is a raw power thing.

Additionally, I'm quite interested in her relationship with her husband. What's that dynamic? Did she really fake cry and get Calvin to send an assassin after Peggy? Is she really that paranoid? I love so much that this evil pair, Calvin and Whitney, have agendas both together and apart from one another. That's what makes a real power couple. Plus, at least she's doing better than Dr. Wilkes, who has turned part-poltergeist. This Dark Matter on Agent Carter is no joke!