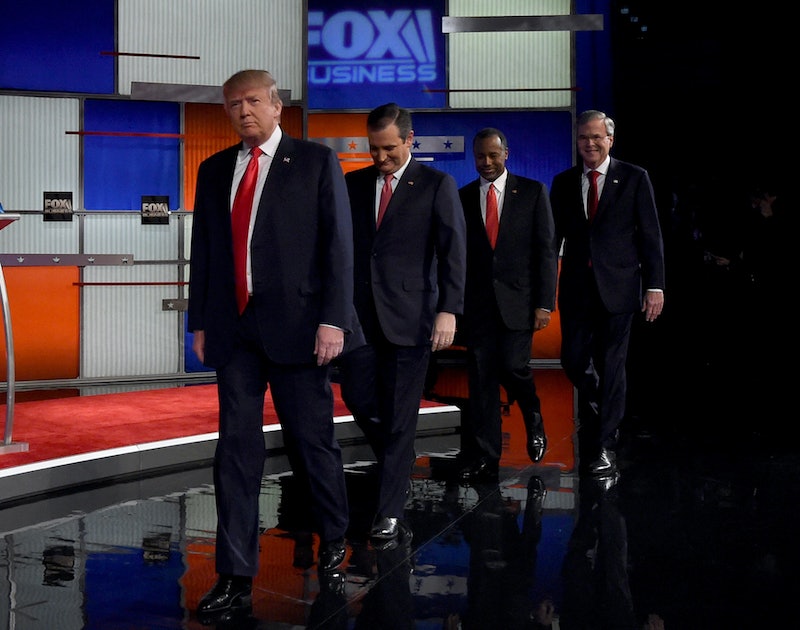 After you get over the initial shock that Donald Trump is actually boycotting Thursday's debate, you're left to ponder what that will look like. You've grown so accustomed to the billionaire's inflammatory rhetoric, unflinching egotism, and overall larger-than-life persona that it's difficult to imagine a GOP debate stage without him standing smugly in the middle. While viewership of the debate will almost certainly decline, this could be a chance for less popular candidates to finally have their moment in the spotlight. Candidates like John Kasich and Rand Paul could certainly use a night without Trump, but there is one candidate who will benefit from Trump's absence the most.

For months, Jeb Bush has tried to steal attention from Trump by incessantly attacking him, as well as other candidates for not attacking Trump. But if Trump isn't there to belittle Bush's stingers, it's possible Bush could criticize The Donald and still have time to, you know, actually talk about his own policies. Bush has put Trump at the center of his campaign, which might get him some attention (because everyone likes a good feud), but his persistent and often flawed attacks are starting to get tiresome.

The GOP elite initially thought he was their golden boy, and Bush is still drowning in money accrued through early donations and his Right to Rise super PAC. But it seems like that money is just funneling into aggressive attack ads. Labeled as "low energy" by just about everyone — including Trump — Bush has sought to change that by trying to be the bully rather than strengthening his own message.

But Thursday's debate could be Bush's chance to break free from the Trump-shaming box he put himself in. Trump's voters probably won't change their allegiance to Bush, but the Florida governor could still pull votes from a more realistic rival like Marco Rubio, who is doing twice as well as Bush in some polls, or Kasich, who still trails behind. Bush appeals to a moderate demographic, but he needs to establish himself as preferable to other candidates seeking this base like Christie and Kasich.

Unfortunately, Bush has been so focused on other candidates that he might have already lost sight of his own reasons for running, which could be easier to see at a debate without the adversary he has built Trump up to be. Nevertheless, I'm sure Bush is glad to have the opportunity to step out of Trump's shadow where he's been living since the very first debate. For the sake of democracy, let's hope he takes this chance to talk about anything but Trump.