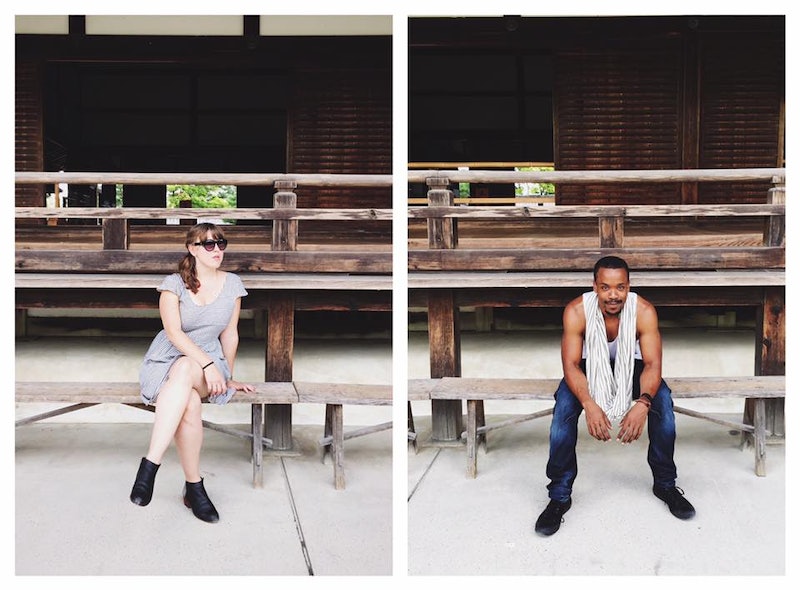 It took a long time for my boyfriend, Benjamin, and I to learn how to work from home as a couple. When we met, we were both working online from a coffee shop on the Chilean coast. He was getting his startup going; I was writing about startups and spending a lot of time wondering if I’d ever speak Spanish fluently. As we got to know each other better, he invited me to come work in his awesome high rise apartment overlooking the ocean. High speed wifi, a handsome “coworker,” and the ability to leave my computer and go to the bathroom without stressing about it being stolen??? He had me at high speed wifi.

In the three years since that Chilean coffee shop, we’ve lived in 12 apartments in seven different countries. We’ve worked in cafes, in coworking spaces, on trains and planes and buses and always, always from home. Since we’ve been working from the same space (albeit different spaces worldwide) for the entire time we’ve been together, we’ve really worked out the kinks of how to be a couple that both works from home. Now, that’s not to say it’s been a totally smooth ride. We’ve had our share of arguments and misunderstandings but, at this point, from our two bedroom apartment in Ho Chi Minh City, Vietnam, I can confidently say that we’re damn good at it.

You know how they say moving in together will either solidify your relationship or kill it right quick? Well, moving in together and both working from home is like placing an already fragile and volatile situation inside a super hot pressure cooker. What comes out of it will either be lovely and delicious or the pressure cooker will explode and you’ll end up with metaphorical body parts all over the walls. If you’re about to jump into that pressure cooker, take heed of these top fourteen tips from Benjamin and I on how to be a great couple that both works from home.

1. Pretend They’re Not In The House

In our last apartment, which only had two small rooms, Ben took the front room and I took the desk in the bedroom. I always made sure the door was closed so I couldn’t see him while I was working because I’m easily distractible and if I can see him, I inevitably think of things I want to tell him. Better to just close the door and pretend he wasn’t there at all.

Currently Benjamin and I live in a big two bedroom with a desk in the living room and he has commandeered one room as his office, while the desk is definitely mine. That’s totally fine with me — Ben needs more space than I do and I’m happy to let him have that room all to himself. We can go entire days of only seeing each other briefly until the evening, when we’ll usually make dinner together and chat about our days, just like a normal couple!

Ideally you’ll have separate rooms that you can work in, but if that’s not financially feasible then invest in a pair of sound canceling earphones and pick a seat that faces away from your partner. Seriously. As far as you’re concerned, they don’t exist during working hours.

Except for kiss breaks! One awesome advantage of both working from home is, well, you get to see the person you love! Ben can tell from my body language whether or not I’m down for a little bit of distraction, just like I can tell from his. The kitchen is also neutral grounds, where kissing is totally allowed if you find the other person there.

While you might have some romantic notion about working from your bed in your pajamas, I’m here to tell you that that’s a terrible idea. Work spaces are work spaces and living spaces are living spaces, even if they’re both in your home. If you don’t have a lot of space, something as small as a desk that’s designated — and decorated — as your work space makes a huge difference. Whatever you do, don’t work from bed and don’t both try to share the same space.

Anyone who has ever worked in a cafe with other people or a coworking space knows that headphones on is the equivalent of a hotel “DO NOT DISTURB” sign. I’ll admit that I’m not always great about following the headphones rule, but it is an important one. Even if you have some other signal — like a closed door or certain music playing — create something that’s immediately obvious so that your partner knows when you’re not up for chatting or other disruptions.

5. Be Sure To Make Time For Each Other

So, for example, Ben and I do something we call “Treat Yo Self Fridays.” We cut out of work early on Friday afternoons, buy a bunch of junk food and beer, and park ourselves on the couch to watch trashy television. It’s a seemingly small thing, but it’s a set time that we’re together, not taking calls or writing posts or messing around on Facebook.

We also make sure go out on regular dates, giving us both a time to dress up and look nice for each other because, let’s be real: Most of the time I’m in sweatpants, no make-up, and a messy bun, while he’s usually rocking undershirts. After spending so much time around each other but not focusing on each other, nothing feels better than a good conversation over delicious food, smartphone-free.

“Working from home” often means “working from coffee shops where hopefully they’re not going to kick you out for spending hours there and only buying a coffee.” While Ben and I sometimes like to go the same cafe, lately we’ve purposely been going to different cafes. It’s essential that you spend time in completely different physical locations sometimes or else you’re going to drive each other nuts, trust me.

7. Figure Out Your Working Styles — And Respect That They May Be Different

I’m the kind of person who works best with a lot of distractions — and I talk a lot. Ben, on the other hand, really likes to put his head down and work on one thing, with no distractions. As you can imagine, this led to a lot of conflict when we were first working from the same home. I’d want to chat and send him links and tell him whatever random thought had popped into my head, while he probably would have preferred to stay in a hermetically sealed room until his day was over. It takes a lot of talking — and listening and compromising — to figure out how to balance different working styles but I’m here to tell you that it’s totally doable.

8. Have Your Own Tools

As in, don’t expect that you’ll be able to split time on the family desk top. Nothing is more frustrating than trying to get your work done, only to realize that the tools you need to do it aren’t available because whatever you’re partner has on today is way more pressing. Make sure you have your own computer, charger cables, phones, etc., or else accept that you’re probably going to break up soon. No joke.

Because Ben’s working style is more focused than mine, I’ve asked him about how he’d like me to “talk” to him if I need something during the day. He’s told me that if it’s immediate, then don’t hesitate to knock on the door or override the headphone rule. However, if it’s something that I don’t really need to know until later, I message him about it on Facebook. I know that he checks those messages at regular intervals throughout the day, at times when he can take a break, and that he’ll get back to me when he can. That way, we both get what we need.

10. Let Them Know Ahead Of Time About Distractions

There are probably parts of your day that are going to be distracting to your partner, and vice versa. For example, I do a lot of interviews over video chat and I need to record them, which means I can’t use headphones. If I know I have a call like that coming up, I just tell Ben ahead of time so that he knows that our shared space is going to be dominated by my call for a while. That gives him the opportunity to plan on working in another space during that time and also ensures that he doesn’t schedule a call at the same time, which would overload our wifi.

Like most couples, we have a lot of friends in common. However, unlike most couples, we have to actively spend time apart. Sometimes I’ll head out with friends on my own and sometimes Ben will too. Sometimes Ben even takes vacations on his own, like the time he took off for a few days to Mexico City when we were living in Guatemala. Those times apart are not only essential for maintaining a sense of self when you spend so much time together but also have the added bonus of flicking the “absence makes the heart grow fonder” switch in your brain.

Coworking spaces are awesome when you work from home. They’re a great way to get the social aspects of an office without the bullshit of office politics or, you know, a boss. They’re also great for couples who work from home, as they give you a space away from the house to get stuff done. Most major cities (and even some smaller ones!) have coworking spaces these days so get thee to Google and do some research! And, if you're feeling especially adventurous, there are amazing ones around the world you can check out, like Hubud in Bali, which you can see in this picture.

13. Take Responsibility For Your Needs

I know that if I spend too much time in the house, I start to go stir crazy. Ben knows that if he spends too much time around other people — me included — he starts to go crazy. Instead of letting ourselves get to that point and taking it out on each other, I make sure to meet up with friends and go to cafes regularly and he makes sure to go take walks on his own. It seems small, but being conscious of your own needs and taking care of them yourself instead of relying on your partner to take care of them for you is definitely a key factor for happy work from home coupledom.

14. Encourage Each Other To Stop Procrastinating — And To Take A Break When Needed

A few Fridays ago I was feeling pretty burnt out and just didn’t want to work. Unfortunately, I had tasks that absolutely had to be completed that day but instead of completing them I was moaning about not wanting to work and playing around on Facebook. Ben — who had written 5,000 words before noon that day — sat in front of me slurping a beer from a wine glass while telling me to suck it up and finish the small amount of work I had left. While I definitely wanted to tip that beer into face, his method also worked and I got my work done, earning my own frosty cold brew in a wine glass.

Conversely, Ben has a bad habit of working too much. (A problem that most freelancers and self-employed people have, when we’re being honest.) I know when he’s pushing himself too hard and, when that happens, I tell him he needs to take a break. He does the same for me and that’s how we manage to find that ever-elusive work/life balance, even when work and home are so inextricably intertwined.