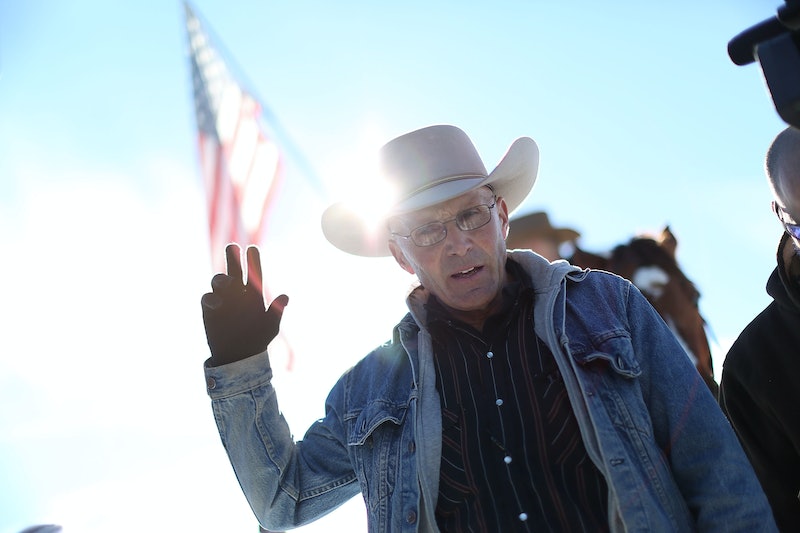 On Tuesday, the standoff between police and the Oregon "militia" that's occupied a federal wildlife reserve for weeks resulted in eight arrests and the death of Robert "LaVoy" Finicum. According to The Oregonian, the group was pulled over on their way to a community meeting in John Day and officials said Finicum, 55, didn't obey orders to surrender. Twitter's reaction to Finicum's death highlights the country's mixed feelings on the anti-government "militia" controversy and how different the conversation would likely be if the protestor weren't a white man.

It's unclear who fired shots first, but the Bundy family — major players in the "militia" — claimed Finicum was unarmed and had his hands in the air when he was fatally shot, but Brian Ries of Mashable reported that the car's driver said Finicum fled police and charged the road block. Claims that he didn't have a weapon sparked comparisons between Finicum, the group's spokesman, and unarmed black men killed by law enforcement at alarming rates, with some Twitter users joking that the police must have thought the protestor was black.

The men have occupied the Malheur National Wildlife Refuge outside Burns, Oregon for 26 days, and the authorities and the rest of the nation are waiting to see if Finicum's death and the arrests of his fellow protestors will end the standoff or if the group will want retribution. "It appears that America was fired upon by our government and one of liberty's finest patriots is fallen," the Bundy Ranch wrote on Facebook. "He will not go silent into eternity."

Here's a look at how Twitter responded to Finicum's death, with his anti-government sentiments and race at the forefront of people's minds:

On Making Him A Martyr

On Thinking He Was Black

On A Drug Test

On Living Under A Tarp

On The Slow Police Action

On Fighting For You

On Not Being Heroes

On Another Ferguson Or Baltimore

Finicum's death and the controversy as a whole brought up strong feelings for many, but people's reactions were all over the board, with some mourning the death of a patriot and others saying a black "militia" would have experienced police violence much sooner.