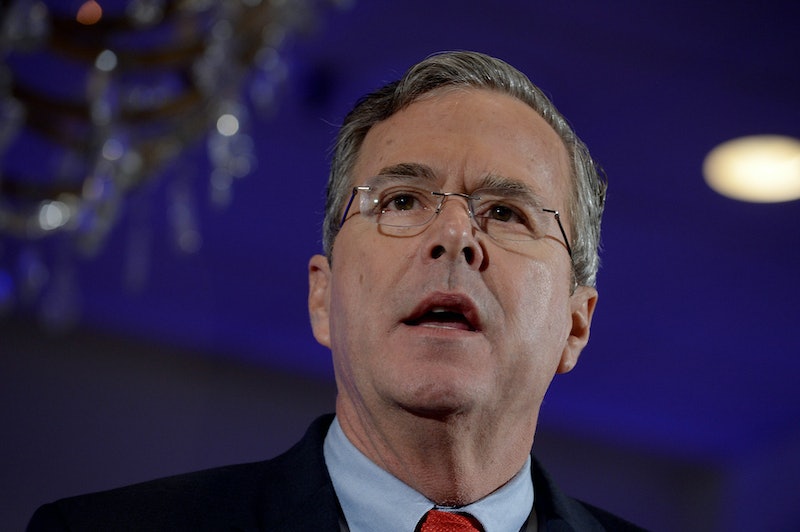 The husband of Floridian Terri Schiavo described a new television a from a Jeb Bush super PAC as "disgusting" and "disgraceful." Schiavo was on life support in the 1990s and 2000s while a court case played out between her husband and her parents on whether or not to continue those measures. The ad includes a brief image of her while inciting Bush's credibility as a social conservative, or as the narrator puts it, “a man of deep faith, who fought time and again for the right to life.”

The ad was created by Right to Rise, a super PAC supporting Bush, and is running on TV stations in South Carolina. BuzzFeed News broke the story, speaking with Terri's husband Michael Schiavo. "It is simply disgusting that Jeb Bush and his super PAC would exploit my wife’s tragedy for his crude political gain,” Michael Schiavo told BuzzFeed. “Shame on Jeb Bush.”

The ad doesn't begin with Schiavo and the "right to life." It starts with his "A+" NRA rating, then shifts to religion showing the image of Schiavo. Then it moves on to his plan to fight ISIS, strengthen the borders, and fix the national budget. It ends, "Jeb Bush, he's the conservative you can trust to fight for our beliefs."

Michael Schiavo told Politico, "It sounds like it’s a last-ditch effort to get the right-wing constituents." His wife's feeding tube was pulled in March 2005 after the years-long court fight. Michael had found her unresponsive and lacking a pulse some 15 years earlier in their St. Petersburg, Florida, home.

Bush interjected himself into the situation after Schiavo's parents tried to keep her alive, claiming she was conscious. Then the governor of Florida, Bush filed a federal court brief, signed legislation, and issued an executive order in an attempt to keep her alive. In a 2015 interview with Politico, Michael Schiavo said he blamed Bush for the prolonged suffering he went through. "It was a living hell,” he told Politico, “and I blame him.”

After the advertisement was aired, Michael Schiavo released a longer statement on the matter:

Using his disgraceful intervention in our family’s private trauma to advance his political career shows that he has learned nothing. He’s proud of the fact that he used the machinery of government to keep a person alive through extraordinary artificial means — contrary to the orders of the court that were based on the court's determination, made over six years of litigation, that doing so would be against her wishes.

The "right to life" question is not usually a point of contention at GOP debates, but given Schiavo's comments on Bush, this case could be brought up at the Thursday debate, shedding some light on where the other candidates stand.