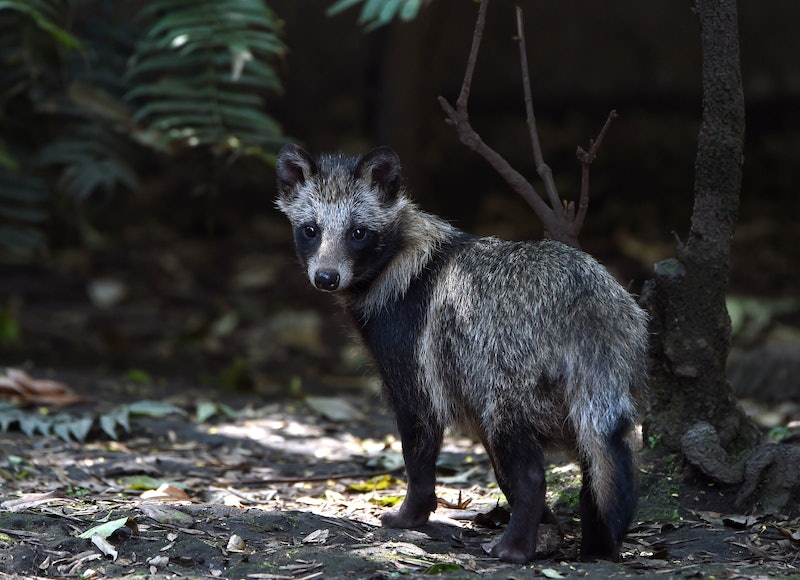 Thanks to the power of social media, there's a new viral hit on the block — the tanuki just shot to fame (and/or public obsession) after the Twittersphere stumbled across pictures of the creature. What is a tanuki, you ask? Be forewarned, my friends. The following article is teeming with cuteness and may lead to involuntary cooing.

A distinct canid species native to Japan and other East Asian countries, the tanuki resembles a raccoon — thus its other common moniker, "raccoon dog." According to the International Union for Conservation of Nature and Natural Resources (IUCN), the tanuki population is stable and now widespread in northern and eastern Europe as well. One of only two currently living members of the monotypic basal canid species (the other being the bat-eared fox), tanukis have a morphology more reminiscent of ancestral forms of dogs than of present-day dogs. They are known by the scientific name Nyctereutes procyonoides viverrinus.

Despite their masked eyes and bushy tails, tanukis are not closely related to the raccoon. Actually, the Tanuki's body is more similar to a fox's — although its markings are still undeniably raccoon-like. Adults weigh in around 10 to 20 pounds and measure roughly 20 inches long. They have thick coats and short, rounded ears.

Behaviorally, the tanuki is not unlike many other canids, with a few exceptional caveats. The tanuki is the only canid to hibernate during the cold winter months. It is also one of only two canids capable of climbing trees — the other is the gray fox. They are omnivores, who have been known to swim or dive for their food in addition to foraging. Tanukis don't actually bark, like a modern-day dog, but they have a spectrum of responsive sounds such as mewing, whining, whimpering, and growling.

But enough of the technical talk! Bring on the stuff that'll make you want to hug and squeeze these adorable little guys, right? For starters, family is very important for these sweet creatures. Like many canids, tanukis prefer to form packs. However, tanukis' packs typically consists of either small, close-knit groups or a single pair. This is because the tanuki often couple up into monogamous pairs. The male tanuki not only sticks around after the female has pups, but it actually takes an active and loving role in helping to parent the pups and care for the mother. Say it with me: Aww!

As if that wasn't charming enough, the tanuki has a long and storied history in Japanese culture. Since ancient times, the tanuki has been a mainstay in folklore, with the mythical creature being known as bake-danuki , or "monster raccoon dog." Once considered malevolent like the Japanese spirit monsters known as yokai, these mystical, shapeshifting spirits now boast a reputation for being mischievous and jovial — and having comically large scrota. Yep, you read that right. So large, in fact, they are often depicted in caricatures as tossing their scrota over their shoulders like luggage. This extreme exaggeration is thought to have developed during the Kamakura era, but the reality is wild tanuki really do have disproportionately large testicles.

More like this
Starbucks' Summer Menu Includes A New Chocolate Cream Cold Brew
By Emma Garza
How To Fight For Reproductive Rights, Based On How Much Time You Have
By Courtney Young
TikTok Is Using A ‘Love Island’ Sound To Expose Their Weird Crushes
By Courtney Young
What Is “Night Luxe?” Breaking Down TikTok’s New Aesthetic
By Courtney Young
Get Even More From Bustle — Sign Up For The Newsletter