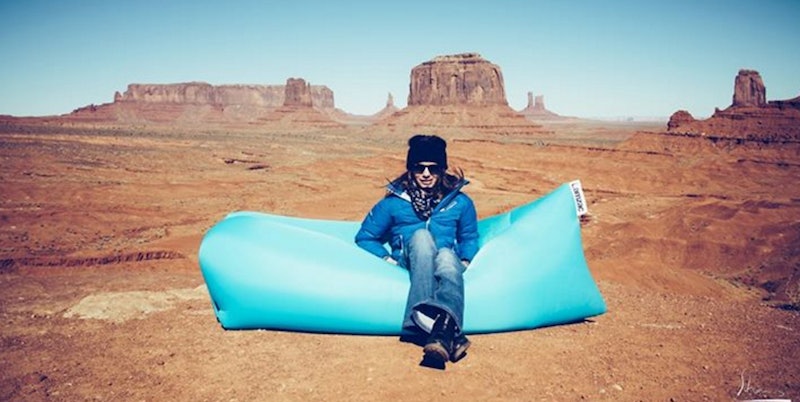 You may think you know every lazy person hack in the book, and you're probably not wrong. But every once in a while, an invention such as this portable inflatable couch surfaces, and we are all forced to realize that there are so many amazing ways we can lounge around and do, uh, nothing — so why limit ourselves at all? (#DreamBig). This glorious invention is called the LamZac Hangout, and it is the lounge-iest lounge couch ever to exist. When compressed, it fits into a little pouch and weights only about two pounds (even tiny laptops weigh more than that). When it's inflated, it's about six and a half feet long and three feet wide, which means it can comfortably fit one person laying down, and at least two or three people sitting up.

LamZac is a Netherlands-based company, which is responsible for the Hangout. It costs about $70 (+$16 shipping) but it's a sofa that inflates automatically... so depending on your lifestyle, it very well may be worth the price. The company's name was inspired by the Dutch word lamzak, which means "a lazy person or literally, an inactive bag," which is perhaps the best part of all of this.

According to the company, the LamZac is the brainchild of Marijn Oomen, who first presented the idea on the Dutch TV show "Best Idea of Holland" in 2010. After losing in the finals, Marijn decided to take matters into his own hands: he started his own company, and began manufacturing his invention for the public. The concept first came to Marijn on April 4, 2010, while he was at a part with friends in the Dutch town of Meppel. It was a long night of partying and he had too little sleep, and there wasn't time to deflate and pack the air mattresses. The company website explains:

During this process Marijn Oomen the inventor of the Lamzac observed that the mattresses were very quick to deflate while the previous night considerable effort had been expended to fill them with air. This led to a quest to be able to fill an air mattress with air as easily as it is to empty them of air. The first insight Marijn had was that you could use the air in one air mattress to fill another air mattress. This then spawned an idea, what if you could catch air in a bag and then by sitting on it push the air from the bag into an air mattress?

Little did he know, it was about to be a great success! After selling many "normal" versions of the product, he created a new and improved version, which is what you see today: the LamZac Hangout. This version is lightweight but strong, and the durable fabric ensures that you'll be able to keep it for a long time. The packaging allows you to take it anywhere — beach trips, the park, vacations, your backyard — so you can always keep it on hand for whenever you want to kick back, relax and enjoy the great outdoors.

More like this
The 11 Best Sheets For Night Sweats
By Megan Gray
The 6 Best Closet Dehumidifiers On Amazon
By Sharon Brandwein
Is The Stanley Adventure Quencher Worth The Hype?
By Alexis Morillo
6 Storage Hacks To Eliminate Clutter, According To Experts
By Allie Volpe
Get Even More From Bustle — Sign Up For The Newsletter