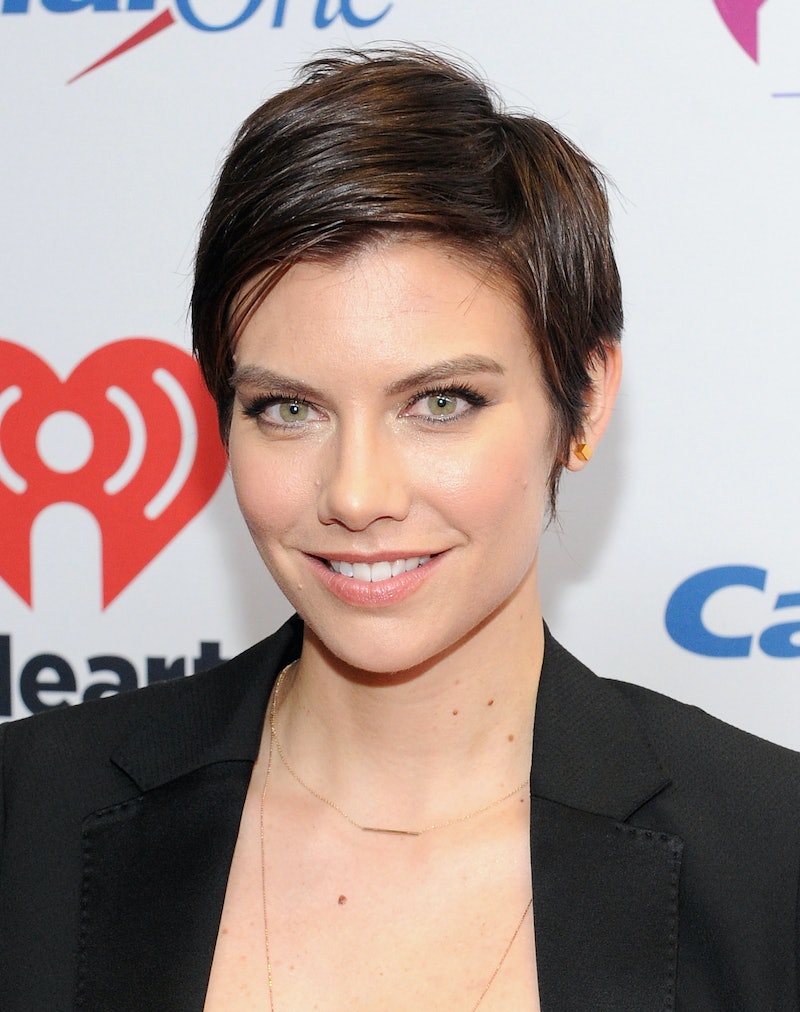 When you're considerably deep into a fandom, you start perpetuating some irrational fears. It's understandable — I do it, too. You're invested and you've studied the show well enough that you know when something seems awry. Which, as Uproxx points out, is why Lauren Cohan's haircut has been making The Walking Dead fans think that her character Maggie is going to die on the show. But, will Maggie actually die on The Walking Dead? Eh, one haircut does not a dead woman make... or does it?

In a recent interview on Jimmy Kimmel Live!, host Jimmy Kimmel referenced the speculation over the haircut in an interview with Cohan, and highlighted the fact that it became, "a news item." But, he was also curious if the haircut had "anything to do" with the show. She explained:

It’s so funny, you know how it is with the show, we keep it top secret. But the fun thing is you’ll either find out, or you won’t find out. Or it was on the show, or it wasn’t on the show. But we will find out one way or the other.

Which, yeah, was just an excellent deflection in the guise of an answer.

Listen, I am not going to pretend to be a TV show clairvoyant. So, I don't always understand the decisions shows — even The Walking Dead — make to kill off beloved characters. Like, for instance, Maggie's very own sister, Beth, or their father Hershel. (Speaking of Beth, do we think that they'd kill off the last of the Greene line now that both Beth and Hershel are gone?) It might make sense in the long run, but at the time, the burning pain of losing someone we've grown to love in a show we've grown to love is a difficult pill to swallow.

Also, Cohan herself isn't making it seem like she's leaving any time soon. In a January interview with Celebuzz, Cohan exclaimed that she was, "really excited for Maggie and Glenn to have a baby Magglenn." But, in order to have, "Baby Magglenn" that would mean that Maggie would have to live through the pregnancy in order to produce the baby with a hybrid couple name. And, as Cinema Blend points out, unlike Lori, her character would have to be alive afterwards to enjoy the baby at all.

That said, there could be a perfectly good explanation for her getting a new haircut. Maybe she stumbled into the last functioning hair salon in America. Maybe Carl found a hairstyling magazine and has been studying up on how to cut hair. Maybe Maggie's hair gets caught on something and they have to hack it off and it just ends up turning out perfectly like Mulan's sword haircut. Maybe she just wants a change.

Look, I can't guarantee Maggie's safety on the show indefinitely — but, it seems as though right now she is probably not going to die, haircut or not.

More like this
Everything To Know About 'Grey's Anatomy' Season 19
By Brad Witter
Britney Spears Met The Weeknd & Sam Levinson, So She May Actually Be On 'The Idol'
By Jake Viswanath
Here’s Everything Coming To & Leaving Netflix In June
By Alyssa Lapid
Kaley Cuoco & Tom Pelphrey Just Made Their First Public Appearance As A Couple
By Hugh McIntyre
Get Even More From Bustle — Sign Up For The Newsletter