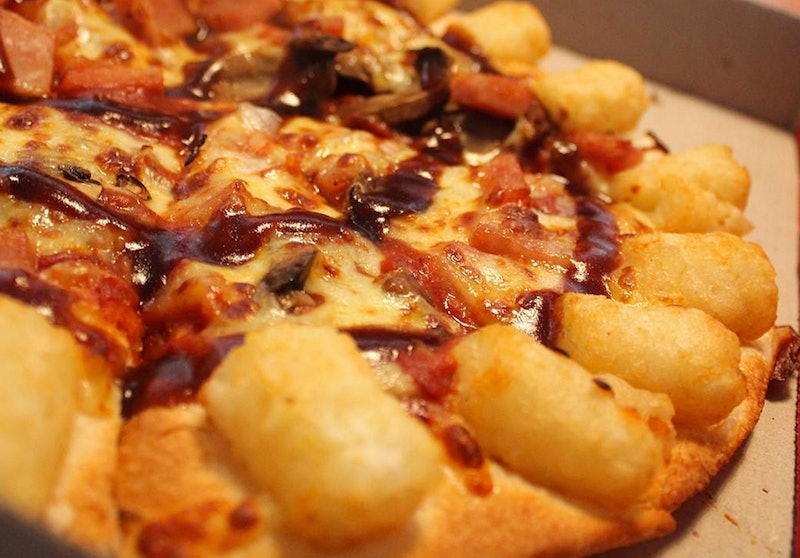 My two favorite cafeteria foods have finally come together in the latest crazy fast-food mashup: the Pizza Hut tater tot crust. And while part of me is thinking "Finally!!" the other part can't help but wonder, "Why????" It's hard to be sure if this is a freakin' food miracle or a Frankensteinian monster that was never meant to be. The New Zealand exclusive pie is called the "hash bites crust pizza." And while probably somewhat appetizing, could it possibly be worth 18 plus hours on an airplane to get myself to it?

The tater tots are baked into the crust, creating a glistening golden brown halo around the cheesy center. According to Food Beast, New Zealanders have the option of paying an additional charge of $3 New Zealand (or $1.95 US) to tot-up their crust. They also have the ability to order said tots as a side dish (I want). Pizza Hut has experienced some backlash for their flippant carbs-on-carbs approach to crust ingenuity, to which I say: don't be a hater of the tater.

Sadly, this promotional pizza seemed to disappear as quickly as it was announced. It was clearly too good for us mere mortals. And though it is gone, it is certainly not forgotten.

New Zealand Pizza Huts have attempted to fill the vast void that Hash Crust 2016 left by replacing it with a cheeseburger crust. I do not know how anyone can maintain a modicum of composure while trying to eat a slice with their hands.

But US-residents are not completely left out of the fun. For a limited-time (of course), the new cheese-stuffed garlic knot crust is available for $12.99. Billed as an appetizer and a pizza all in one, it comes with extra marinara dipping sauce. The new pie had its live-streamed debut on Monday. Sigh, I guess it will have to do for now. Pizza Hut has been a leading power in the novelty food approach since bringing the world stuffed crust pizza in 1995. Since then, they have filled their crusts indiscriminately with everything from hotdogs, to marmite, to bacon bites, and cream cheese. Even this creation graced tables in Hong Kong.

It seems every fast-food retailer is competing to come up with the craziest concoction. KFC's Double Down sandwich replaced its bread with fried chicken, and Taco Bell famously subbed out their shell for giant Doritos. People want to try these products because they are too ridiculous/glorious to believe, and you can bet your bottom dollar they will order it for its sheer novelty or ironic appeal.

So what could be next on Pizza Hut's mashup agenda? An eggplant parm crust? A pulled pork BBQ crust (please)?

Since tater tots are what I assume pure joy is made out of, I do hope the company reconsiders its future distribution.