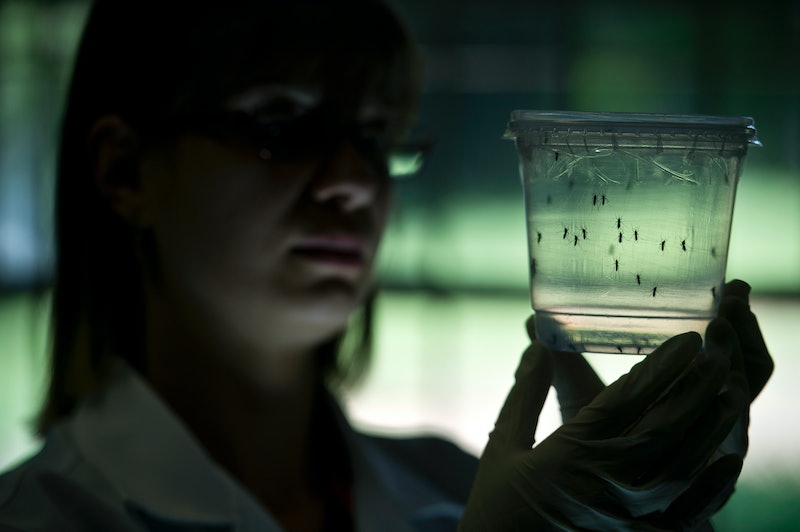 On Tuesday, the Centers for Disease Control and Prevention (CDC) issued a travel alert to Americans for 24 countries and territories, mostly in South and Central America, that have experienced outbreaks of the Zika virus. The alert advises women who are pregnant to postpone travel to affected locations. There is much we don't know about it, but there are some important facts about the Zika virus we should become familiar with.

A couple things we don’t yet know: what the likelihood of an outbreak of the virus in the United States is, and, if there is an outbreak, how widespread it will be. The BBC reported on Wednesday that the World Health Organization believes the Zika virus is likely to impact the United States and Canada, and that President Obama has called for research into vaccines and treatment to be sped up. While researchers gain more insight into the virus, there are several questions we can answer now, including: Where are the current outbreaks? What symptoms are associated with the Zika virus? Are there any serious risks? How is it transmitted? And what can you do to avoid becoming infected? This information will help you get your bearings on Zika.

There Have Been Cases Confirmed in United States

While the vast majority of confirmed cases are south of the border, more than a dozen cases of Zika infection have been confirmed in the United States. Each American with the virus is believed to have been infected while out of the country, according to Washington Post reporters Lena H. Sun and Brady Dennis.

The Majority Of Cases Are Mild Symptoms

In most cases, the infection does not cause severe health consequences. The CDC reports that some people who are infected have no symptoms whatsoever. For those who do, they usually experience fever, joint pain, rash, and red eyes. Symptoms typically last for a few days to a week.

The main concern with the virus is the risk it poses to fetuses, particularly during the first and second trimesters of gestation, according to the CDC. The babies of women who were infected with the virus have a higher rate of a condition called microcephaly, characterized by an undersized head and brain. The CDC reports that microcephaly can cause several physical and cognitive issues, including seizures, developmental delays, vision or hearing loss, and intellectual disabilities.

And Possibly A Rare Neurological Complication

Another concerning potential aftereffect of Zika infection, Gillian Mohney of ABCNews reports, is a rare condition called Guillain-Barre syndrome, which can cause paralysis. The syndrome occurs in some people after they have suffered a viral infection, when the immune system malfunctions and attacks the nervous system. Mohney noted that Guillain-Barre can be treated by plasma infusions, but that paralysis may persist for weeks.

It Is Transmitted By Mosquitoes

The Zika virus is transmitted by mosquitoes, and is therefore more prevalent in warm, moist climates like that of Central and South America. Of course, as the United States moves into spring and summer, certain parts of the country will experience weather that is hospitable to mosquitoes. A specific type of the insect called the Aeges aegypti is known to be the primary transmitter of the virus, although researchers have identified the Aedes albopictus as potential carriers as well, The Washington Post reported.

Some Areas Of The United States Might See An Outbreak

What does it mean for the United States? A potential outbreak could occur in the United States where the Aeges aegypti mosquito is found — mostly along the southern border states. If the other possible carrier — the Aedes albopictus — ends up transmitting Zika, then we're at risk for a more widespread area in which the virus can be acquired, since there is a dense population of this type in most of the Eastern part of the United States, with the exception of the upper northeastern states, The Washington Post reports.

There's No Treatment Yet

There is currently no vaccination against Zika, and there is no treatment for it. Prevention is the main protocol — not traveling to areas with outbreaks and avoiding sexual contact with infected individuals (a rare way in which the virus reportedly may be transmitted).

Experts aren't on the same page about how much of a threat Zika poses to the United States. Peter Hotez, dean of the National School of Tropical Medicine at Baylor College of Medicine, told The Washington Post, “I think we’re in for real trouble in the United States.” Hotez told the reporters he was confident that the Ebola virus would not be an issue for the United States a couple years back, which turned out to be untrue.

But Dr. Beth Bell, director of the National Center for Emerging and Zoonotic Infectious Diseases at the CDC, told NPR, "we don't think that widespread transmission in the United States is likely." Referring to the facts that many people in the country keep windows closed during the summer since they use air conditioners, that we tend to have screens on our windows, and that many counties spray for mosquitoes, she said: "These are all conditions that make it less likely for ongoing, large-scale spread to occur."

For our part, the most we can do while researchers continue to study the virus is to keep informed and follow the CDC's advice.

More like this
How To Fight For Reproductive Rights, Based On How Much Time You Have
By Courtney Young
Michigan’s Governor Is “Going To Fight Like Hell” To Protect Abortion Access
By Andrea Zelinski
23 Abortion Funds In States With Trigger Bans To Donate To
By Emma Carey
President Zelensky Spoke Out On Ukraine's Chances Of Hosting Eurovision Next Year
By Sam Ramsden
Get Even More From Bustle — Sign Up For The Newsletter