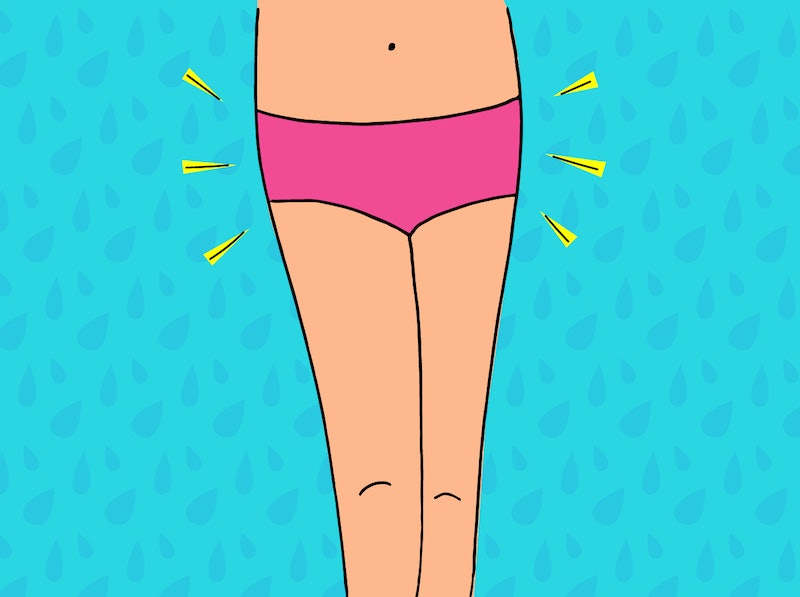 The only kind of woman who would wear a fresh pair of underwear every single day of their lives is the perfect kind. Let's assume, for the sake of this conversation, that none of us are boring enough to fall into that category. That means we're all guilty at some point of wearing the same pair of panties a couple days in a row, and that it's nothing to be embarrassed about.

It's not for a lack of options, though. According to a 2012 study, the average woman owns about 34 pairs of undies, compared to the 12 they had in 1999. I personally think we're overshooting it with that number, but hey, what do I know? I go commando half the time. Even if you do own that many undergarments, chances are you've run out of clean ones before, whether you were overseas or you just forgot to do your laundry for a long time.

All you lazy folk out there will be glad to know that it's actually not that bad to keep the same underwear on for a couple days in a row. J. Scott Kasteler, an Associate Clinical Professor of Medicine at the University of Louisville, told Greatist that as long as they aren't visibly dirty — as in, marked with urine or other discharge — you can technically rock 'em out for a while.

However, tread carefully, because the second something is off, you're at risk for an infection or, at the very least, irritation. Here are five things that can happen to your body when you don't change those panties often enough.

1. Your Skin Will Get Itchy

This is generally the first thing that happens on any part of the body that isn't lucky enough to be covered with clean clothes, but it can be particularly annoying when it happens around your lady parts. Unwashed panties can irritate the skin, making you want to scratch like a crazy person at all hours of the day.

It happens because of the bacterial buildup in the fabric of the underwear, which transfers to your sensitive skin down there. While this particular side effect isn't something to be very worried about, if you don't do something about it, that irritation could result in something more serious than having to scratch yourself incognito.

2. You Could Develop Sores Or Rashes

First comes the itchiness, and then comes the sore or rash. Because the panties have been out and about for so long, the not-so-clean material will chafe your skin. When ignored, it can lead to visible protrusions or redness, neither of which are pleasant to deal with. They're treatable, so don't worry, but you probably don't want to subject yourself to the trouble in the first place.

This means the bacteria on your undies are starting to work their butts off, and they won't be going anywhere unless you kick them out. A common type of rash you might see as a result is a heat rash. It's extremely uncomfortable and itchy, and it can lead to something more lasting if you don't get it looked at by a medical professional — and change into a fresh pair of panties.

3. Your Vagina Will Start To Smell Different

Yep, you've got scents coming from your lady parts, and normally there's nothing weird about that. However, there are some smells that are trying to send you a message. Listen to your vag. Your nostrils may encounter something musty or otherwise different down under due to the lack of fresh air your vagina is getting from the days-old panties. That jade garden of yours needs plenty of oxygen; the longer you wear the same underwear, the less it gets, meaning the more likely it is for odd scents to accumulate.

4. You Could Get A Yeast Infection

This is especially likely to happen if you have sweat in the panties you've been sitting in for a few days. Underwear that's been perspired in needs to be changed on a regular basis, similarly to how you can't sit around in a wet bathing suit for too long. Yeast and bacteria thrive in moist environments, so don't give them the chance to multiply into an obnoxious infection.

If you're the kind of woman who prefers non-cotton underwear but don't change it that often, you're at an even higher risk of getting an infection. Underwear made of nylon and lace (even if it has a cotton crotch) trap heat more than cotton does, so recycling those over and over again won't make your vag very happy. The yeast will subsequently grow like crazy, and eventually force you to pay your OBGYN a visit.

If you've never had a UTI, you're a lucky woman. These infections occur when bacteria crawl their way up into the urinary tract, and that can happen in many different ways. For example, if you've had the same panties on for a while, there's a chance that particles of feces have settled into the fabric. If those germs mosey their way around to the wrong home, you'll be slammed with a UTI and have to visit your doctor.

Changing your undies often and washing them in hot water will kill those mean bacteria and prevent infections from happening to your innocent, lovely vagina. So rock all 34 pairs by changing them often — you might as well.