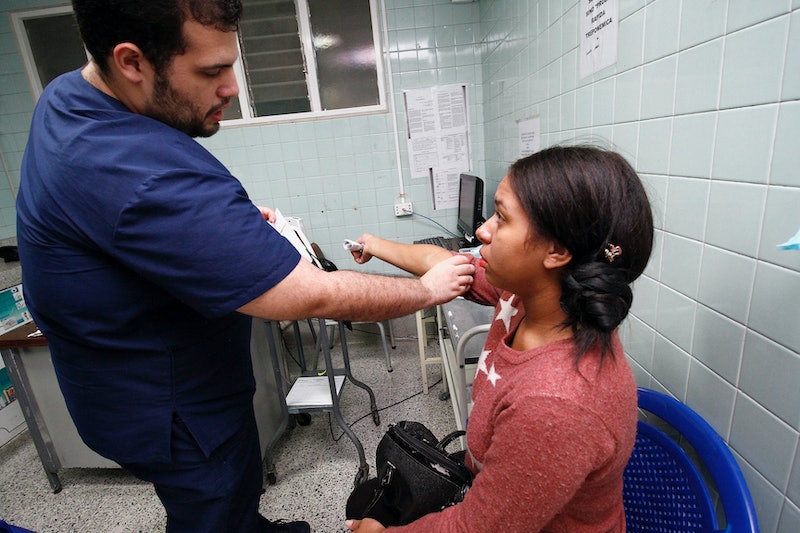 A virus once thought to be fairly harmless is making headlines for its ongoing spread as well as the threat it poses to pregnant women and their unborn children. The Zika virus is causing global concern and appears to be spreading from South America, where countries like Brazil and Colombia are feeling its worst effects, toward North America. Very few cases of Zika virus have been reported in the United States, but that number appears to be increasing. Six more cases have been confirmed cumulatively in Arkansas, New York, and Virginia — all of which have reportedly been contracted outside of the county. The emerging prevalence of the mosquito-borne illness has caused many to wonder, is there a Zika virus test?

According to the Centers for Disease Control, there is no commercially available test to determine whether or not you have Zika virus. There is, however, an option for those who suspect they've been infected to submit samples to the CDC directly for testing at their Arbovirus Diagnostic Laboratory as well as various state health departments. A blood or tissue sample may determine a Zika virus diagnosis and results are typically available from between four days to two weeks after a sample has been received and a receipt has been issued. The CDC warns that results may take longer to receive during busier months.

The test used to diagnose Zika virus is known as a reverse transcriptase-polymerase chain reaction or RT-PCR. It's considered one of the most advanced and sensitive ways to detect information on mRNA and involves separating the RNA to construct a complementary DNA strand as a means to detect viruses such as the Zika virus, dengue fever, and more. Detectable components of the virus tend to show themselves after the first week of contracting the virus, thus immediacy is less of a concern when testing. The CDC has an additional protocol for doctors to follow if they suspect that a patient has contracted Zika virus, though that information has not yet been made publicly available.

Only one in five people who contract the virus show symptoms, which further complicates its diagnosis. For this reason as well as the fact that the affliction was previously rare and rarely dangerous, a widespread Zika virus test was less a concern to medical professionals. The CDC is now working to combat the virus as best as they can and is reportedly also focusing their efforts on crafting an effective vaccine. Unfortunately, scientists are estimating that such a vaccine is still 10 years away from becoming a reality, primarily due to the lengthy process of passing FDA regulatory boards as well as other entities.

More like this
Taylor Swift, Kerry Washington & More Speak Out On Uvalde Mass Shooting
By Jake Viswanath
Photos Of Boris Johnson Drinking At A Downing Street Lockdown Party Have Surfaced
By Bustle UK
Dua Lipa Just Took A “Pre-Show Dip” In A Dreamy Thong Bikini
By Allie Fasanella
How To Support Gun Control Reform Right Now
By Morgan Brinlee and Carolyn Steber
Get Even More From Bustle — Sign Up For The Newsletter