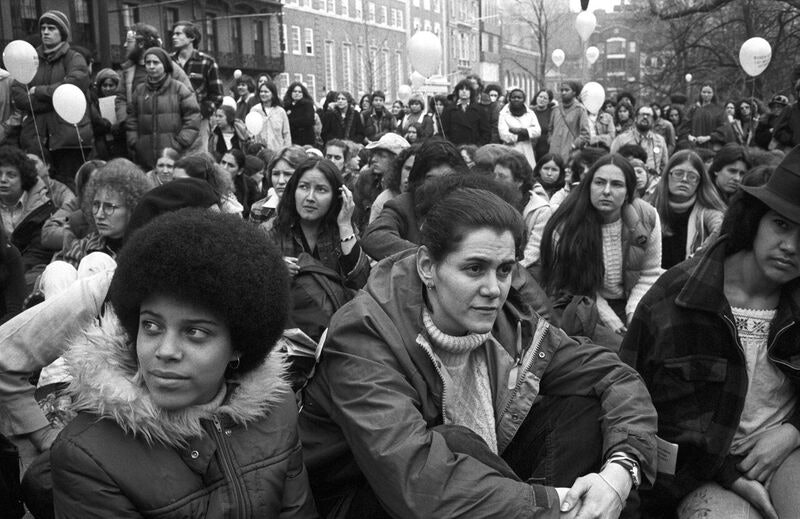 Looking back over the past 100 years of inspiring feminist protests can deliver a confusing mix of effects: appreciation for how much progress toward gender equality the world has seen in such a short period of time, the unsettling awareness of how recently we had to fight for basic rights, and the understanding that we've still got a long way to go. One unfortunate example that hits hard for American women is that the United States ranked 83rd out of 137 countries for women's representation in national legislature in 2014, according to the Pew Research Center. Our work is clearly far from done.

But we can fan our fires with a reminder of the women who have changed the world for the better over the past century. These protesters have acted to reform institutional policies that kept women down, including the lack of voting rights and reproductive rights; they also targeted cultural consciousness, challenging gender roles, and attesting to the dignity of women.

Here, you can take a visual journey with the feminists on the forefront of change, from the suffragists to those working to end violence against women today. Enjoy the perspective and inspiration the following feminist protest images provide.

This group of women took to the streets just over a century ago to get women the vote in the United States. It's hard to believe that women couldn't cast a ballot fewer than 100 years ago. It wasn't until six years after this parade that women were enfranchised in the nation, but these ladies (and a few good men) helped make it happen.

France was behind the United States when it came to giving women the basic political right to vote; there, women weren't enfranchised until 1944. Nine years earlier, this bad*ss woman set fire to voting posters in the streets in protest.

This woman joined the Women's Liberation Movement for a protest of the Miss World Contest on Nov. 20 at Royal Albert Hall in London. The Royal Albert Hall website reported that protesters chanted, “we’re not beautiful, we’re not ugly, we’re angry." Solid work against the objectification of women, ladies!

This demonstration in Pittsburgh, Pennsylvania, took place the year following the Roe v. Wade decision — a reminder that women's reproductive rights continued to be threatened, and still are today.

The National March for Women's Lives in Washington, D.C. on March 9, 1986 was a protest against continuing threats to reproductive rights. That year saw the Supreme Court case Thornburgh v. American College of Obstetricians and Gynecologists, in which Pennsylvania sought to include a provision requiring abortion providers to use techniques that increase the chance of fetal survival, the ACLU reports. The Supreme Court struck it down.

Protesters gathered in front of the International Monetary Fund (IMF) on May 18, 2011 to demand that IMF Managing Director Dominique Strauss-Kahn be fired. Strauss-Kahn was accused of sexually assaulting his maid several days earlier. The charges were later dropped and the matter was settled out of court, but he admitted in a BBC interview that his behavior during the interaction under question was "inappropriate." He sent his resignation letter to the IMF on the day of this protest.

This protest in Tel Aviv was put on by members of the newly-formed Israeli branch of FEMEN, an international women's organization whose protesters often go topless in public and scrawl messages on their bodies as a way of fighting the oppression of women.

Take your cue from these inspiring protests and think about what you can do today to advance gender equality.