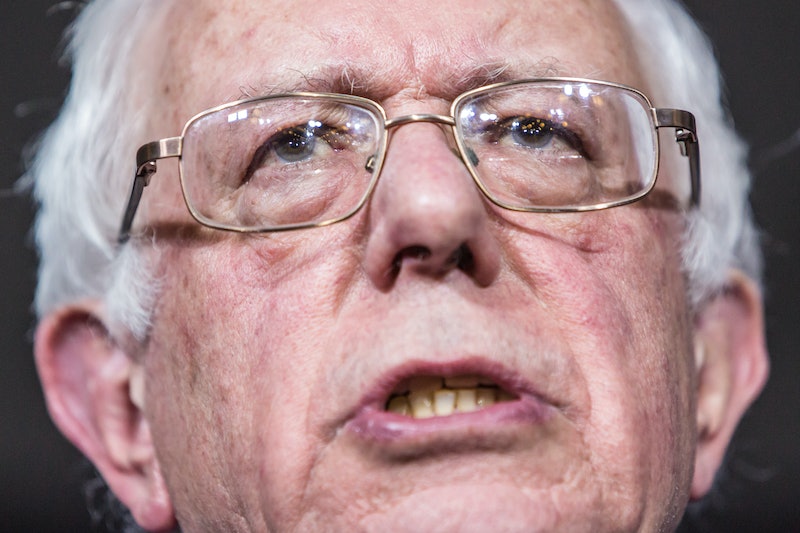 Though Hillary Clinton could shatter the presidential glass ceiling this November, her biggest competition could represent a number of firsts himself. If elected, Bernie Sanders would be the oldest president and the first to embrace the title of Democratic Socialist. Sanders would also be the first Jewish president in U.S. history, though it's becoming increasingly more likely that he'll break ground with that identity sooner than you thought.

If Sanders wins either the Iowa or New Hampshire primaries (or both), he will be the first Jewish presidential candidate to win a nominating contest in either party. The most surprising part about that? So far, not many people seem to be talking about Bernie Sanders' religious affiliation, which could indicate a more open-minded electorate.

Religion is important to most Americans, and the leaders they elect reflect that. Of the 535 members of the 114th Congress, only one member identified as "unaffiliated" with a religious view, and more than 90 percent said they were Christian. Sanders could interrupt a long line of Christian presidents, and yet that doesn't seem to be affecting the way people view him. He doesn't talk about his spiritual views often, so that could account for some of the inattention to the subject, but it could also be a result of the Jewish community's long establishment in America.

Many Americans are still very against the idea of an atheist or a Muslim holding the presidential office, but a Jewish president doesn't incite the same reaction. Rabbi Jonah Pesner, director of the Religious Action Center of Reform Judaism, told The Atlantic:

You have a guy who is from New York with a Brooklyn accent named Bernie who is a viable presidential candidate and nobody is discussing it, which to me is just a remarkable statement of the success of the American Jewish community to be fully integrated and distinct at the same time.

Important to note, however, is that Sanders doesn't identify strongly with Judaism as an organized religion. In fact, he told reporters that he is "not particularly religious," which could potentially hurt him if he proceeds into the general election, considering how strongly many Americans want their leaders to have faith. Sanders speaks about his spirituality more vaguely in comparison to candidates like Ted Cruz, and he feels his Jewish background shaped his politics more than his spirituality. Sanders lost three family members to the Holocaust and said at a breakfast:

So far, Sanders has said very little about his cultural and religious identities, which might be a good thing for democracy. When you divert your attention from a candidate's personal life, you can focus on how he or she proposes to change your country. Sanders has rightfully forced Americans to focus on the big issues, and I hope future candidates will follow suit.