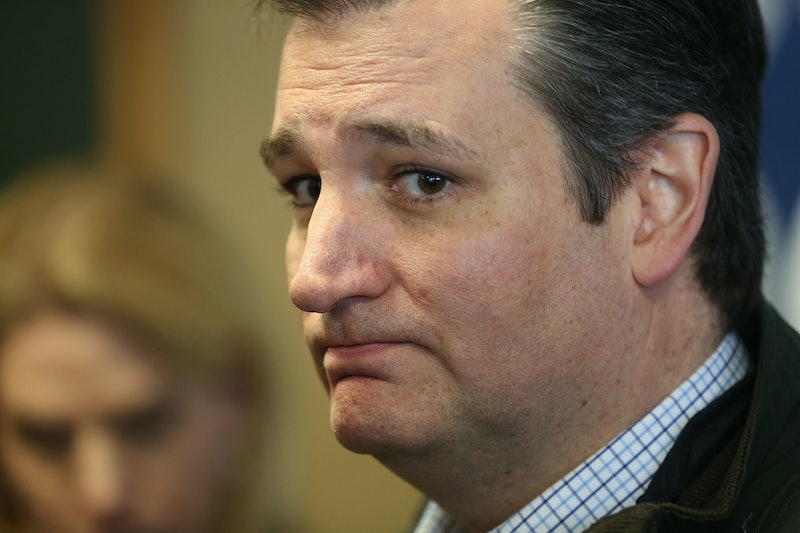 For Ted Cruz, the Iowa caucus probably can't come soon enough. Throughout his bid for the White House, he has faced criticism for his conservative platform, his Canadian birthplace, and his finances, and now Cruz is being attacked on a whole other level. A devoted, unidentified protester has taken to following the Cruz campaign around Iowa while holding a sign that reads, "Ted Cruz likes Nickelback."

The protester, who has refused to give his name to reporters on the campaign trail, has been spotted at Cruz-sponsored events in Iowa throughout the month of January. Each time, he appears to carry the same large sign, white with black text, bearing just the four humiliating words.

Outside at least one event, the protester reportedly showed up dressed as a member of the Royal Canadian Mounted Police and planted Canadian flags around the area where he stood. The Canadian connection has given Cruz trouble in the past — in fact, much of the last Republican debate focused on whether or not Cruz was eligible to serve as president based on his Canadian birth — but being associated with the Canadian band that everyone loves to hate could pose a new threat to his campaign.

Although it makes for a funny punchline, there's actually no evidence that Cruz likes Nickelback. Rather, Cruz has said that he grew up listening to classic rock and that he now also listens to country music. Judge him for those preferences if you'd like, but not for the Nickelback accusations.

Last March, Cruz was asked about his music preferences by CBS This Morning. He gave a touching justification for his relatively newfound love of country music, which was inspired by the Sept. 11 attacks. He explained:

I grew up listening to classic rock and I’ll tell you sort of an odd story. My music tastes changed on 9/11. And it’s a very strange — I actually, intellectually, find this very curious, but on 9/11, I didn’t like how rock music responded. And country music collectively, the way they responded, it resonated with me and I have to say, it — just as a gut level, I had an emotional reaction that says, "These are my people." And so ever since 2001, I listen to country music.

In other words, Cruz probably can't be considered a Nickelback fan — or maybe he just won't admit it. Either way, the band is certainly showing some love for the protester's actions. Nickelback shared the image above on its official Instagram account, calling the protester its "Employee of the Month" for January. All this buzz conveniently comes at the same time that Nickelback is headed back into the studio to work on a new album. We'll have to wait and see if Cruz picks up a copy when it hits stands.

The Nickelback buzz also comes at a time when Cruz can't afford any distractions from his message in Iowa. He has made significant progress in the caucus state recently, narrowing the gap between him and Donald Trump to just under 6 percentage points, according to Real Clear Politics. The Iowa caucus will take place on Monday.