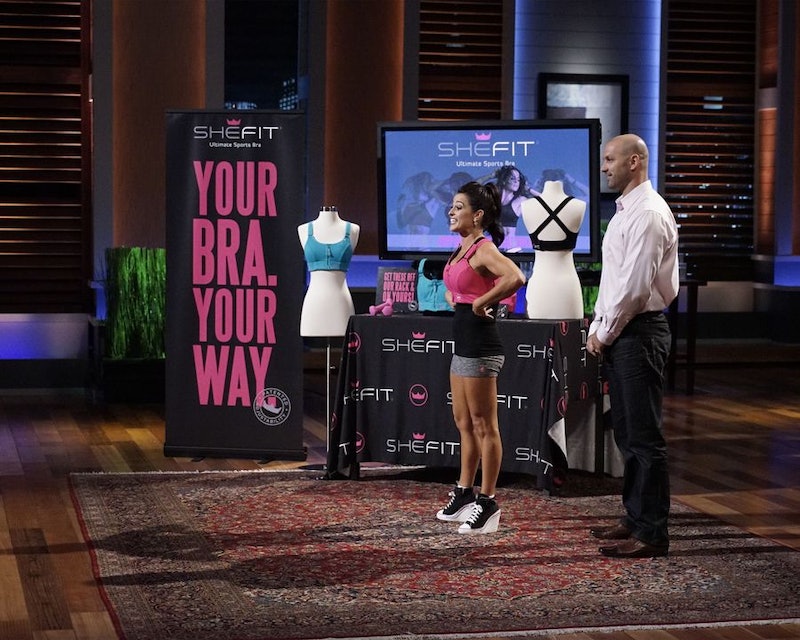 When I watch Shark Tank, I always try to put myself in the seat of the Sharks. I try to think, if I were a bazillionaire entrepreneur, would I think this business have merits? Is it worth investing in? (Usually, I wind up disagreeing with the real Sharks. There's a reason I didn't go to business school, I guess.) Every once in a while, though, a product or service comes along that knocks me out of my Shark fantasy and makes me think like a consumer again. I want that, I think. The Shefit, which will be featured on Jan. 29, is one of those products. So, what is Shark Tank 's Shefit, and where can you buy it?

It's a sports bra, but it's not just a sports bra. It's the sports bra. You can custom-fit it in a million ways. First off, it zippers closed, so you don't have to do that thing where you squeeze and tug and pull to get your sports bra on. Then, you can customize the fit in a million ways: You can make the bust bigger and smaller, you can adjust the straps, you can put in or take out pads, etc. This means you won't have to buy new bras each time you gain or lose weight. And, if you're a new mom, you can even nurse with it.

Sounds like a dream, right? Well, the good news is that you can already buy the bra through the Shefit website, regardless of what the Sharks say. It costs just under $60, but in my opinion, that's a fair price for a sports bra that'll last you through weight changes (and one that's not going to stretch out to boot).

If I seem bullish on the bra without having seen it in action on Shark Tank, it's because I am. I've had the opportunity to interview Sara Moylan, the creator of the Shefit, for the "Entrepreneur Mom" column of Working Mother . What she said there made so much sense. "I never had any intention of starting a business," she told me. "I was trying to solve my own problem. I was wearing two and three sports bras at a time. It was super uncomfortable, and I couldn't get the adjustability I wanted." She came up with her own design pieced together from other bras, just for herself. Then, after talking with other women who had the same problem, she realized a polished version of her Shefit bra was needed in the world.

I love stories like that, with women coming up with solutions to help other women. I only hope the Sharks realize the value as well, and Shefit brings home the big money from Shark Tank.

More like this
Where To Get A TikTok-Approved Welded Bracelet In The UK
By Rebecca Fearn and Orla Pentelow
'Games of Thrones' Fans May Recognise This 'Conversations With Friends' Location
By El Hunt
50 Years After Creating Her Alter Ego, Angelyne Is Still Driving That Pink Convertible
By Gretchen Smail
10 All-Denim Outfits Inspired By Billie Eilish, Bella Hadid, & More
By Allie Fasanella
Get Even More From Bustle — Sign Up For The Newsletter