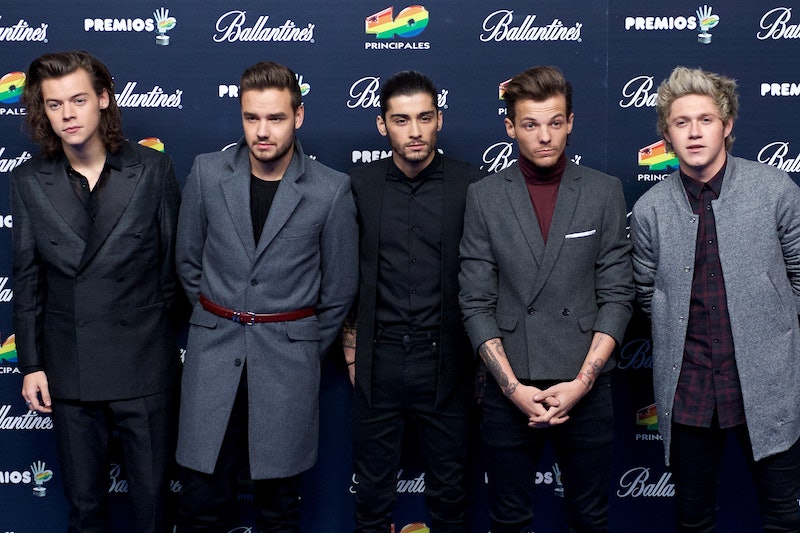 We're only a few months into the One Direction hiatus, and already so many things have happened. Sure, the biggest event happened before the break even started, when Zayn Malik left the band earlier in 2015. His departure was unexpected and dramatic, but the remaining members — Harry Styles, Niall Horan, Louis Tomlinson, and Liam Payne — decided to continue without him. But in the last month alone, two major events have happened that are worth talking about: Tomlinson became a father to an adorable baby boy, and Malik "liked" the photo of his former bandmate's new son on Twitter, as Hollywood Life points out. This gives me serious hope that they're actually friends beneath all their past drama.

If you're not sure what the big deal is about Malik liking Tomlinson's photo, then clearly you've somehow managed to forget about the bad blood between the two in the past. In case you need a refresher, it all kicked off in May 2015, after Malik left One Direction. Tomlinson wasn't happy that Malik was working with Naughty Boy and made fun of a photo the producer posted with Malik. While the initial back and forth took place between Tomlinson and Naughty Boy, Malik soon got involved, and some serious social media drama unfolded between Malik and Tomlinson. It was basically THE WORST. The nonsense continued for what felt like ages, drawing unnecessary divisions between One Direction fans and breaking hearts everywhere. So is that all over?

Of course, social media isn't really the real world, but for celebrities, who know that their words and actions on Twitter, Instagram, Facebook, etc. are all up for public consumption, it can be more meaningful than you'd think. Given that Tomlinson and Malik held their past arguments on Twitter, it has to mean something that Malik liked the photo of Tomlinson and his new son on the same social media site. And the fact that he liked it at all, regardless of where, means that they must have hashed out their differences and made peace, right? That's what I'm thinking.

What's interesting is that the photo Malik liked — one of only 14 things he's ever liked in his time on Twitter — wasn't posted by Tomlinson, but reposted from Tomlinson's Instagram account onto Twitter by a big One Direction fan. How Malik came across the post is beyond me, but somehow, that makes it even more meaningful. Celebrating the birth of a life is a big occasion, especially when you consider that they were longtime bandmates who achieved and experienced worldwide fame together, in all its highs and lows.

While Mailk liking a simple photo of Tomlinson and his son doesn't necessarily mean that the two are going to start up a bromance anytime soon, it's a signal, I think, that they've grown from their past arguments and matured. Not only that, but Malik clearly wishes Tomlinson the best, and I think that's the most heartwarming thing of all, here. Ugh, I'm feeling a little emotional now.