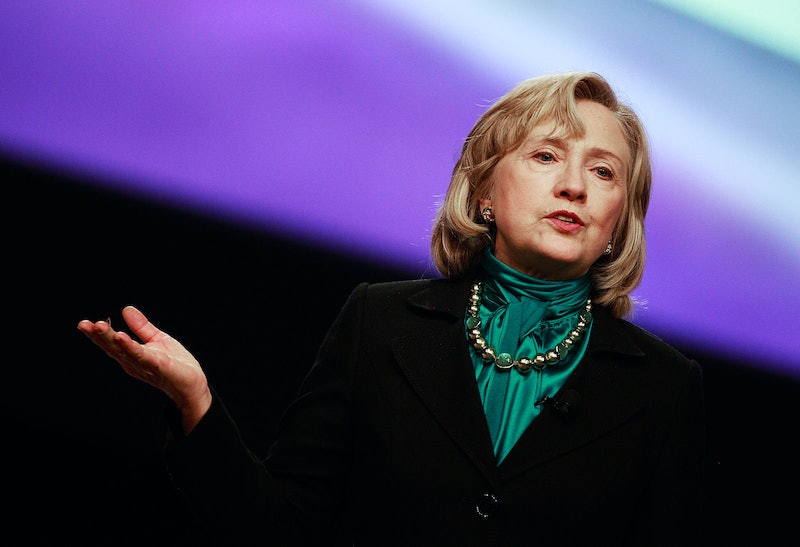 She's been a little busy. Yes, it turns out that Hillary Clinton hasn't driven a car since 1996. "The last time I actually drove a car myself was 1996," Clinton confessed to the National Automobile Dealers Association in New Orleans on Monday. "I remember it very well. Unfortunately, so does the Secret Service, which is why I haven't driven since then." Meanwhile Republican super PAC, America Rising, is trying to cite this as proof that Clinton is out of touch.

Come ON. If the on-point Texts From Hillary tumblr has taught us anything, it's that Hill is too busy in the Driving Seat to be, er, driving. Hill does't drive. She commands. She navigates. She texts. But she sure as hell doesn't have time to spin her own wheels.

"I have to confess: One of the regrets I have about public life is that I can't drive anymore," Clinton told the conference delegates, before making a joke about how much better she still fared in the driving seat compared to Bill.

"My husband thinks that's a blessing, but he's the one who should talk," Clinton said.

When Clinton was first lady, the Secret Service protected Clinton and drove her everywhere she needed to be. When she became a plain and ordinary member of the U.S. Senate, she still needed protection. And when Clinton became secretary of State in 2009, the Diplomatic Security Service then took over care of Clinton, which included driving her about because — guess what — she was the nation's top diplomat and STILL needed protecting, as all senior diplomats do.

This isn't about Hill being out of touch; it's about making sure Hill ISN'T touched, because given Hillary Clinton's role on the world stage, she must have more than a few gazillion enemies on Planet Earth. Putin probably isn't too keen. Nor are all those that think women shouldn't be educated. Nor just those regular crazies, such as LSU student Richard Wargo who was arrested in 2009 for plotting to assassinate Clinton.

If only Clinton had cited the example at her visit to the Dealers Association in Louisiana, maybe the haters wouldn't be hating right now. (Though, that's doubtful.) Given that this attack was planned for a visit Clinton was to make to Baton Rouge, you'd think the closeness to home element might have helped bring it home to them. But no matter. Clinton's too elegant a dame to stress that.