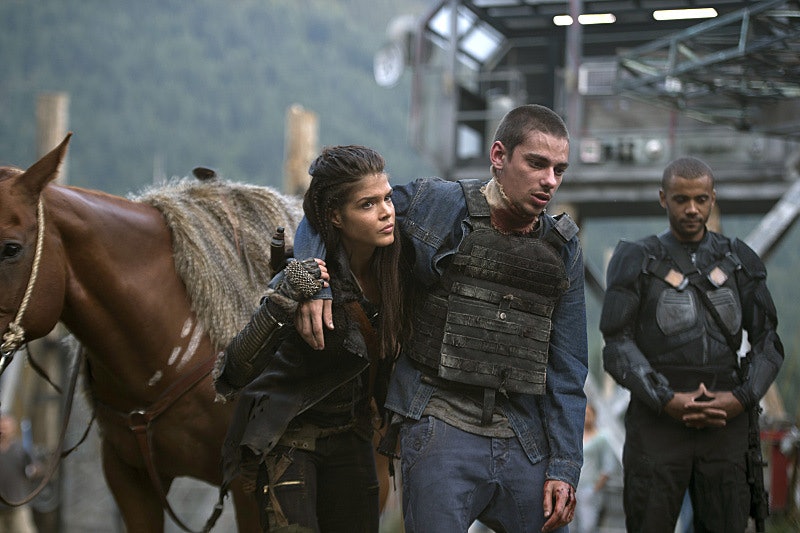 Since its release in 2014, The CW's The 100 has been lauded as a feminist show. The series depicts women as heroes, villains, leaders, and rebels, and it doesn't shy away from putting them in the spotlight. Gender roles aren't the only thing the show gets right, however. The 100 treats race, gender, and sexuality more delicately than a lot of primetime TV shows, and it gets the subjects right time after time.

On a medium as pervasive as television, how the teams behind shows choose to write their characters and their stories means more than just making good plot choices. It means making conscious decisions about what kind of characters they want viewers to idolize and villainize, and what kind of social norms they want to incorporate or disregard. The 100 has the unique opportunity of writing in an almost entirely new world, since the show takes place in a dystopic version of earth, which allows the writers to bend some rules and throw others right out the window. While many shows in the industry are still struggling with diversity on all fronts, The 100 continues to break down and blow past barriers each week that hold back most other shows. Here are 11 times The 100 excelled on the diversity, race, and sexuality fronts.

During the first season of The 100, the Ark council was made up of six members, and guess what? That council was 50/50 men and women (if you don't count Jaha's vote that is). No glass ceilings on the Ark!

Finding a well-written, complex disabled character on TV is hard to do. But, Raven lost the full use of her leg back in Season 2, and it’s still part of her plot line to this day. The show has not shied away from showing the challenges of her paralysis

3. Clarke As A Leader

Too often on television, when the cute, blonde, main character needs to be badass, she’ll roundhouse kick someone in the face to prove she’s awesome. Clarke doesn’t fall into the trap of using her fight as the only way to show strength. Rather, she consistently uses her pragmatism, bravery, and natural leadership skills to be a badass throughout the entirety of the show. No martial arts required.

4. The Death Of The Love Triangle

When it seemed like a Bellamy/Clarke/Finn love triangle might be emerging on the show, the writers killed that possibility right away. Quite literally, actually. Clarke mercy killed Finn and hasn’t given Bellamy a romantic thought in quite a while. Instead the show spent energy on having the characters grow and focused on their struggle to survive, rather than just their love lives. Die, love triangle, die!

Female villains are typically one of two stereotypes: The femme fatal or the evil queen. Whatever the case, they are usually quick to let their emotions be their downfall. Dr. Tsing, however, was a straight up sociopath who let her cruelty be her guide, which was a refreshing take on a female antagonist.

Not only is the actual cast of The 100 diverse, but, in its post-apocalyptic world, we have not seen any discrimination based on race. In this world, what matters most is your ability to survive, not the color of your skin or any other factor.

The 100 making its lead character bisexual is already significant when so few series portray bisexuality, but Clarke’s storyline in particular has always been handled very well. She’s never fit into any stereotypes, and her sexual orientation has never been shown to negatively affect her life in any way. In fact, the main hurdle in her relationship with Lexa is the betrayal and mass genocide of it all. Rather than defining Clarke by her bisexuality, The 100 shows it’s just one part of who she is.

What could have very easily turned into a trite Beauty and the Beast-esque tale, actually turned into something way more complex. Octavia wasn't content to sit around as a damsel, instead choosing to learn to defend herself and becoming a warrior in her own right. Lincoln, on the other hand, shook off the 'kidnapping monster' stigma he started with, revealing himself to be a peace-loving Grounder. Most TV shows would have left this couple in a stagnant "good girl" and "bad boy" dynamic, but The 100 just isn't most TV shows.

Hollywood has a bad habit of making male vulnerability seem like a bad thing (and if you don't believe me, just go check out literally any of the Fast & Furious movies). The 100 ditches that stigma at the door, choosing to let its male character experience every heartbreaking emotion under the sun. Between Lincoln's Reaper detox, Bellamy's guilt over causing the Ark culling, and Jasper's insurmountable grief over Maya, I'd almost wager we've seen more men break down than women, and that's refreshing.

In the recent Season 3 premiere, it’s revealed that Miller had a boyfriend, and it’s given all the pomp and circumstance of announcing he’s wearing shoes. Again, The 100 shows that there is much more to someone than their sexual orientation.

11. The Lack of Sexual Violence

The 100 is not afraid to be gritty and dark and violent, but, as TV Feels points out, it's never chosen to incorporate sexual violence into the show. Not for shock factor. Not for plot progression. Nada. It’s almost like there’s a better way to make a story interesting or something…

In short, the world of The 100 might be a dangerous and violent place to live, but it seems to have done away with a lot of the issues we just can seem to solve in the real world.

More like this
It’s Official: The Bachelorette Is No Longer A Fairy Tale
By Samantha Allen
What’s New On Netflix: 'Never Have I Ever' & 'Indian Matchmaking' Return
By Arya Roshanian
On 'Industry,' Marisa Abela Takes Control
By Morgan Leigh Davies
'A League Of Their Own' Star Abbi Jacobson Is Engaged To Jodi Balfour
By Jake Viswanath
Get Even More From Bustle — Sign Up For The Newsletter