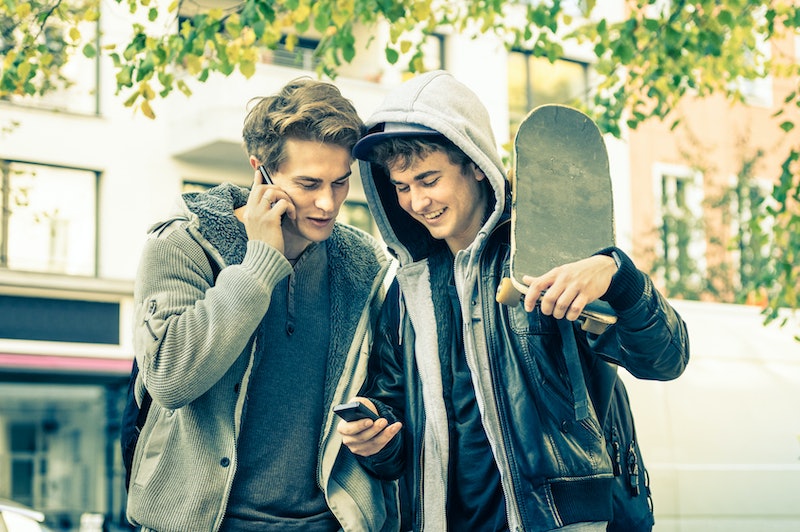 In the ever-splintering world of niche dating apps, BRO is trying to give the curious straight man a chance to exploring his sexuality. The app is marketed towards straight men seeking other straight men for dates, hook-ups, friendship, or simply to bro out together.

Specifically, the app gives men options to look for: "Dates," "Chat," "JUST Friends," "Long-Term Bromance," or "Whatever, Bro." Nude photos are not allowed, in an effort to cut down on some of the beef-fest that is traditionally associated with gay dating apps, but the implication of hook-up potential is high, with fields for disclosing your body type, height, ethnicity, HIV status, and "bro type."

BRO founder Scott Kutler devised the app to make space for and encourage increasingly fluid sexuality in men. While fleeting, exploratory, or label-free same-sex attraction amongst women goes largely unstigmatized, the same is not true for sexual fluidity in men, in spite of its prevalence throughout history. Jane Ward's book Not Gay: Sex Between Straight White Men , published last summer, explores this idea. Guys who express curiosity about same-sex encounters are perceived as on-their-way-to-gay, and if can be difficult for them to explore their sexuality with as little consequence as women, even though there's plenty of precedent for homo-erotic romps amongst straight dudes.

"BRO's main goal is to bring men together — whether they're curious, bi, or gay — and not single anyone out just because they're not 'Scruffy' or 'Jacked.' It's not about what music they listen to or which drag star is their favorite; BRO is about men finding a connection with each other beyond the stereotypes people may try to fit them into.I was inspired mainly because I felt there was a huge segment of men that don't feel welcome in the 'gay' community — be it 'bi' guys or gay men that don't fit the 'gay' stereotype. As well, I wanted to move beyond the hookup culture that many apps and websites have catered to."

But perhaps it's useful to question why bros aren't "welcomed" into the gay community. One of the critiques from the queer community (an essential voice to hear out when exploring nuance in sexual orientation) of both Not Gay... and BRO are that these men looking for men are seeking a queer sexual encounter while still enjoying all the benefits of straight privilege. This is obviously going to anger, sadden, disgust, hurt, or otherwise negatively impact some members of the queer community. Basically, the patrons of BRO are cashing in on all the best parts of queer sexuality — like sex-positivity, a safe space to discuss their non-heteronormative interests, and the general support of a nonjudgemental, like-minded community — while avoiding the painful struggles of queer life. It's not fair.

Furthermore, the language and messaging of BRO seems awfully fem-antagonistic. There's nothing wrong with being masculine-identified, or masculine-oriented in your attraction. But there is something wrong when you demonize or police "effeminate" behavior or feminine presentations within the queer male community. BRO seems to take Grindr's "no fats, no fems, no Asians" profile problem and create an exclusively fit, masc (and let's be honest, probably predominantly white-privileged) space to service those folks. The solution to the "no fats, no fems, no Asians" Grindr bro is not to make a separate, misogynistic, homophobic echo chamber for them to find hookups in; it's to call out, challenge, and eradicate the hateful, internalized misogyny and homophobia many bro-seeking bros suffer from.

There should absolutely be space for everyone to say, "I am attracted to masculinity/femininity/androgyny" and filter by those qualities effectively on dating apps. But that idea gets complicated when we move to block non-heteronormative, non-cisnormative queer folks from a space purporting to promote sexually fluidity. The former promotes inclusivity. The latter is just discriminatory.