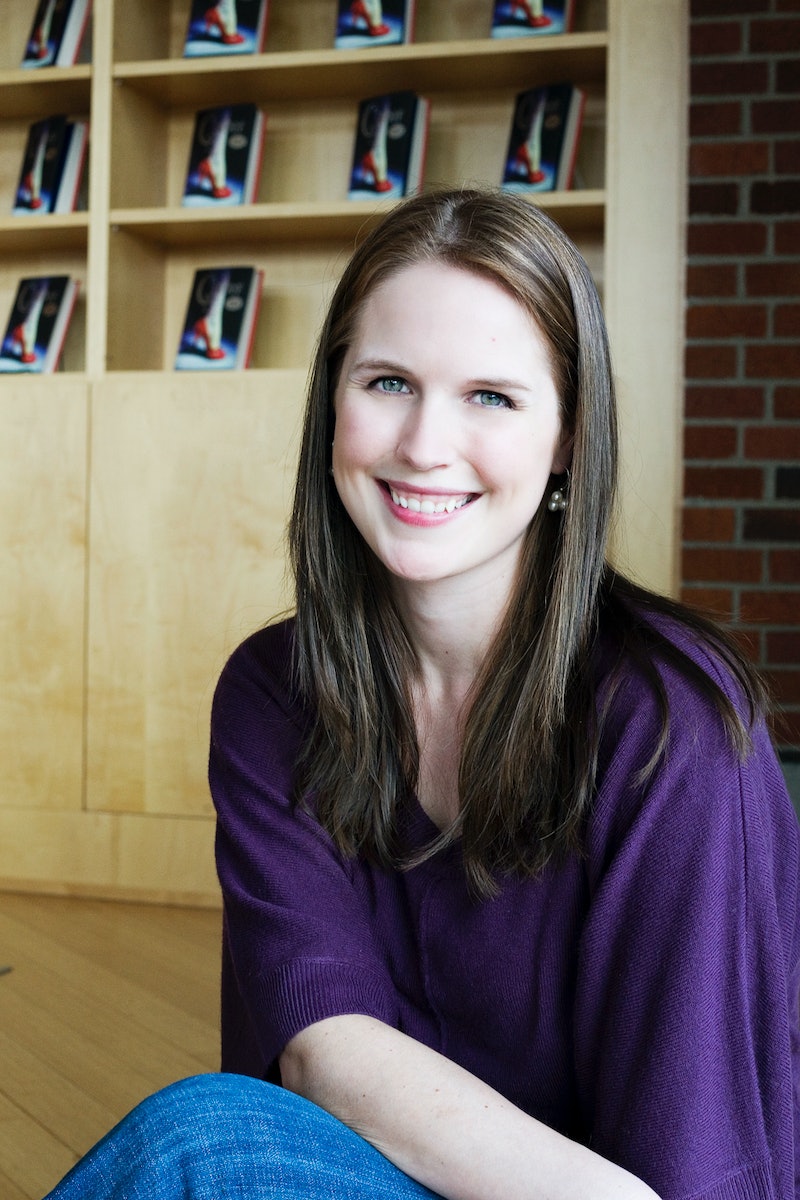 Imagine a futuristic land where YA novels don't just have one powerful heroine — they have four. That's a land that Marissa Meyer has constructed with Lunar Chronicles series. And these ladies aren't just any heroines; they're names familiar from your childhood stories and Disney movies: Cinderella, Little Red Riding Hood, Rapunzel, and Snow White. Meyer has, however, reimagined their lands and their back stories, placing them together into the future where Earth is teetering on the edge of war with Luna, the moon. In book one, Cinder, Cinderella isn't a flaky wannabe princess; she's a half-cyborg mechanic with a loose foot. In Scarlet, Little Red Riding Hood's grandmother is a military pilot veteran who saved a princess from her murderous stepmother. And in Cress, the third installment out February 4, Rapunzel is a hacker trapped on a satellite orbiting Earth. Snow White will take center stage in the final novel, Winter, expected in 2015.

In my discussion with Meyer, we talked about these four heroines and what that means for feminism in YA and the massive global scope of her series — plus she divulges some inside info on Winter.

BUSTLE: Where did you get the idea for the Lunar Chronicles? Did you always intend it to be a series?

MARISSA MEYER: I did always intend for it to be a series. The idea kind of started with an entry I wrote for a writing contest. In this contest, the moderator made a list of 10 things, and you had to choose two things to use in a short story. From her list, I chose to use a fairy tale character and to set my story in the future. And I ended up writing this short story that was this futuristic retelling of "Puss and Boots." It was a lot of fun to write, and it was the first time I ever wrote science fiction, I always considered myself a fantasy girl. And i was so surprised having space ships and androids and robotic talking cats and all of these things really appealed to me — more than I thought they would. And from there I kept thinking about it and I thought, 'What else can I do?' with giving sci-fi twists to these classic fairy tales. And I knew that I wanted to write a series of them, but when I first envisioned it I imagined every book being a standalone story, and it wasn't until later when I was brainstorming them and started outlining the books that it became clear that they were going to become one continuous story in which all of these different fairy tale characters would merge together to take down the evil queen.

You mentioned outlines. Your series is complex, full of characters, plot lines, and back stories. Did you outline all of the books in the series before writing, or did you write and see where the story took you?

I am a huge outline writer. And I knew that because I wanted it to be such an epic story overall that I wanted to have a really good idea of where everything was headed before I started writing so I could work in foreshadowing and drop in little details that don't seem like anything at the time, but as you go further in the story and the books, readers can pick up, 'Oh, that was mentioned in Cinder!' I outlined the first three books in quite a bit of depth before I started writing and I had a three-page summary of where I thought the last book would be.

Fairy tale heroines are often criticized as being passive participants in their own stories. Was that something you intended to subvert with your representations of Cinderella, Red Riding Hood and Rapunzel?

I obviously grew up with Disney; I love Disney movies.

For me, I just wanted to write characters that i found really interesting and I wanted to hang out for a whole book. And I just hoped that readers would respond to them in the same way. It just so happened that in creating those characters it did end up playing on a lot of gender roles and subversions of these old archetypes.

How did you handpick these fairy tale heroines that you chose to write about?

When I first got the idea that I was going to write this series of futuristic fairy tales, I made a list of my some favorite stories — there was maybe a dozen on the list. And I was just brainstorming different things I could do, different sci-fi twists that I could give the stories. And the four that I ended up deciding to tell were the four that I had the best ideas for, and also the ones I could start to envision a plot that would go through all four books and tie them together.

Who is your favorite character to write?

Probably my favorite character to write would be have to be Captain Thorne, who is the talky, arrogant spaceship captain, which every great science fiction series has, and he's just so much fun. I never know what he's going to say or do, and he's one of those characters ... I can just throw him into a scene and let him to his thing and know it will be awesome.

Many YA novels, and even adult novels, write a story in one place in one time, but your series is very wide in its geographical scope, and that allows for multicultural characters. Was that purposeful in your writing?

You know, it wasn't so much in the beginning though I have become more aware of diversity, including a diverse range of characters as I've been writing the series. But when I first started thinking about the series, I knew I wanted to choose different parts of the world to set the different books in, because I wanted the series to have a really big global feel, in part because the issues the characters are facing are big global issues — there's this war happening between Earth and Luna that affects everybody on the planet, and there's this plague that has become an enormous widespread problem. I wanted to set it in different parts of the world because I wanted readers to know that this wasn't just happening in this one city or in this one country; this was something that affects everybody.

Have you already casted these characters in your head?

I try not to! Because they're so their own people in my own head, but I do get fan castings from readers quite often, which I love. I love seeing the different people they think look and remind them of the characters, I think that's a lot of fun.

[Note: I then told Meyer about my idea for Scarlet: Deborah Ann Woll from True Blood]

After Cress, your next book in the Lunar Chronicles is Winter. What can we expect in Snow White's tale?

Princess Winter is Queen Levana's stepdaughter, and she has been raised in the courts of Luna, and she has seen firsthand how messed up their society has gotten in part due to Levana and how crazy she is, and also just seeing how the people around her abuse this Lunar gift they have. And because of that she has made the decision to never use her Lunar gift at all, and that comes with some side effects. Because of that decision she is now slowly going crazy. And so, throughout the book, we see the deterioration of her mind, essentially, which makes her a very interesting character and a lot of fun to write. She's so different from the rest of them.

And can we expect her to interact with all of the heroines you already set up?

Yes. All the plots will continue to merge and interweave, just as they did in the first three book. And it will be a great epic conclusion — I hope!