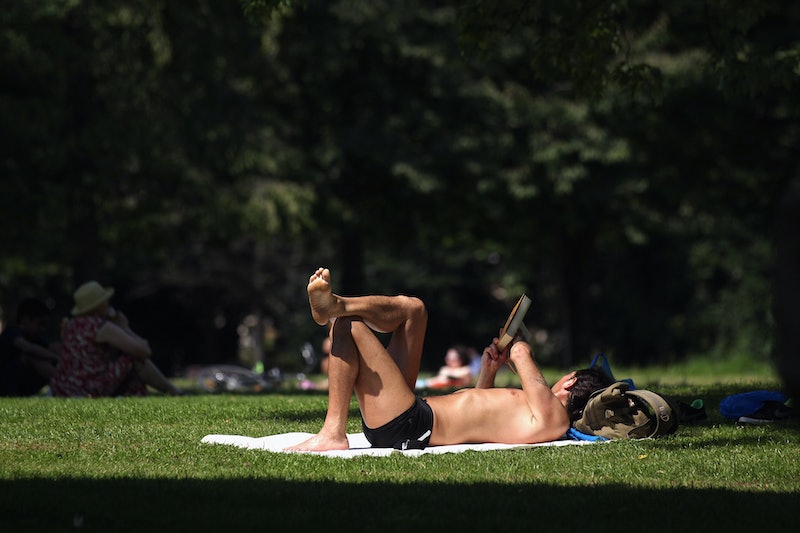 Women's fiction. It's a loaded category. Is it sexist? Is it restrictive? Is it used to trivialize books that millions of women love? Well, probably, but there's an even bigger question here: Why is it alone? After all, women read more than men. So why, if men are the minority of the reading population, have they been cruelly denied a category of their very own? Well, not one to let injustice stand, I hereby propose a category known as "men's fiction" — or "dude lit" if we want to be informal. Because it's about time men got their own category of fiction, am I right? It's so unfair otherwise.

But what goes into such a category? Why, all the books that guys love that women don't, of course. After all, men's fiction should really be a men-only space, in the same way that women's fiction is solid pink. Naturally. So let's see... Well, classic novels are out, as is almost all literary fiction, because everyone knows women read that by the gallon. Coming-of-age stories and understated social commentary, women love that sort of thing. And as any nerd worth her salt knows, even the supposedly dude-dominated genres like sci-fi and fantasy have plenty of female fans – and writers, too. So those are out, too. And I know plenty of women who read mysteries and thrillers, too.

But I will say that in my highly scientific anecdotal experience, I've never met a woman who reads horror novels. So that should probably be in the men's fiction category. And it does seem appropriately boyish – all those monsters and whatnot. A perfect mirror to the girlish romances in women's fiction. And obviously sports novels would also probably appeal mostly to men. Oh, and Westerns. All that ruggedness and... ruggedness, and the main characters are almost always men anyway, so Westerns should totally be men's fiction from now on.

Except books by Annie Proulx. She has much broader appeal, we won't sully her by just putting her in men's fiction and nowhere else.

Then, of course, there are also some works that might not fit these genres exactly, but that are clearly men's fiction. There are no rules as to why of course. But you can just sort of tell, can't you? Don't you ever just pick up a book and say to yourself, "Only a man would like this." The ones that were written by men and for men and about men's issues and on top of that aren't very good anyway. But what can you expect, they're only men's fiction.

And really this category is very important, because how could a publisher possibly market a book to a man if there wasn't even a men's fiction genre? How could men ever feel welcome in a bookstore or on Amazon if they didn't have their own category? If we didn't let them know there are books they are expected to read instead of others? They must have felt so excluded before. Poor dears, not feeling entitled to read anything.

In fact, just to be fair, maybe we should get rid of the women's fiction label for a while. Women had a monopoly on gender based literary genres for such a long time, it only seems fair. And I know it'll be a sacrifice ladies, but there are so many of us reading that surely we can band together and get through it.

So there you have it: from now on there is only men's fiction and fiction. And men can read regular fiction, too, if they want to. But it's just better if they keep their own separate category, too. Just to keep track of what's for men and what's for people. It's better that way, right?