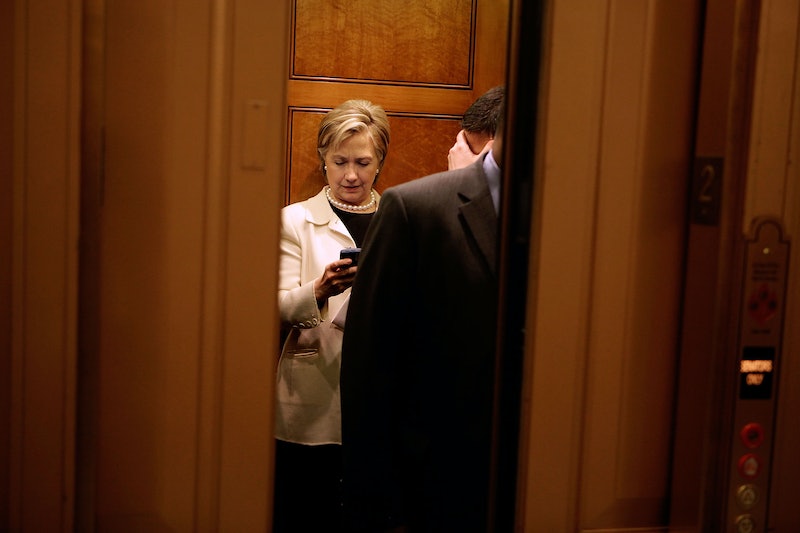 Although all eyes in Iowa were on the seven Republican presidential candidates sparring onstage at the Iowa Events Center in Des Moines, all eyes on Twitter were on the GOP's most-targeted Democratic presidential candidate. Hillary Clinton tweeted the GOP debate and kept with her tradition of countering the policy proposals and numerous attacks on her campaign by Republican candidates Ted Cruz, Marco Rubio, Ben Carson, Chris Christie, Jeb Bush, John Kasich, and Rand Paul with dissenting opinions and tongue-in-cheek retorts.

While never on stage, Clinton has continued to be a major presence at the Republican presidential primary debates as the lengthy list of GOP candidates attempt to position themselves as the one most capable of winning the White House from Clinton. One such candidate was Carly Fiorina, who took a personal dig at Clinton's romantic relationship during the sixth undercard Republican debate two weeks ago. Fiorina continued her barrage of attacks on Clinton Thursday, arguing she "is probably more qualified for the Big House" and "should be prosecuted."

Clinton, who was leading a campaign event in Newton, Iowa, as the undercard debate kicked off Thursday evening, seemed unfazed by her conservative rivals. The Democratic candidate didn't even acknowledge the undercard debate participants Thursday, despite their multiple mentions of her name.

Some of Clinton's best tweets from Thursday's seventh GOP debate clearly defined her stance on this election cycle's most pressing issues and stressed herself as the best woman for the job.

Clinton criticized the Republican presidential candidates for many of their proposals, including abortion, how to defeat terror threats like the Islamic State and defunding Planned Parenthood.

The former secretary of state aggressively criticized her Republican competition for their stances on issues of vital significance to female voters and emphasized her willingness to fight for women in Washington.

The Democratic candidate took multiple opportunities to poke fun at the Republican candidates on stage in Des Moines over Twitter, highlighting important issues she felt they had failed to adequately touch upon during the debate.

Clinton also sought to differentiate herself from Republicans, pointing to many of the candidates' use of anti-Muslim rhetoric.

She also nonchalantly countered Republicans' claims she was unfit for the Oval Office in tweets where you could almost hear the former secretary of state rolling her eyes.

Clinton ended the night with a GIF of herself, visibly unimpressed and shaking her head taken from footage of her testimony during the Benghazi hearings. The GIF was similar to one she tweeted of herself dusting off her shoulder following the Republican debate on Oct. 28.

Clinton has garnered an impressive amount of media coverage from her sarcastic tweeting of Republicans' verbal boxing matches. But shade aside, Clinton's habit of tweeting the Republican presidential debates allows the Democratic candidate to insert herself into the conversation as more than just the GOP's favorite target.