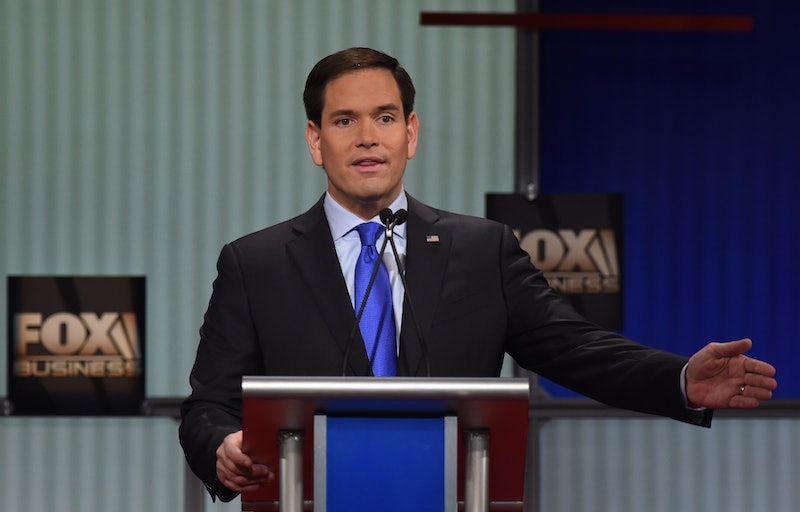 Riding high off an endorsement from The Des Moines Register, GOP candidate Marco Rubio came into the seventh GOP debate as if he'd already won the state of Iowa. The Florida senator took the opportunity of Donald Trump refusing to debate and made it a net positive throughout. Rather than focusing on attacking the Republican front-runner while he was missing in action, Rubio instead highlighted the reasons why The Des Moines Register and his supporters believe that he can steer the country in a new direction. Marco Rubio's closing statements echo his unifying message, shifting the focus from partying in-fighting to winning the 2016 election.

The high-polling candidate released an ad exclusive to Iowa on Thursday just hours before the debate at the Iowa Events Center. "This election is about defeating Hillary Clinton and about saving what makes America unique," Rubio says in the advertisement. He continued to hammer on that message throughout the debate and well into his closing remarks. With just five days to go before the Iowa Caucus, Rubio needed more than a major endorsement to thrust his momentum into overdrive. His debate performance certainly cemented that — especially what Rubio had to say during his closing statement.

The Bible commands us to let our light shine on the world. For over 200 years, America's light has been shining on the world and the world has never been the same again. But now that light is dimming a little after seven years of Barack Obama and that's why on Monday night what will happen here in Iowa is so important. I'm asking you for your vote. Caucus for me on Monday night because if I'm your nominee, I will unite this party and I will defeat Hillary Clinton. And when I'm president, America's light will shine again and the 21st century will be a new American century.

The candidate's focus on American exceptionalism was similarly repeatedly touched upon in between Rubio's thoughts on foreign policy and climate change. Whereas fellow debaters like Ted Cruz and Ben Carson appeared more reactive, the times that Rubio raised his voice showed a more impassioned candidate who had clearly honed in on his message. Rubio was surprisingly pleasant to those sharing the stage with him and, at one point, stated that he respected fellow presidential hopeful Rand Paul. Rubio's closing statements send a clear message that he's looking to move the country and his party in a more positive direction.