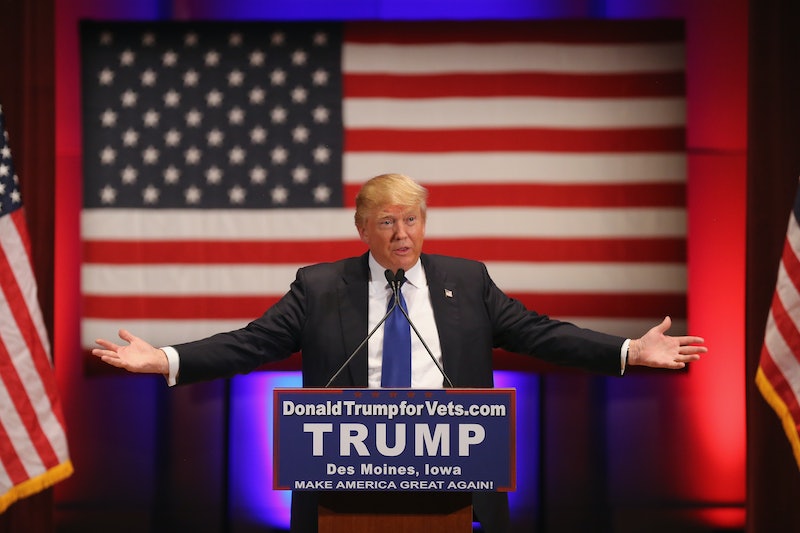 Well, he officially went through with it: Republican primary candidate and front-runner Donald Trump carried out his plan to skip Thursday's GOP debate, holding his own event nearby in Iowa instead. As planned, he focused the event on veterans' issues and raising money for wounded servicemen and women, but he just couldn't resist bringing up the elephant in the room: Trump talked about the GOP debate that was happening simultaneously in an uncharacteristically mild and respectful way.

"I wanted to be about five minutes away," Trump said as he welcomed everyone to his event, noting that his venue was just a few miles from the debate venue in Des Moines, Iowa. He continued, "When you're treated badly, you have to stick up for your rights." Trump also indicated that he intentionally started his event at roughly 9:15 p.m. Eastern time in order to give the debate a slight head start among viewers.

Trump's mild statements at the start of his rally were a far cry from the aggressive tweets he sent out throughout the week in reference to Fox News and anchor Megyn Kelly. He announced on Tuesday that he would not participate in the final Republican debate before next week's Iowa caucus. Trump expressed toward frustration toward Fox News, which hosted Thursday's debate, and Kelly. It's all part of an ongoing feud between Trump and the conservative news network, which began back in August when Fox News held the very first Republican debate of this election cycle.

Trump started to ease up on the conservative news network before his event. During an interview with CNN from the cabin of his private plane just before his rally, Trump revealed that he had spoken with Fox News and indicated that a leader at the network had even apologized to him. He told CNN that if that apology had come earlier, he might have reconsidered joining his fellow candidates on the debate stage down the road.

When it was all said and done, Trump's event had raised a reported $6 million for veterans' organizations. The drama with Fox News could continue, though, as the network released a statement during Trump's event that told a slightly different story than Trump's mild comments. For now, Trump, his fellow candidates, and everyone else will have to wait and see how his decision to skip the debate may or may not affect next week's Iowa caucus.