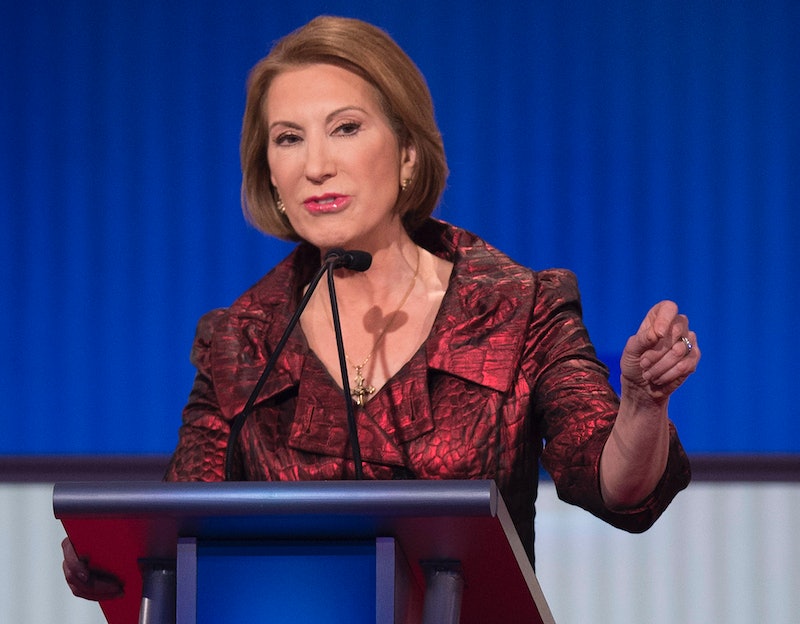 Carly Fiorina needed a strong night at the Fox News undercard debate, with the Iowa caucuses looming, and she came out with an aggressive tact ― Fiorina personally attacked Hillary Clinton at the GOP debate, all while denying she'd ever done anything of the kind. It didn't come as much of a surprise, considering the caustic remark she made towards Clinton during her last debate performance, but regardless, it really stuck out.

In case you missed what started all the brouhaha, it happened during the last GOP undercard debate on Fox Business Network. Despite having previously said that she wouldn't attack Democratic presidential front-runner Hillary Clinton personally ― as she had said last September ― Fiorina directed a searingly personal comment at the former secretary of state, saying, "unlike another woman in this race, I actually love spending time with my husband." If it wasn't obvious enough, she was talking about Hillary and Bill.

When this contradiction was pointed out by moderator Martha MacCallum, however, Fiorina denied (?!) that her comment was a personal attack on Clinton, and then went on to make another one. Here's the... tortured logic, let's say.

It wasn't a personal attack. I was pointing out the fact that Hillary Clinton will do anything to gain and hang on to power. Anything. Listen, if my husband did what Bill Clinton did, I would've left him long ago. So, here's the deal, here's the deal. Hillary Clinton has been climbing the ladder to try to get power. And here now she is trying for the White House, she's probably more qualified for the big house, honestly. She's escaped prosecution more times than El Chapo, perhaps Sean Penn should interview her. The woman should be prosecuted.

And while Ms. Clinton has flown hundreds of thousands of miles around the globe, I have too, and I know that flying is an activity not an accomplishment. While I know that she has held many positions and many titles she has not accomplished much of anything in her life, she's gotten every single foreign policy challenge wrong, and she continues to lie to the American people. You see, it's called the Clinton way. Both Bill and Hillary practice it, the Clinton way. Say whatever you have to say, do whatever you have to say, lie as long as you can get away with it. Hillary Clinton cannot be the president of these United States.

Yeah, sure, no personal attacks there. Where's the personal attack? It's not as though Fiorina claimed that Hillary Clinton's marriage was a political sham. The stuff about prosecution, sure, that's not necessarily a personal attack ― she's basing all that off of longstanding conservative complaints and accusations against Clinton, likely including her role as secretary of state during the 2012 Benghazi attacks. Regardless of their merit, that stuff is at the very least within the realm of the usual political mudslinging.

But dragging Bill's affair with Monica Lewinsky into it, shaming and judging Hillary's judgment for deciding to stay in her marriage, and claiming she has "not accomplished much of anything in her life?" Those are strident and presumptive criticisms that are firmly in the personal realm, and it's a shame that Fiorina wasn't willing to give a slightly more self-reflective answer. Although it's not surprising ― the GOP debate audience craves its usual portions of red meat, after all.