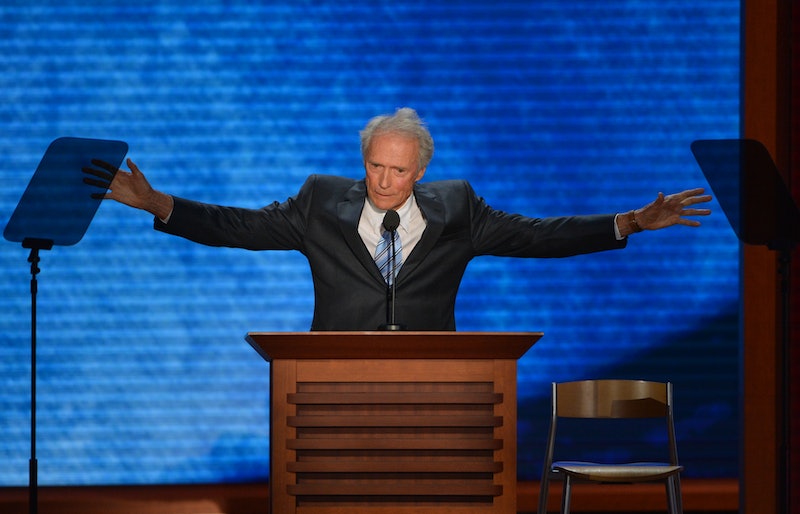 Audience members at the Iowa Events Center and viewers at home couldn't have known what to expect for Thursday night's Republican debate when it came to leading candidate Donald Trump's absence. With an announcement by Fox News that the network would leave a podium on stage for Trump, were Americans to hope that Trump would make a surprise appearance? Were they to take the network's gesture as an opportunity to laugh at Trump's decision to play hooky? In the midst of the confusion, some chose to think of who would be best suited to stand in Trump's place. Several Twitter users spoke of their desire for Clint Eastwood to replace Donald Trump's empty podium spot at Thursday night's primetime GOP debate, and their reasoning for the switch was spot-on. (Update: Fox News decided not to leave an empty podium on stage where Trump would have stood.)

You could argue that the Republican National Convention always offers more than a bit of entertainment for both the eyes and the ears. 2012's RNC went above and beyond what anyone could have expected, though, when longtime actor Clint Eastwood not only gave a surprise speech, but gave a surprise speech to an empty chair.

The chair, of course, had a purpose, if only symbolic. Viewers were meant to pretend an invisible President Barack Obama was sitting in that chair as Eastwood did everything from scold the chair for its poor job in office to reply to the chair's imagined responses. And once the rumor that a podium would sit upon that stage on Iowa despite Trump's absence, folks on Twitter were quick to spot the similarities between Eastwood's empty chair and Trump's empty podium.

So, given the circumstances, who would possibly be a better choice than Eastwood to stand at — er, next to — Trump's empty podium during the primetime round and scold it however he feels necessary?

Tweeters were willing to give Eastwood free reign not only to yell, but to do pretty much whatever he wanted. I mean, you just don't mess with Clint.

There were also suggestions that the candidates actually in attendance at the debate should simply emulate Eastwood's performance at the 2012 event.

Then there were those who went even further, pointing out that Eastwood should probably just replace all the candidates.

Just as long as Eastwood didn't really believe there was someone sitting in that chair, right?