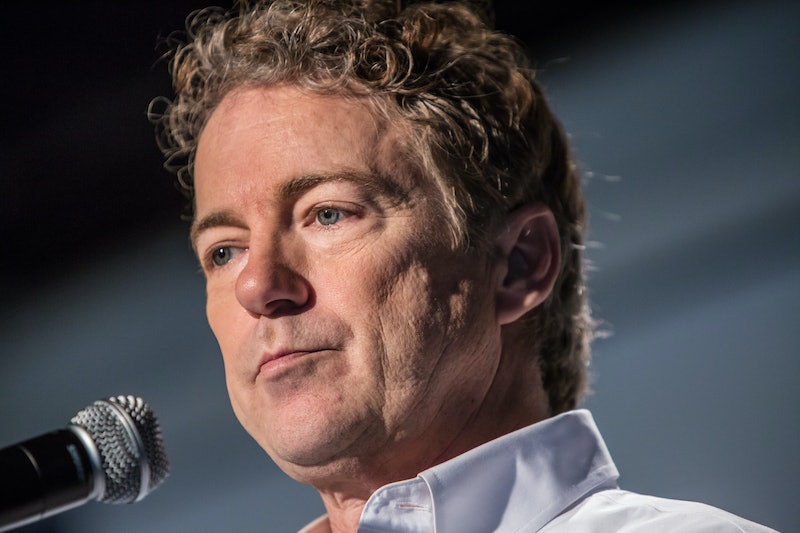 On Thursday night, Fox News moderator Bret Baier asked one of the candidates about their vaunted political lineage, but it wasn't Jeb Bush this time ― Rand Paul talked about his dad, Ron Paul, and pushed back against the notion that Texas Sen. Ted Cruz is the true inheritor of his father's political legacy.

It was a pretty interesting moment, given the unique nature of the Paul family's libertarian-right political tradition. It came pretty early on in the debate, when Baier asked Paul, "Did you make a mistake by not more fully embracing your father politically at the beginning of this campaign?" It's a question that's been asked before, as some former Ron Paul supporters have been disappointed that Rand isn't such a spitting political image of his father.

Here's how Paul responded, although if you have the time and want to get a proper sense of it, you should really watch the video. There's something in the tone, more so than the words ― Paul sounds a little tired, but also speaks with a certain reverence when speaking about his father. Ron Paul, for what it's worth, achieved more tangible success as a fringe candidate in his 2008 and 2012 presidential races than Rand looks likely to at this point.

You know, I've always had a great deal of respect, there's probably no one I respect more in the country or in recent history than my father. I think he was probably the most honest man in politics that we've ever seen in a generation. And so, in no way have I ever said that I don't embrace my father, or love my father, or appreciate everything he's done for the country.

A nice, heartfelt response, right? And yet, the younger Paul didn't stop there ― he also used his father's vaunted political record to take a few shots at Cruz, needling him for missing a congressional vote on auditing the Federal Reserve, which was perhaps Ron Paul's most ardent position.

I think what's interesting about where that liberty vote goes that my father brought to the Republican Party is, I don't think they're necessarily going to go for Ted. You know, Ted didn't show up, We had an audit the Fed vote, which was the biggest thing my dad was advocating for 30 years, Ted didn't have time to show up. He was the only Republican that didn't show up for it. So, I think that really, that vote is going to stay in the Paul household, I think more of it's coming, and it's gonna grow.

All in all, it was a pretty concise, strong moment for Paul, who really flourished in this debate without Donald Trump being around to suck up all the air and attention. Whether he's being realistic when he says he'll get his father's so-called freedom vote, however, is another matter altogether ― remember, Ron Paul actually won the Iowa caucuses back in 2012.