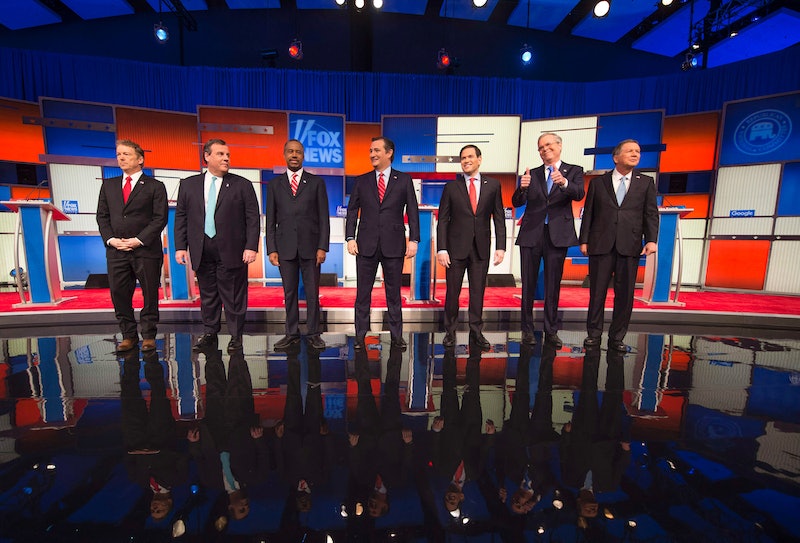 The seventh GOP debate has already seen one of its more awkward moments within the first 10 minutes of candidates taking the stage at the Iowa Event Center. Right off the bat, moderator Megyn Kelly addressed what she called the elephant currently not present in the room, making a sly dig at Republican front-runner Donald Trump choosing to miss the debate and instead hold a rally somewhere else in Des Moines. As candidates continued to be quizzed on their thoughts on Trump, one of the Donald's fellow candidates and a frequent recipient of his barbs spoke up. Jeb Bush called Donald Trump a teddy bear in an attempt to sarcastically highlight the politicians' tenuous relationship. The joke sadly missed its mark.

The former Florida governor was really never one for comedic timing and certainly hasn't had an impressive showing at the GOP debate in many moons. Add to that the fact that Ted Cruz had already impressively unloaded on Trump's absenteeism and you've got a dig at the candidate that comes in way too late. Bush then insinuates that his fellow candidates were "in the witness protection program" while he was facing Trump head on. The comment sounds ridiculous in the face of the many Republicans and Democrats who have continued to call out a candidate who simply isn't there.

What's even stranger about Bush's comments is the fact that they seemingly came out of nowhere after the candidate had been asked about his establishment politician status. Unlike Trump, who holds zero political experience yet aspires to lead the country, it almost goes without saying that Bush comes from a highly political family. The former Florida governor has loads of experience himself, yet has continued to be weighed down by Trump's debate antics.

Bush has been described as a candidate who looks suspiciously like he's running a race he's not enjoying. Perhaps the failed attempt at humor is a way to rectify that sinking suspicion that the presidential hopeful is only in this 2016 election race for the sake of posturing. It certainly can't hurt those following the GOP debate at home and with the meme-making skills to turn a perfectly good teddy bear into a Trump-y bear. Bush may not necessarily win this debate outright but he may very well win the hearts and minds of social media users everywhere as they clamor to turn his weird joke into a reality.