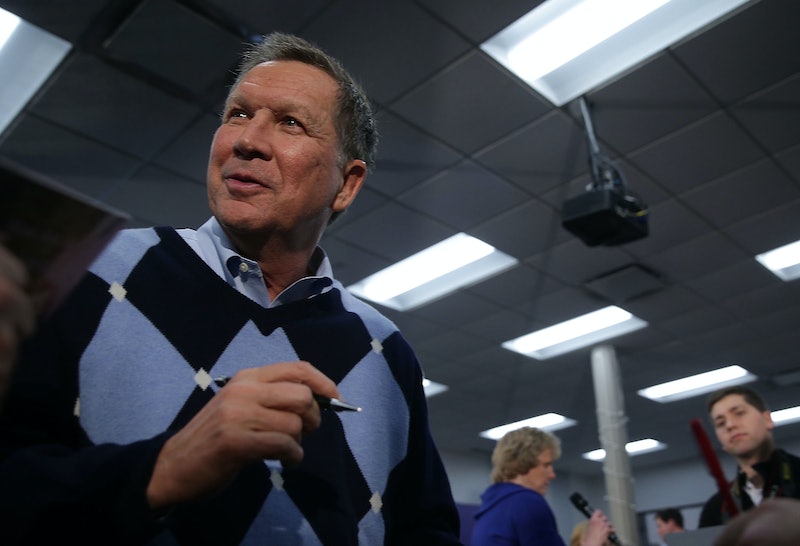 Remember John Kasich? Nah, me neither. But apparently he beat out enough people to make it to the last main stage debate before the Iowa Caucus, and he's making a last ditch attempt to convince the American people that he has a fighting chance in the Republican primaries. According to the candidate on Thursday evening, voters have three paths to venture down: the establishment lane, the anti-establishment lane, and this twisted road called the "Kasich lane." It took all of about 10 seconds for Twitter to rip that last one to shreds.

Apparently, this isn't the first time that Kasich has trotted this mythical road out. In an interview with Boston's WBUR three days before the debate, Kasich attempted to make this same farfetched metaphor about the establishment pendulum and himself. The problem with making yourself into a noun is that it makes you seem as if you think you might be relevant, and opens you to Twitter/general Internet mocking if you're, uh, you know, not. In Kasich's case, you know that he isn't relevant in the least, or at least not in the grand scheme of things. The Ohio governor is tied for second with Texas Sen. Ted Cruz, but Public Policy Polling puts him at 2 percent in the big show, the Iowa Caucus, tied with New Jersey Gov. Chris Christie.

So it's unsurprising that Twitter immediately mocked the Kasich Lane:

And it turns out that Kasich could even end at a (dun-dun-duuuuuun) Democratic candidate:

So it seems that Kasich Lane is a street that Republicans and Democrats want to avoid. That's not looking good for your campaign, Kasich.

That was, perhaps, the most notable thing that Kasich said the entire debate. Lesson learned? Don't throw out a memorable/memeable line unless you're going to leave us with something a little more substantive at the end of the night.