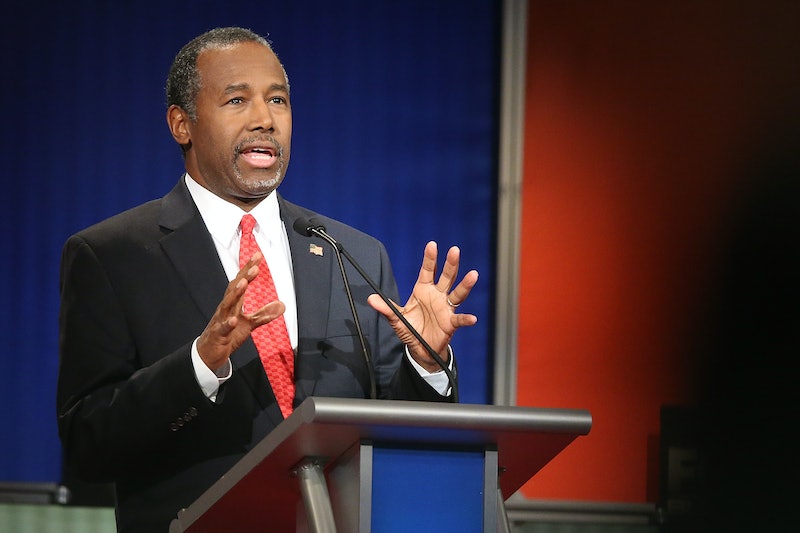 It is a truth universally acknowledged that Ben Carson is one of the only candidates on the Republican presidential candidacy debate stage who has absolutely no political experience. In Thursday night's debate preceding the Iowa caucuses on Feb. 1, and the New Hampshire primaries that follow on Feb. 9., he declared that he is the only candidate on stage "without a political title." Furthermore, Carson called his lack of political experience an advantage that gives him special management skills he can use in the presidency. Some Americans are asking when America reached this culmination of disdain toward traditional politicians, but many citizens are speaking out on the issue to explain their perspective.

In a recent CNN article, 150 Americans explained why they are voting for Donald Trump, citing reasons like a distrust of President Obama and politicians with similar political backgrounds, as well as Trump's anti-establishment, unfiltered ability to "just not give a f***," as Trump supporter in Raleigh, North Carolina, Nicomi Kloempken explained. Carly Fiorina summed up her own thoughts on the matter last year in Iowa, stating:

Eighty percent, 80 percent of the American people believe that we have a professional political class of both parties that is more concerned with the preservation of their power, privilege and position than on getting any work done.

Of course, on the Democratic side, Bernie Sanders is the non-politician politician, as evidenced via his anti-establishment rhetoric and lack of a Super PAC, which contrasts him to Hillary Clinton.

All of these examples of individuals with careers outside the political sphere — save for Sanders, who is merely non-establishment — beg the question of whether a lack of political experience is beneficial or detrimental to serving in the nation's highest office. Commander-in-chief is not a role to take lightly, which each candidate repeatedly acknowledges in appearance after appearance, debate after debate.

Should America then, on a wider scale, concede to the logical fallacy that is less experience equating to greater reliability? Is this simply a trend, just as change conquered in 2008? It is difficult to say, but the evidence revealing political frustration is stark. It is the rationale behind the Trump, Carson, and Fiorina movement, and the principle that has earned Sanders so many ardent followers.

This is not to compare Sanders' decades of political participation and expertise to any one newcomer, but rather, to highlight the similarities of the non-establishment candidate.

Whether or not this course of non-political politicians is the correct one seems somehow less important than a rampant desire to proverbially shake up the system. As the caucuses and primaries approach, America will make her views known — but only active voters will accomplish that — and the world will watch as America makes an important choice that could alter the course of history. Who knows? Carson could have a real point, after all.