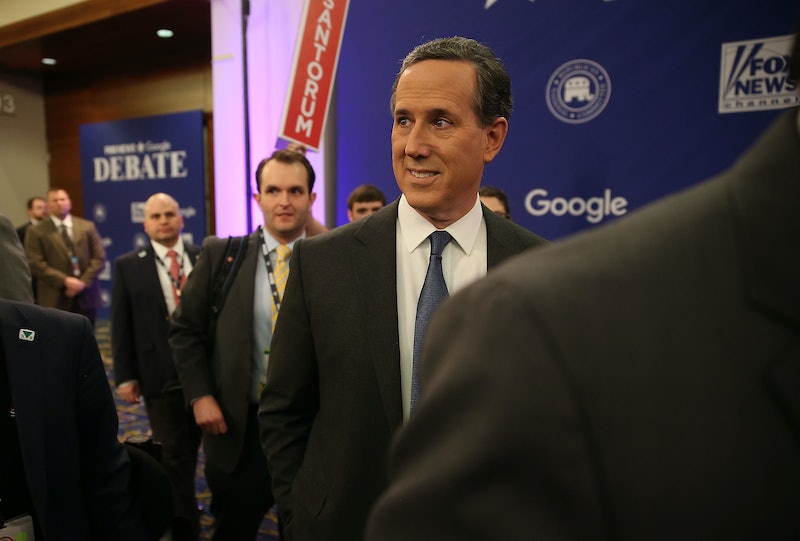 After participating in Thursday's undercard debate in Des Moines, Iowa, Mike Huckabee and Rick Santorum appeared at Donald Trump's fundraising event nearby. It was a good opportunity for Santorum and Huckabee to get a little extra airtime while the primetime debate was going on across town, but things got awkward as soon as the two Trump opponents got up on the same stage as him.

Trump held his event at Drake University, just a few miles from the event center where Fox News's primetime GOP debate took place simultaneously. Santorum and Huckabee had appeared in Fox News's undercard debate prior to Trump's event, but they then appeared at their opponent's rally in order to show support for veterans. Trump's event was designed to raise money for wounded veterans because he had made it clear that he would rather spend his time raising money for that cause than making money for Fox News by appearing in a debate.

During Trump's event, the Republican front-runner invited Santorum and Huckabee up on stage to say a few words to the crowd. Santorum immediately noted the awkwardness, joking that he wouldn't stand directly behind the podium in order to avoid being photographed with the Trump sign squarely in front of him. "I'm supporting another candidate," he quipped.

Huckabee also addressed the audience, although he didn't seem to have a problem standing behind the podium. Both Santorum and Huckabee expressed their support for veterans' issues. The overall consensus among the awkward trio was that it's important to come together for veterans (and for any issue that matters).

Shortly after leaving Trump's stage, Santorum justified his attendance on CNN. When asked why he appeared at his opponent's event, Santorum told CNN's Don Lemon, "I grew up volunteering and helping veterans," noting that both of his parents worked for the Veterans Administration. "If someone says, 'Come and help vets,' the answer is always yes," he continued.

Despite the awkward visual created by having three competing candidates standing behind a Trump-branded podium, the event may have been a good move for Santorum and Huckabee. At the time of this writing, viewership numbers had not been made available, but a Trump ally noted during CNN's broadcast of the fundraising event that it was available to be picked up by any news outlet, whereas Thursday's debates could only be broadcast on Fox News. As a result, Santorum and Huckabee undoubtedly multiplied their audience for the night.