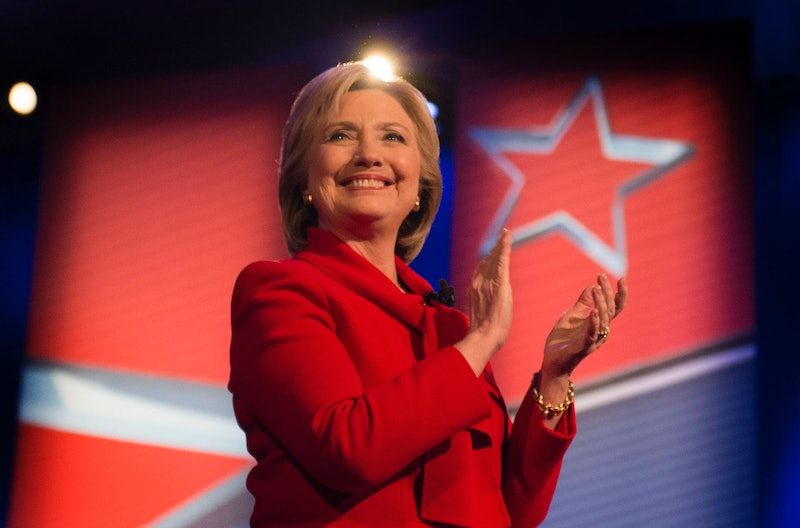 As the top Republican candidates (minus Donald Trump) duked it out on stage in the seventh GOP debate in Des Moines, Iowa, Hillary Clinton tweeted about GOP candidates' Planned Parenthood attacks, showcasing why she's the best presidential candidate for women's health. New Jersey Governor Chris Christie said Thursday night that he would defund Planned Parenthood, and former Arkansas Governor Mike Huckabee said he would not only defund the women's health organization, but promised to eliminate abortion access altogether as president. Clinton was appalled by their comments, and she immediately took to social media to bash the extreme agendas.

During the debate, Chris Christie explained one thing he would do to decrease the federal budget, saying: "How about one that I've done in New Jersey for the last six years? That's get rid of Planned Parenthood funding from the United States of America." Clinton not only supports giving federal funding to Planned Parenthood, but is a strong proponent of giving women autonomy over their own bodies and keeping abortion accessible for women throughout the country. After apparently waiting for a mention of the health organization in the Republican forum, Clinton tweeted: "There it is: the first candidate at #GOPdebate bragging about defunding Planned Parenthood. We can't let them near the Oval Office." Among other issues, the Democratic front-runner believes America needs her as its leader to defend and fund women's health.

When Christie was asked if he would do anything bigger than defund Planned Parenthood, he said:

Earlier in the undercard debate, Huckabee went even further than Christie, saying: "It's not enough to defund Planned Parenthood... let's do something bolder. Let's get rid of abortion once and for all." Clinton clearly didn't pay attention to the bottom four Republican contenders and waited until it came up in the primetime forum to weigh in on the topic. However, Huckabee's stance was even more extreme that Christie's, promising to completely outlaw abortion (which a president can't legally do, by the way). Christie's talk of abortion as murder hints at wanting to make abortion illegal, but Huckabee was much more explicit about wanting to do so.

Clinton's tweet standing up for Planned Parenthood gave women's health the voice it desperately needed as Republicans championed stripping the organization of its federal funding.