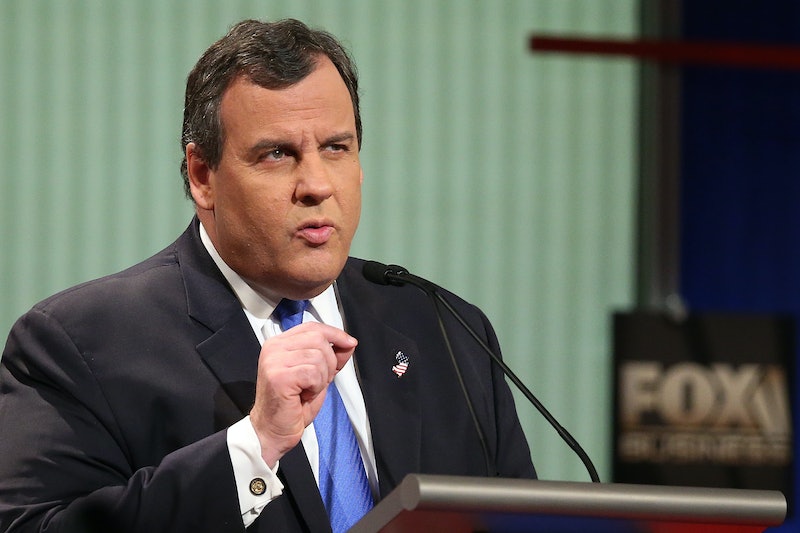 The GOP is always talking about entitlements, and it wouldn't be a GOP debate without a candidate conflating a woman's right to reproductive health (you know, being a human being) with instead being an "entitlement" issue. Republican candidate Chris Christie mixed up those pesky human rights with entitlements (a word thrown around by conservatives that typically only means things not given to white men) when he was asked to "name one thing the federal government does now that it should not do at all." His answer, trailing the same school of thought that has dominated much of the GOP presidential race, was Planned Parenthood. But the fact of the matter is, gutting Planned Parenthood shouldn't be any president's priority.

The New Jersey governor was quick to assert that he had gotten rid of Planned Parenthood funding for the previous six years while in office. When asked by the moderator if there was anything "bigger than that" that a Christie presidency would plan to do away with, the governor was quick to reply:

Christie, however, has been an interesting figure for reproductive rights, in that he hasn't always opposed them. Despite cutting his state's $7.5 million family planning budget, he at one point reportedly donated to Planned Parenthood. In a 1994 interview with the Newark Star-Ledger, Christie was quoted as saying: "I support Planned Parenthood privately with my personal contribution and that should be the goal of any such agency, to find private donations. It's also no secret that I am pro-choice." He has since flip-flopped on the statement, denying having ever contributed to the women's health organization in a recent Face The Nation interview.

Regardless, however, of Christie or any other candidate's back-and-forth on Planned Parenthood, access to reproductive health care should be seen for what it is: a right, not an entitlement. Assuming that any president, regardless of party lines, has the best interest of the country's people at heart (and doesn't see them as a mere bottom line), no president should want to strip the fundamental rights of half the population.

Christie's comments on nationally gutting Planned Parenthood should not be seen as a simple in step statement for the Republican Party. His words match the general GOP sentiment on reproductive rights, and it should therefore be a voter's duty to see that they never come to fruition.