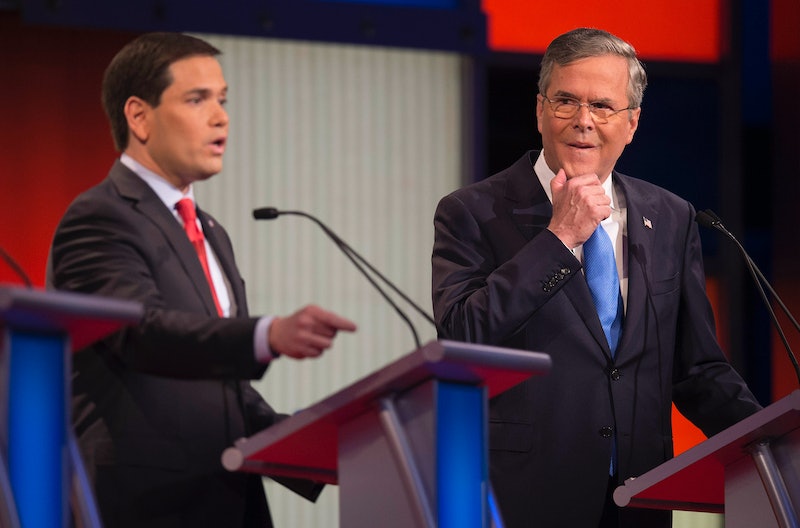 The 2016 election has utilized technology like no other cycle before it. During the copious debates that have taken place, host networks have partnered with the likes of Google Trends and YouTube to provide real time analytics on what viewers are talking about while also giving popular creators an opportunity to speak for the people. The seventh GOP debate utilized both tools for an added depth to the event. Despite its immense popularity, some candidates apparently didn't get the memo about what YouTube is. For that reason, Jeb Bush has the funniest GOP debate quote of the night by referring to it as "the YouTube."

The former Florida governor responded to a question from Dulce Candy, a prominent YouTube star whose makeup tutorials have earned her millions of fans. Bush congratulated Candy on being a successful entrepreneur of "the YouTube" in a particularly cringe-worthy moment that only got worse once Candy asked her question about immigration. This moment is eerily similar in its out of touch qualities to that of the Democratic debate in which Hillary Clinton erroneously congratulated Connor Franta on his "five million views." Franta has over 5.2 million subscribers and millions more views of his YouTube videos.

Candy, nonetheless, got a lot of love from Bush, even if he sounded like he'd never seen a video on the Internet before. Following her question to fellow Republican presidential hopeful Ben Carson, Bush had the opportunity to speak his piece about enacting a pathway to citizenship. He instead chose to awkwardly compliment her. Bush said:

Bush's forward approach has been widely mocked on social media, as has his comment about "the YouTube." The popular video powerhouse has been online for over a decade and yet the website appears to be news to Bush (not to mention the debate was co-hosted by YouTube owner Google). This is apparently a big year for the candidate, who has undoubtedly discovered Twitter and Google through their debate partnerships. It's certainly bringing a whole lot of comedic value to the first Trump-less debate of the season.