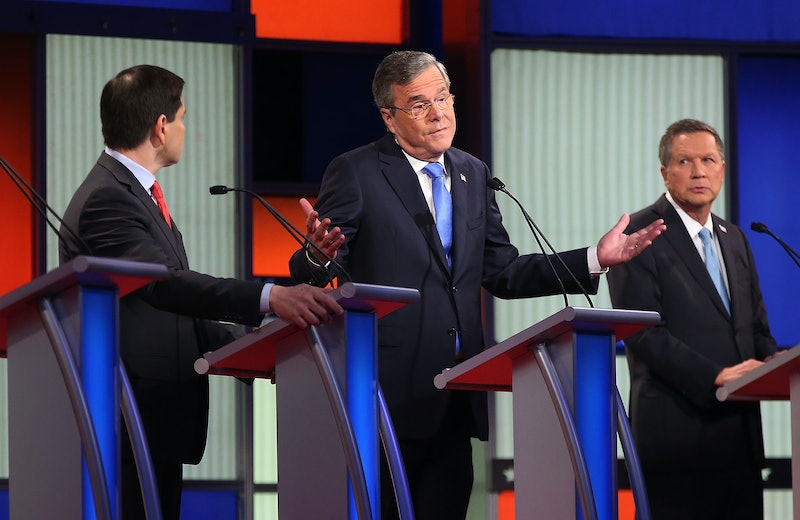 Although he's often described as having one of the loudest mouths in politics, Donald Trump is, surprisingly, not always the most talkative Republican candidate during presidential primary debates. That honor has traditionally gone to Sen. Ted Cruz. However, with his biggest nemesis opting to sit the seventh round of debates out (Trump claimed Fox News moderator Megyn Kelly treated him unfairly), Cruz found there was less to talk about, allowing Florida Sen. Marco Rubio to talk the most during the debate in Des Moines, Iowa. Rubio talked for an estimated total of 13 minutes and 31 seconds, according to NPR's On The Clock log.

Trump's absence didn't leave Cruz speechless, though. The Texas senator clocked a total of 13 minutes and 11 seconds of speech time during Thursday's debate to come in just seconds behind Rubio, according to NPR. Politico's record of the candidates' talk time claims Cruz spoke for 13 minutes and 17 seconds, 22 seconds shy of the 13 minutes and 39 seconds they recorded for Rubio.

Former Florida Gov. Jeb Bush and Ohio Gov. John Kasich managed to move up the ranks in terms of talk time, with Bush coming in with the third highest amount of talking minutes and Kasich right behind him. According to NPR, Bush talked his way through nine minutes and 24 seconds, an overall drop from the 12 minutes and 36 seconds that ranked him six out of seven in talk time at the previous debate held Jan. 14 in South Carolina. Kasich spoke the least out of all the candidates at the sixth debate, trailing Bush with 12 minutes and 26 seconds, according to NPR.

New Jersey Gov. Chris Christie came only a few dozen seconds behind Kasich with eight minutes and 22 seconds of total speaking time. Trailing him was Kentucky Sen. Rand Paul, who returned to the primetime stage Thursday after a short undercard debacle earlier in the month, with seven minutes and 56 seconds. Retired neurosurgeon Ben Carson appeared visibly defeated onstage and spoke for only six minutes and 11 seconds in total, more than a minute and a half less than any other candidate.

With the Iowa caucuses and the New Hampshire primary on the horizon, several of the Republican presidential candidates sought to capitalize on Trump's absence by taking a more aggressive and assertive stance on the stage Thursday to wrangle themselves as much time in front of voters as possible before polls open Monday. But with Trump still dominating conversations between voters on social media, there's no telling if the added seconds will be enough to gain on the GOP front-runner at the polls.