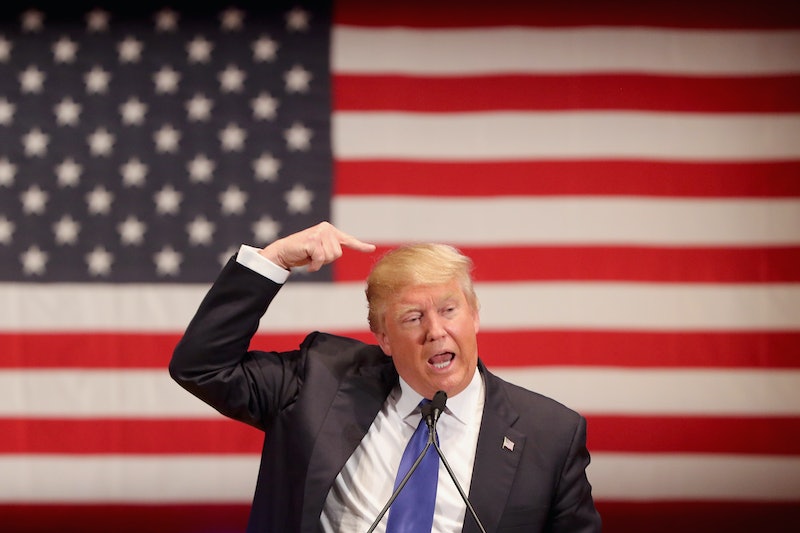 Thursday night was the first Republican presidential debate that did not include the presence of The Donald. Unusual as it was, the GOP front-runner was not entirely left behind, as he did not go without an occasional allusion throughout the event. The second debate of the evening featured a few select mentions of Donald Trump. Though the exact number of times shouldn't be so important, it was a lot: 27.

In any case, the ubiquitousness of his very public feud with Megyn Kelly may have left the other Republicans a bit frustrated that he could just back out on a whim, though try as they might, they could not help but speak his name. This is particularly true since Kelly brought it up in the very first question. She asked Ted Cruz:

Senator Cruz, before we get to the issues, let's address the elephant not in the room tonight. Donald Trump has chosen not to attend this evening's presidential debate. What message do you think that sends to the voters of Iowa?

Cruz responded with a lot of thanks for the hospitality of supporters around the nation, and then turned to a roundabout answer, apparently trying to kill multiple birds with a single stone, remarking:

Now, secondly, let me say I'm a maniac and everyone on this stage is stupid, fat, and ugly. And Ben, you're a terrible surgeon. Now that we've gotten the Donald Trump portion out of the way...

Kelly wasn't done there, though; she continued by noting the divide between Trump and Cruz, explaining that they at first seemed to work well together, but have more recently not had such a great relationship. Cruz seemed to try to avoid the bait, stating:

Well, let me be clear, if Donald engages in insults or anybody else, I don't intend to reciprocate. I have not insulted Donald personally and I don't intend to. I am glad Donald is running. I'm glad he has produced enormous enthusiasm, and, every Donald Trump voter or potential voter, I hope to earn your support. I know everyone else on this stage hopes to earn your support.

He also went on to explicate that there is a difference between personal insults and attacks, ad hominems and substance. He indicated that his intentions were always a focus on the issues.

Marco Rubio took an alternate approach, calling Trump "an entertaining guy," as if to patronize his place in the race for the presidency. He said:

Jeb Bush, on the other hand, seemed to take the most lighthearted approach, divulging this truth:

I kind of miss Donald Trump. He was a little teddy bear to me.

All right, then! Well, 27 mentions may not sound so high, but it's not bad when compared to Christie's and Kasich's respective 31 mentions — and they were both present for the event! This may just go to show that nobody can stop discussing Trump, even if they wish to do so.