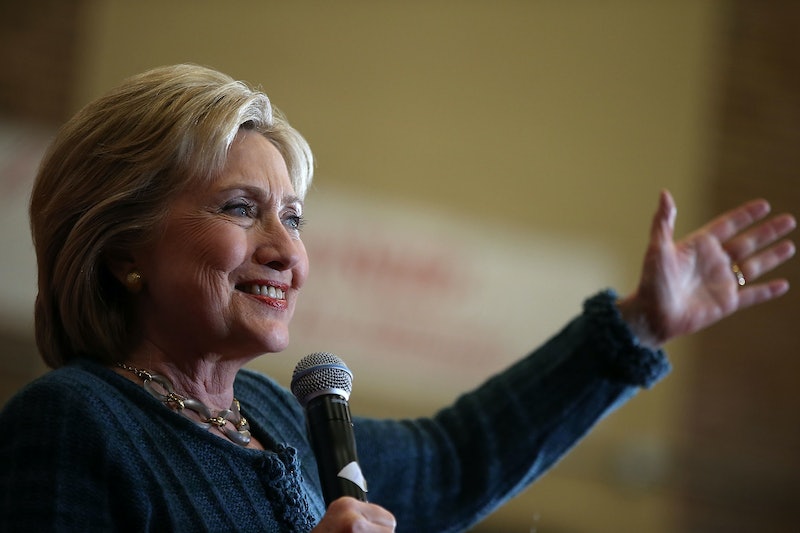 The namesake of the fair pay act President Obama signed into law immediately after taking office in 2009, Lilly Ledbetter, endorsed Hillary Clinton for president on Friday. Ledbetter said Clinton is a "fierce and uncompromising champion for women, for basic fairness, and for opportunity for everyone" in an essay endorsing the Democrat. As a woman who's spent the past 20 years working to close the wage gap after discovering that she was paid significantly less than her male counterparts, Ledbetter understands better than anyone how important equal pay is and thinks Clinton is the best candidate to achieve it.

Ledbetter sued her former employer, Goodyear Tire & Rubber Co., for pay discrimination in 1998. The case went all the way to the Supreme Court, which ruled in Goodyear's favor because Ledbetter had missed the statute of limitations requiring an employee to file a suit within 180 days of their first unfair paycheck (despite the fact that she had no way of knowing she was being paid less). The Lilly Ledbetter Fair Pay Act now allows that 180-day limit to reset with every paycheck affected by discrimination, giving women more time to take action when they realize they are being paid unfairly.

"Hillary understands that these issues can't be dismissed or pushed to the sidelines. They're not just 'social issues' — they're fundamental to our country's economic future, and they are at the heart of everything she's fighting for on this campaign," Ledbetter wrote in her endorsement essay. "For Hillary, this is about more than politics — it’s personal. She just gets it, plain and simple."

Clinton has advocated for closing the wage gap since she began running for president. The Democrat even co-sponsored the Fair Pay Act in the Senate and frequently brings up Ledbetter's story when explaining the employment struggles women face every day. An ad the Clinton campaign released in Iowa and New Hampshire in December focused on ending the wage gap between working Americans and rich CEOs, vowing to put an emphasis on equal pay for women and raising the minimum wage (which also disproportionately affects women).

The endorsement comes at a crucial time for Clinton, as she's neck and neck with Bernie Sanders in polls in Iowa just days before the state votes in the first caucuses of the 2016 election. This isn't the former secretary of state's first major endorsement, but it could help woo female voters concerned about equal pay to Clinton's team. The support of the Fair Pay Act's namesake certainly won't hurt.