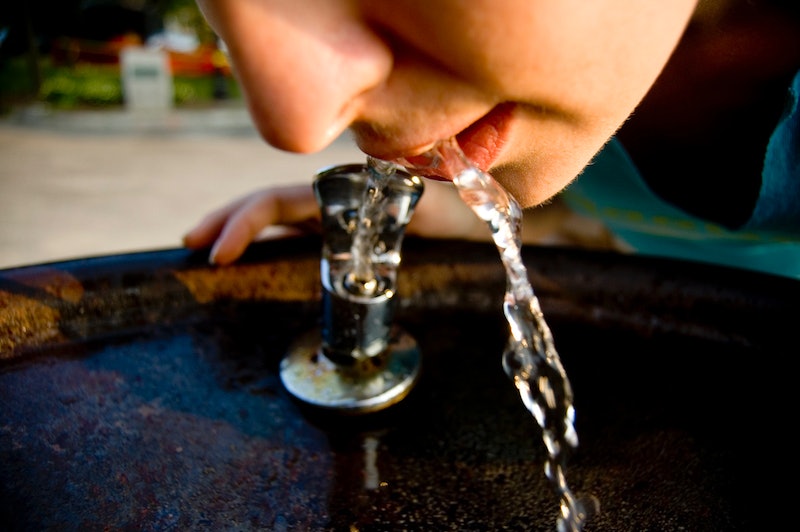 For anyone who isn’t drinking enough water on a daily basis, it's false to think if you’re not feeling very thirsty, that you’re body isn’t very thirsty. There are many weird signs you’re dehydrated that you might not realize, and therefore might have been unknowingly avoiding.

It might come as shock to very few that if we’re dehydrated we could find ourselves suffering from headaches and a feeling of dizziness. Even more obvious might be if we notice our urine is a dark yellow color. Many of us can attest to hearing these signs over and over. However, dehydration does a lot more than that to our bodies. Sometimes the effects are very sneaky, and we might be masking them as something else.

Water has many positive effects on our bodies that we might take for granted. For example, getting enough water is key to preventing illness, as we’ll talk about in more detail in this article. According to WebMD, water is good for our brains, muscles, and skin, just to name a few. How much should we be getting? According to the Mayo Clinic, the average adult should aim for about eight 8-ounce glasses of water each day. It’s easy to do if you set your mind to it, and you’re mind will be happy you did.

Here are six weird signs you’re dehydrated, which might be ones you’ve never mentally connected with water consumption before. If they seem all too familiar to you, hit that office water cooler ASAP, girl.

1. You’re Not Sweating During Workouts

Our bodies — even if we’re the kind of people who are prone to sweating a great deal — can actually stop sweating all together if we’re dehydrated. It seems sort of obvious when you think about it, but here’s the more complicated reason why, according to J. Timothy Lightfoot, Ph.D., director of the Huffines Institute for Sports Medicine and Human Performance at Texas A&M University. Lightfoot explained to Huffington Post that when our bodies become too hot — as they do when we’re exercising — they release the extra heat through processes like sweating in order to keep our core temperatures regulated. If there isn’t enough water in our bodies to produce sweat, we miss out on that regulating system. Not only will we stop sweating, but we put ourselves at risk for over-heating as well, as the heat stays trapped inside the body and core temperatures rise.

This is probably a little ignorant on my part, but whenever anyone has ever questioned me on my skin type I’ve always noted that it’s both oily and dry. I’d tend to get confused looks, until a colleague of mine who’s a trained makeup artist told me I had it wrong. I don’t have a dual skin type as I’d been claiming. I have oily skin that gets dry at times because I don’t drink enough water. According to The International Dermal Institute, when skin gets dehydrated, it’s lacking in moisture and not oil. That said, those with naturally oily skin can certainly see dry patches if they aren’t providing their bodies with enough moisture, like water.

3. Your Breath Has Taken A Turn For The Worse

A nasty yet very real side effect of being dehydrated… horrible breath. Why? According to Everyday Health, our saliva has antibacterial properties, therefore preventing the bacterial overgrowth that leads to bad breath. If we’re not drinking enough water, our bodies can’t make enough saliva. See the cycle?

Ever said something like, “There must be something wrong with me. I can’t stop eating!” In those cases there might actually be something wrong with you — lack of H20. RD Alissa Rumsey, spokesperson for the American Academy of Nutrition and Dietetics, spoke to Health and noted, “Mild dehydration is often masked as feelings of hunger, when really your body just needs fluids.” According to Health, this happens due to confusion in the hypothalamus, the part of the brain that regulates both appetite and thirst. That mix up in the brain can find you reaching for a carton of ice cream instead of what your body really needs: water.

If you’re closely watching your nutrition (or even if you’re not), try drinking a glass of water before you head to the snack cabinet, and then listen to your body. Has that hunger feeling faded? If so, it was likely thirst giving you those pangs in your stomach, and not actual hunger.

5. You Seem To Always Be Getting Sick

Chronic dehydration plays a role in how well your immune system performs. According to Healthline, every organ in the body relies on water, so when you’re not getting enough to replace the fluids you naturally lose (e.g., via sweat, urination, etc.), your cells aren’t getting the nutrients and minerals they need. This leads to a lack of necessary moisture in your mouth, nose and throat — which is vital preventing sickness.

Maybe this is simply because I’m someone who is obsessed with food, but one of the most frustrating things is being on a healthy, balanced diet and exercise plan and managing to gain weight rather than lose it. If you’re currently in this situation, you might have gotten there from not drinking enough water. For those who have tried a dieting app like MyFitnessPal, you’ll know it asks you to track the amount of water you’re drinking each day. This isn’t to give you another thing to worry about — it’s because staying hydrated is a huge component of being able to succeed at your diet. According to LIVESTRONG, dehydration slows the metabolism, negatively affects your body’s ability to burn fat, and encourages excess calorie consumption (as we discussed with the hunger vs. thirst point above). It can also contribute specifically to belly fat, LIVESTRONG noted.

As we can now see more clearly than ever, staying hydrated is beneficial for our bodies in more ways than one. By sticking to the recommended eight 8-ounce glasses of water each day you can avoid any of the above, strange signs of dehydration. If you need some tips on accomplishing that total, check out these sneaky ways to drink more water every day.