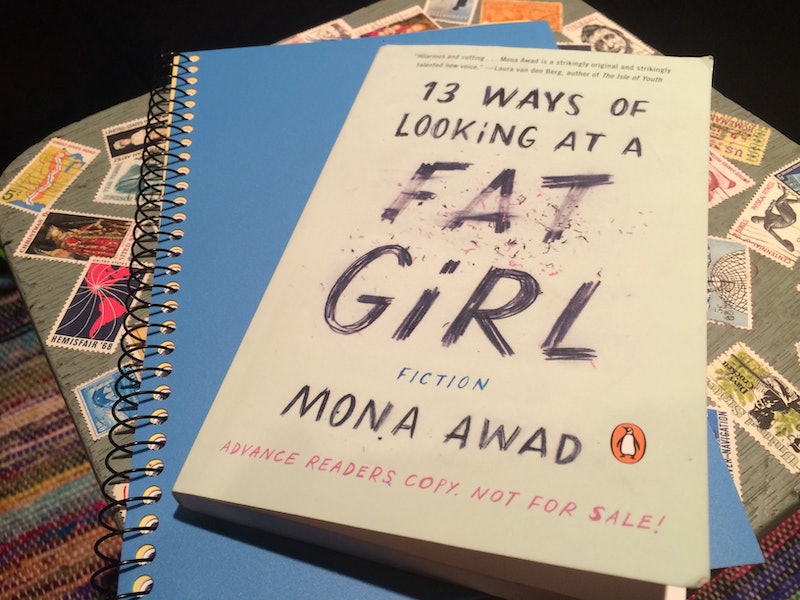 I'll give it to you straight: You're going to love Mona Awad's 13 Ways of Looking at a Fat Girl. Perceptive and original, this book is a smart and engrossing exploration of identity. Diving into both descriptors, "fat" and "girl," Awad hits every nail on every head, shining light into every crack and crevice of what it is to be who you are.

Broken up into 13 distinct stories, 13 Ways of Looking at a Fat Girl is a portrait of a young woman named Elizabeth (though at times she goes by Beth, Lizzie, Liz, and every variation). We see Elizabeth from her teenaged years through adulthood, looking on as she changes as a person. Throughout her life, Elizabeth defines herself by her weight. We explore how her character is both fueled by and dragged down by her own self-esteem and self-perception, and we also peer into how those around her see her.

The stories have a wide range of themes. The first story, "When We Were Against the Universe," depicts Elizabeth and her best friend as teenagers and their complicated grip on sexuality. Another, "She'll Do Anything," is told from Elizabeth's husband's perspective, as he struggles with how his wife has changed. Yet another, "The von Fursterberg and I," zooms in on Elizabeth's relationship with a particular dress and fitting room attendant, and her desperate need for the dress to be right.

This book will both shock you and be familiar to you. It will treat you, and it will slam into you. Here's thirteen reasons why I know you're gong to love it.

1. You'll Relate to Something, No Matter How You Identify

Above anything else, Awad has a distinct ability to pull out tiny feelings and thoughts that we push down within ourselves. Even if you're not demographically anything like Elizabeth, there are a million tiny ways in which she'll express something that you've experienced but never been able to pin down.

2. It Gives a Clear Picture of What It's Really Like to Be a Plus-Sized Woman

It's no secret that plus-sized women are often misrepresented in the media. There's also a tendency for books about plus-sized girls to be only about eating disorders, depression, and a road to skinniness (which is often shown as being synonymous with happiness). But Awad paints both an accurate and an original portrait of this self-described "fat girl," and how her weight and the way she perceives her body affect her in every moment. Elizabeth as a character is not a vessel for a lesson on obesity, but rather, a fully-fledged human whose body is a part of who she is and how she experiences the world.

3. Actually, It Reveals a Lot About Being Any Type of Woman

Elizabeth's identity goes far beyond her body image, and Awad does a particularly brilliant job of showcasing the complicated realm of womanhood. From the development of her sexuality to her relationship with changing room attendants, Elizabeth's story is filled with touches (both large and small) of how much expectation and effort are fueled into a woman's identity.

4. The Prose Is on Point

Awad has a masterful balance. Her prose is so controlled and it flows so well, creating images and ideas with the perfect touch. It's fantastic to dig into.

5. The Structure Is SO cool

Thirteen stories, all following one woman, progressing throughout her life. Usually they're told from her perspective, but in a few they're told in third person by other people who know her. This all yields a fascinating, original way for the reader to be immersed in the story.

6. You Really Dig Into Elizabeth/Beth/Lizzie's Character

As we see Elizabeth from so many different parts of her life and from so many perspectives, this book really comes down to how our understanding of her evolves and deepens. It's character explored in a way that I've never seen before, and it's completely compelling.

7. Each Story Has Its Own Unique Flair

Though they exist in the same life, each of these stories is completely its own, and each one gives its own special something to Elizabeth's story.

8. The Title Is a Reference to a Fantastic Poem

Poetry nerds holla! I love that the title is a call to Wallace Stevens' classic "Thirteen Ways of Looking at a Blackbird." Like the poem, this book peers at Elizabeth from myriad angles, and only by piecing them together can we begin to get a real understanding of who she is.

9. It Explores a Mother-Daughter Relationship in Intense Ways

Elizabeth's mother is an important presence in this book. The story "My Mother's Idea of Sexy" was a particularly hard-hitting piece for me, as it depicted a trip to visit her mother after she had lost some weight, and the strange voyeurism that exists between mother and daughter. Their relationship has a very realistic complicatedness to it, with the characters embodying both tendencies to avoid confrontation and to give into harsh truths.

10. It Shows an Accurate Portrait of How Female Friendships Can Be

Elizabeth's relationships with the other women around her wax and wane in an amazingly familiar way. Her high school best friend Mel remains present throughout the book; we see how their friendship changes color over time, and also how deeply it has impacted Elizabeth. We can also find familiarity in the way Elizabeth interacts with other women- co-workers, estheticians, neighbors and the different forces that are play in any female-female interaction. While so often writing paints female friendships in extremes (either extraordinarily fluffy or desperately hateful), Awad does a great job of expressing the true nuance within them.

There are many things that we don't want to admit about ourselves, and Awad just goes right in for it. Moments of envy, of feeling inadequate, of fantasy, and other complicated experiences are pushed right out into the open, connecting us to the darker parts of our self-esteem. It's absolutely refreshing.

12. It Explores Sex and Relationships with Fascinatingly Fresh Eyes

From high school girls plotting blow jobs, to a co-worker who offers to give her cunnilingus, to her husband's struggle with her change in weight, our exploration of Elizabeth's life brings out threads sexuality that are new to the table and incredibly sharp. Part of this sharpness lies in Awad's distinct ability to balance fantasy and reality: what we want for ourselves versus what we think we can get versus what we already have. Elizabeth's sexual explorations are marked by a constant ranking of her self-worth, a habit that is familiar to any woman, and at the same time, never before exposed in such a raw way.

Sometimes words like "explore" and "dig in" are used as euphemisms for a slow read, but this book is anything but slow. I was drawn in from the very first page, immediately intrigued by the tension between Elizabeth and her best friend Mel in the first story, "When We Were Against the Universe." That tension stays strong in every story as Elizabeth's internal self-assessments rub up against the ways the outside world perceives her.