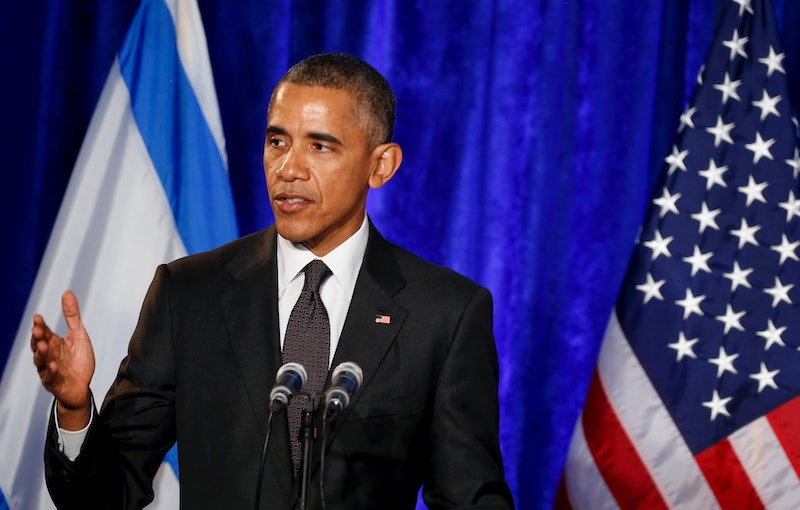 On Friday, President Obama explained his new plan to promote fair pay, and the president championed equal pay for equal work in his speech. Jan. 29 marked the seventh anniversary of the day President Obama signed the Lilly Ledbetter Fair Pay Act into law, drastically extending the amount of time female workers have to file a lawsuit for discriminatory pay. Now, the Democratic leader is taking the fight for gender equality in the workplace one step further. "All of us have to make sure that all of our young girls know that we're invested in their success," President Obama said Friday.

Expanding on a previous executive order from the Obama administration that applied only to federal contractors, the plan announced Friday will require companies with more than 100 employees to include salary information on forms they already submit to the Equal Employment Opportunity Commission on employees’ sex, age, and job groups. "This won't solve every problem," the president said. "We've still got to get more women and girls into high-paying fields like science and technology, engineering and math." However, this new requirement will allow any discrimination to be more easily detected and will speed up investigations, as it's currently difficult for the government or employees themselves to discover unfair pay practices.

President Obama's speech elicited some giggles when he called for employers to stop punishing women for getting pregnant, choosing a very roundabout way to mention men's role in pregnancy. He said: "We've still got to make sure that women are not penalized or held back in the workplace simply for starting a family. Guys, we're responsible for the family thing too, and they're already doing more work than we are in getting that thing going — they shouldn't be penalized twice or three times."

On top of requiring employers to disclose their workers' salaries, Obama said in his speech that America still needs to raise the minimum wage, guarantee paid sick and family leave, fully protect pregnant workers, and pass the Paycheck Fairness Act. Many Republicans in Congress have argued that discrimination based on an employee's gender is already illegal, so additional laws and protections aren't necessary. Sadly though, unfair treatment and the gender wage gap persist, with women still making only 79 cents for every dollar men make.

Champions of gender equality praised President Obama's decision to honor the anniversary of the Lilly Ledbetter Fair Pay Act by taking more action against discrimination. His speech not only announced his new plan, but also gave a voice to the myriad of workplace issues women face and reminded the country that the fight isn't over.