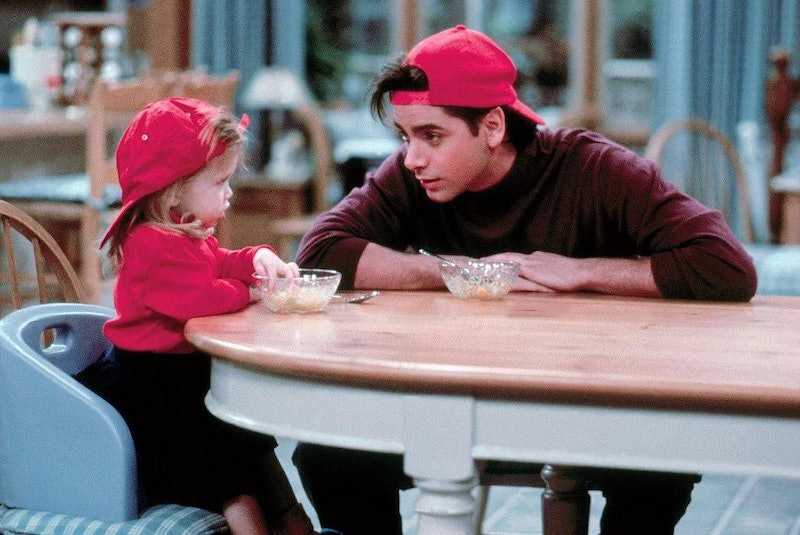 There's just something about a reformed bad boy that makes you believe in the power of love, and Uncle Jesse was the ultimate reformed bad boy. Of course, throughout the run of Full House, he had his fair share of wild moments, but it was the times that he stepped off the motorcycle and picked up the bottle that made us fall in love with Uncle Jesse a little more. Of course, his gorgeous brunette locks and incredible leather jacket didn't hurt either. It's hard to imagine a world without his adorable protectiveness and downright fatherly love towards his two twins, and soon we'll get to see more sweet moments.

When Fuller House premieres on Netflix, it will be interesting to see where Jesse, Becky, and their loveable twin boys have been all of these years. If I know one thing, they will be together and stronger than ever. I'm that sure over the years, Jesse's bad boy ways have been tamed to a dull whisper, but that doesn't mean he has lost the art of making us all swoon. However, it may never be outdone by the original Full House and the Uncle Jesse moments that took my breath away.

1. When He Sings A Lullaby To Michelle

OK, all the guys were adorable in this one, but Jesse's solo had me wishing I was his teddy bear too. Any time he sings, it's a beautiful thing. Someone should consider doing a show where John Stamos just sings Elvis songs, because I would totally watch.

2. When He Sings A Lullaby To Nicky And Alex

This time he's singing another lullaby, but he's got a guitar this time. That basically upped the ante by about a million. It's like he topped himself.

3. When He Finds Out He Is Going To Be A Dad

Becky tells Jesse that she is having a baby in the strangest, yet cutest, way possible — a game of Pictionary. His reaction is not only adorable, but totally realistic — sort of. It's one of my favorite moments of the show.

4. The Time He Makes It Snow In San Francisco

He may have had to order 17,000 snow cones, but nothing is too much for Jesse and Becky. This is the cutest romantic gesture to ever be grace television, in my humble opinion. How could you not love him after this?

5. The Wedding Song He Writes For Becky

"If every word I said could make you laugh, I'd talk forever." I'm crying just listening to this song right now. It may be a little cheesy, and that one tear rolling down Becky's cheek may be a bit of emotional overkill, but it gets me every. Single. Time.

In this very last scene of Full House, Jesse tries to explain to Michelle that she lost her memory, and he does it in the cutest possible way. This may not have been his best moment, but it was definitely one of his most attractive. He is working that gray flannel.

Uncle Jesse was my all time favorite character from the show, and the one whose storyline I'm most excited to see continue when Fuller House premieres. It will be interesting to see the different ways he has grown, and all the times he'll make us fall even deeper in love with his character. As long as he promises to "have mercy" on our poor hearts.

More like this
Jesse Tyler Ferguson Had A Funny Run-In With A Fellow ‘Modern Family’ Alum
By Grace Wehniainen
Drake’s Surprise Performance With The Backstreet Boys Was Fans’ Fire
By Stephanie Topacio Long
'Friends' Creator Marta Kauffman Opened Up About Misgendering A Guest Character
By Grace Wehniainen
“The Door Is Always Open” For Another 'Breaking Bad' Spin-Off, Says AMC Boss
By El Hunt
Get Even More From Bustle — Sign Up For The Newsletter